The good news is that managers feel more comfortable about discussing mental health issues. The bad is that 70% have had to support an individual suffering mental ill-health and 35% of those who have experienced it say work is a factor, according to research from Roffey Park

Managers are feeling more comfortable about discussing mental health issues and believe their organisation’s culture is more open about and accepting of such issues. However, more than a third who have personally suffered mental ill-health say work is a contributing factor.

Michael Jenkins, chief executive of Roffey Park, says the findings of this year’s survey give some cause for optimism but there is still more to do.

“Mental health workers, counsellors and campaigners, with whom we interact on a weekly basis, share an ongoing anxiety that the upsurge in awareness about mental health could soon start to dissipate and the gains we’ve made over the past year could be at risk. We cannot allow this to happen.” 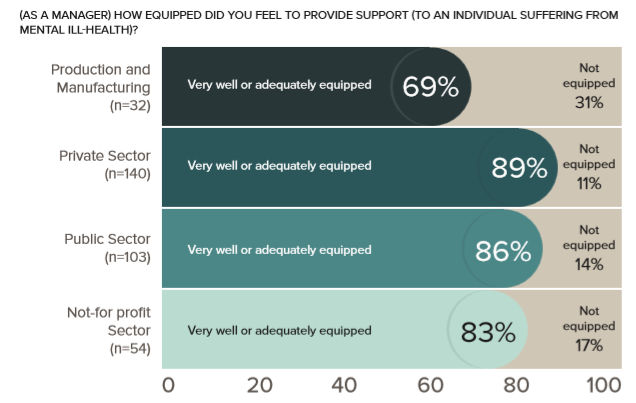 Awareness training, such as mental health first aid courses; access to external specialists; access to an information and wellbeing site on the company intranet and partnership with organisations such as MIND have been most helpful in helping managers deal with mental ill-health in the workplace.

Respondents to the Roffey Park survey are significantly more aware of mental health issues than the population as a whole. The UK government’s Thriving at Work: Stevenson/Farmer review of mental health and employers, published in January 2018 found only 11% of employees spoke about a recent mental health problem with their line manager and more than a half of people would choose not to discuss a mental health issue with their immediate boss. Just 24% of managers cited in the review receive any mental health training at work.

The Roffey Park findings on attitudes to mental health are part of a wider survey taking in managers' views on performance management, artificial intelligence, productivity and diversity. As a result, the leadership institute has discovered factors that support or inhibit the spread of effective management practices (top visual).

The gains we’ve made over the past year could be at risk. We cannot allow this to happen