Balancing care and performance is the new sweet spot of leadership, finds a huge global study of leaders and employees. But too often leaders get caught in the empathy trap, resulting in burnout and poor decisions. Rasmus Hougaard, named one of the top leadership thinkers in the world, says the answer is to move into compassionate leadership 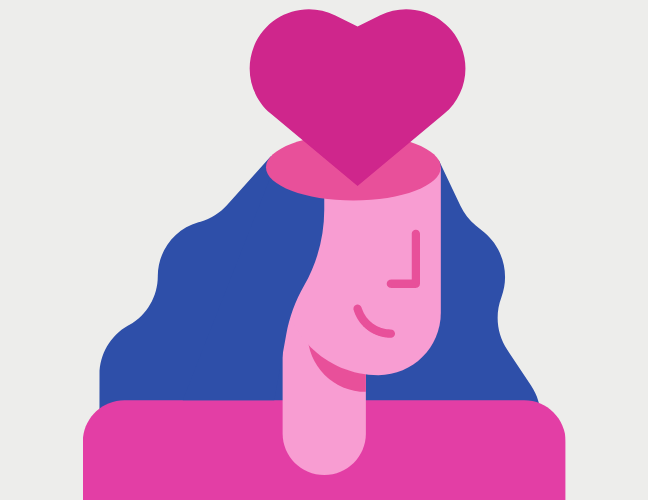 Leaders who are able to integrate care with performance have more than two times the positive impact than those who do not.

This is the finding of research from interviews with 350 executives from global organisations, combined with more than one million data points from more than 75,000 leader and employees from more than 1,000 companies in 72 countries, collected by Harvard Busines Review and Forbes. 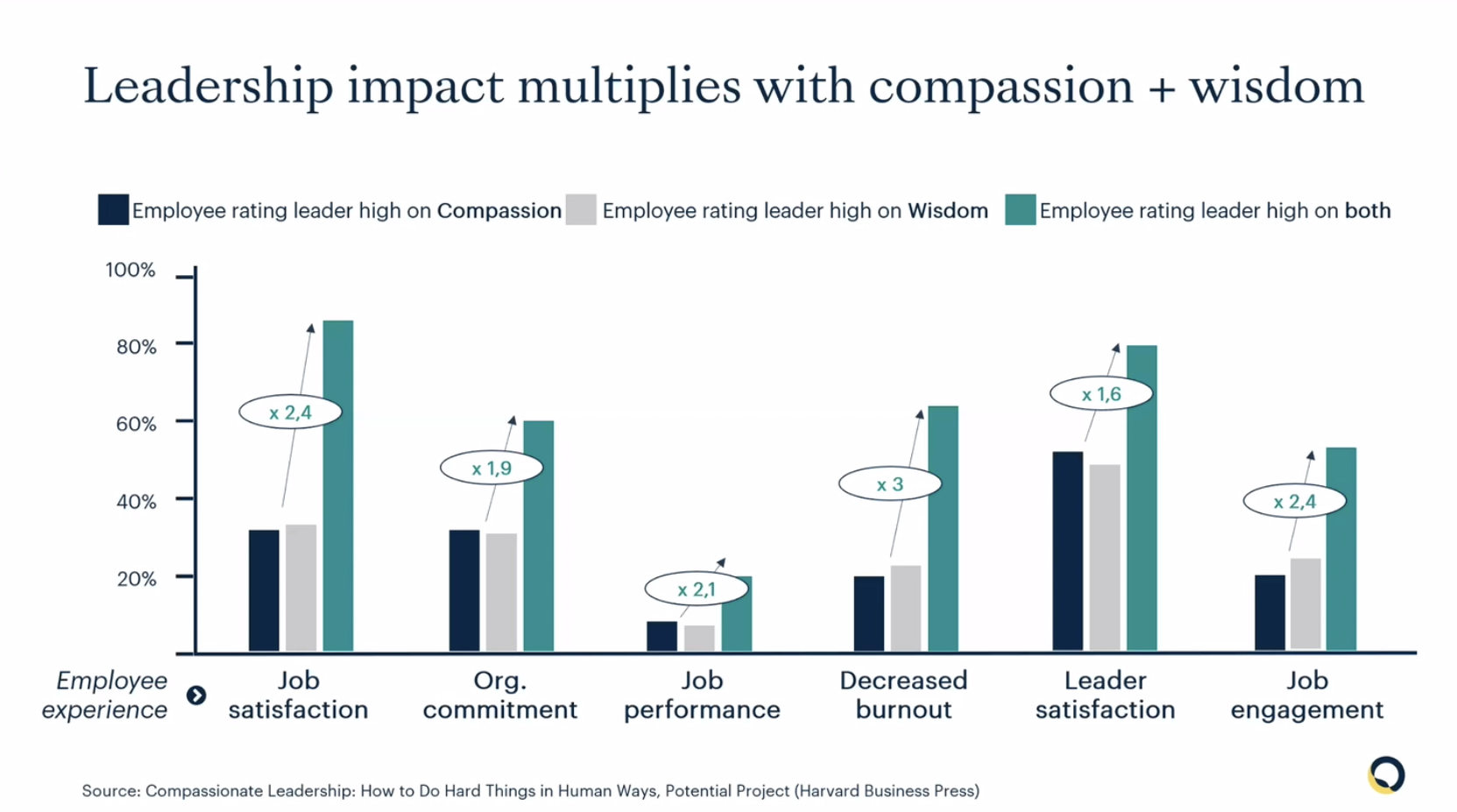 “Modern leadership in the 21st century requires compassion – which is genuine care combined with an intention to support and help – with wisdom – the courage to be transparent and to do what needs to be done,” explains Rasmus Hougaard, founder and managing director of Potential Project, and Hougaard one of Thinkers50 eight leading leadership thinkers in the world as well as one of the emerging business thinkers most likely to shape the future of business.

Hougaard, who together with colleague Jacqueline Carter has written the book Compassionate Leadership, says the problem is that today too many leaders think they need to make a choice between being hard and being human.

“One of the biggest challenges for leaders is how to do things in a human way. But in fact, doing the right thing is often the most human thing to do. Balancing the heart with driving for performance is not a dichotomy. They are not opposites. They go very well together if we can train ourselves to do that. And the ability to combine these two seeming opposites comes down to one thing – compassionate leadership.”

However, often leaders who try to be compassionate get stuck in empathy. Empathy is an emotion and can be simply understood as ‘I feel with you’. The issue with this is that there is a big downside to repeatedly taking on the suffering of the people you lead. It can result in distress and burnout. It can mean you lack diversity because we tend to empathise with those that look like ourselves or that are close to us. It means we can be more narrow-minded and make poor moral decisions.

Instead leaders need to move out of empathy and into compassion, which is not an emotion but an intention to be here to help. It is action-orientated. Hougaard’s research finds that leaders that show up with compassion versus empathy have a 200% lower risk of burnouts.

“When we, as leaders, show up with compassion, we have a stronger sense of empowerment, a stronger sense of control, more sustainable action and create more social connection and more happiness for ourselves and the people we lead,” he says. “If we manage to move out of the empathetic hijack and into compassion we'll be in a much stronger place.”

So leaders need to connect with empathy and lead with compassion. But the majority of leaders are “alarmingly” out of sync with their people, says Hougaard. And that is leading to some negative outcomes.

His research finds 45% of leaders are in sync with their employees/followers. In other words there is a shared reality – the leaders and their followers have an equal understanding of the humanity of the leader, for example.

Meanwhile, You Leaders – also part of the 55% – also have a negative impact, but this time on themselves. A You Leader feels they are not that kind as leaders but their people feel they are much kinder than they feel. That may sound a good thing but because there's no synchronicity, no shared reality, the negative impact is that such leaders have an 18% higher risk of burnouts, 42% higher intention to quit and 10% higher stress. 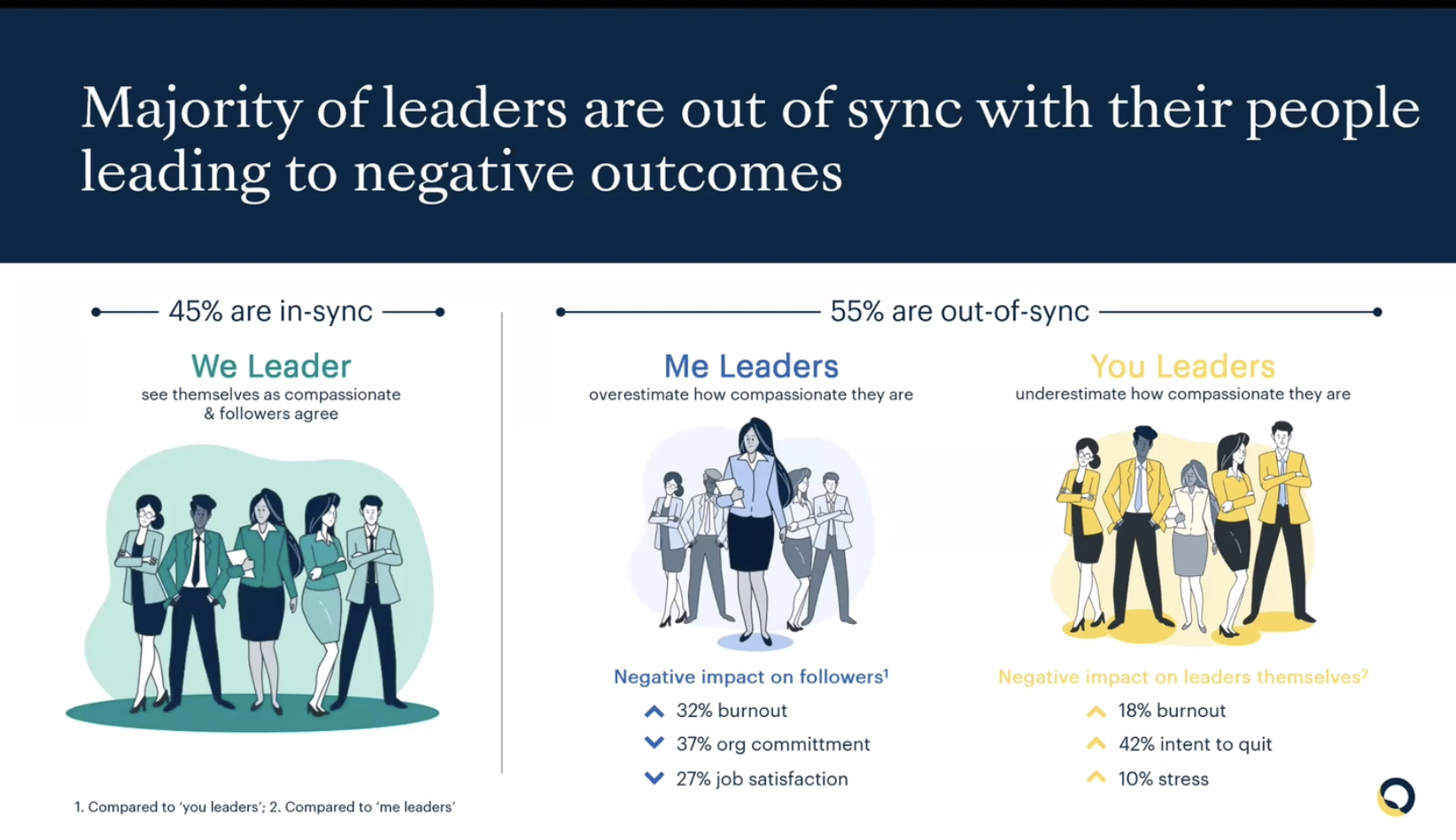 Other findings from the research are that leaders climbing the corporate ladder are seen as less compassionate, while leaders in certain industries tend to overestimate their compassion and wisdom versus how they're perceived by followers. For example, while technology leaders think they are both quite compassionate and high on wisdom technology employees find that their leaders are certainly not either of those. In contrast government leaders think they are quite low on both while their employees find the exact opposite.

How to become a wiser, more compassionate leader?

According to Rasmus, here are four areas leaders can work on to develop their compassion and wisdom:

1.    Caring presence. The ability to be here now when you do hard things. To be really present with the ones that you're with when you're doing difficult conversations, feedback, restructure or whatever.

2.    Carrying courage. Having the courage to go into those difficult conversations, which by the way, you can only do when you're actually present in that situation. Courage over comfort. It is always comfortable to refrain from doing the hard things. But it will never lead you to grow or the people you're working with.

3.    Caring candour. To have the ability to be candid and direct but in a caring way. It is very different from radical candour or brutal honesty, all those other things where it's just about sharing the hard news. That doesn't work. You need to combine it with care. Direct is faster. If you’re spending a lot of time beating around the bush and not getting to the core of the issue you're wasting time  or making it unclear to others what  you're actually trying to say.

4.    Caring transparency. Clarity is kindness. It is only when you are clear and transparent about the difficulties that may be coming, the uncertainty of the future or the financial downturn that you treat people as adults and give them the chance to act in the most appropriate way for their own situation. Whereas if you're withholding  you are not giving them a chance, so it's not compassionate, it's not kind and it is not wise.

Compassionate Leadership: How to do hard things in a human way is available now from Harvard Business Review Press