Inclusion and diversity are an enabler of two of the foremost goals for CEOs, growth and value creation, so businesses would be wise to wake up to the fact that top team ethnic and cultural diversity is correlated with profitability around the world
Sian Harrington
PS Editorial 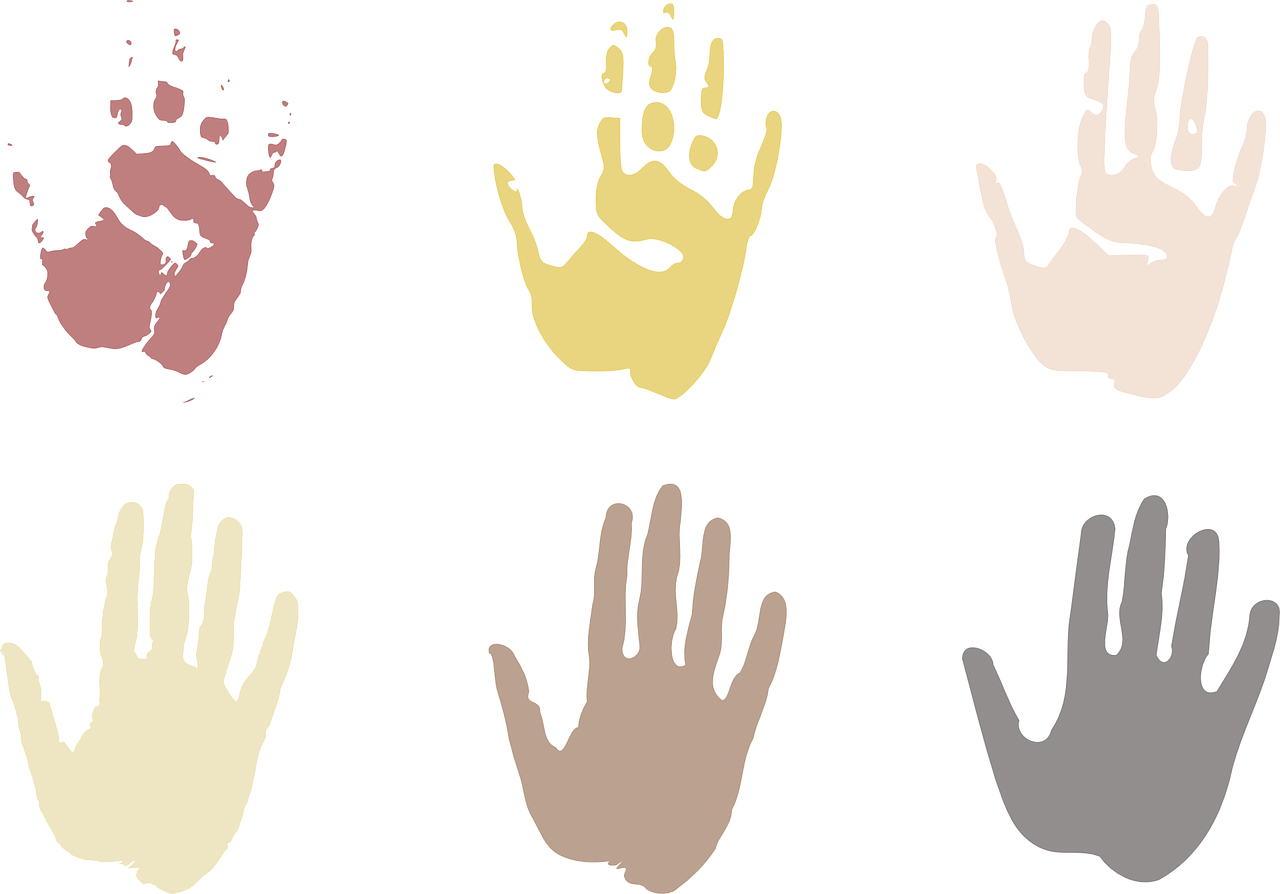 Companies with the most ethnically/culturally diverse boards worldwide are 43% more likely to experience higher profits.

Those corporations with the most ethnically diverse executive teams are 33% more likely to outperform their peers on profitability. Ethnically diverse representation on UK and US executive teams have increased by an average of six and five percentage points respectively, since 2014. However, this was offset by declines in other geographies, leading to an overall lower increase of one percentage point across regions.

There is value in promoting ethnic/cultural diversity in company top teams around the world. For companies, addressing the challenge of building an inclusive company culture across cultural differences could significantly strengthen organisational effectiveness

However, the picture of ethnic and cultural diversity on executive teams is nuanced, says a report Delivering through diversity, from management consultancy McKinsey & Company. Among its sample, South Africa has the highest levels of diverse representation on executive teams, with 16% of executive positions held by blacks. However, McKinsey points out that this must be understood in the context of local demographics: South Africa’s population is 79% black, but among large corporations the large majority of global and national corporate entities are led by white executives (69% in the sample), so McKinsey therefore evaluated South Africa’s diversity from this perspective, defining black South Africans as the minority. 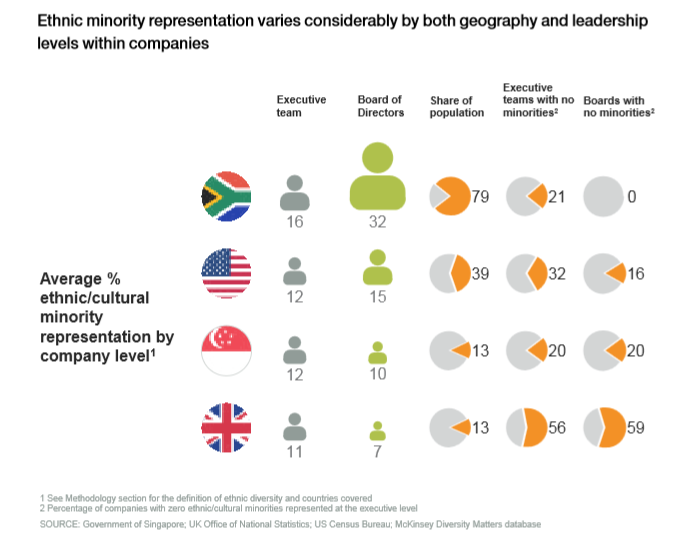 McKinsey says the data shows there is value in promoting ethnic/cultural diversity in company top teams around the world.

“For companies, addressing the challenge of building an inclusive company culture across cultural differences could significantly strengthen organisational effectiveness,” says the report’s authors.

“Further, ethnic/cultural diversity at the highest levels of company leadership could serve as a signal to employees and other stakeholders that the organisation truly understands and values the community and customers that they serve.” 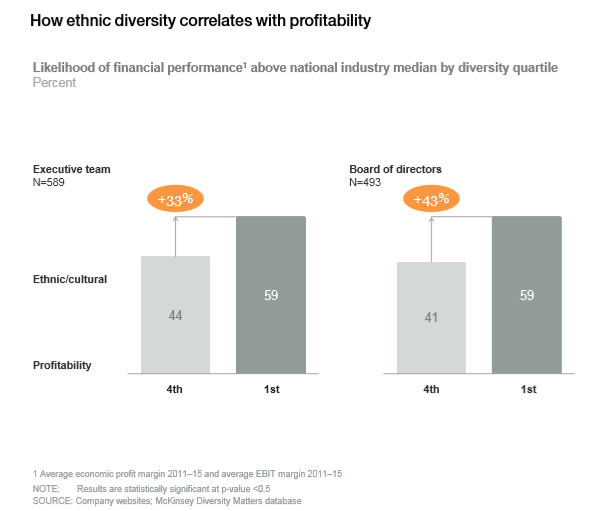 However, it points out that progress is slow.

“Many companies struggle to materially increase representation levels of diverse talent, gain an understanding of where in their organisations diversity matters most, and create truly inclusive organisational cultures to reap the benefits of diversity.

“The tangible impact these efforts have on organisational effectiveness, but also on business performance, remains elusive. For many global CEOs, the extent to which taking action on inclusion and diversity can contribute to their path to growth remains unclear.”

Gender plays a role in ethnic and cultural diversity. According to the research, black women executives are under-represented in line roles, and may face a harderpath to CEO.

Within McKinsey’s US sample, not only do women hold a disproportionately small share of line roles on executive teams, but women of colour (including Black, Latina and Asian women) hold an even smaller share.

“Black female executives specifically are more than twice as likely to be in staff roles than in line roles, and our sample denotes an absence of black female CEOs,” the authors say.

“Other US studies, including our recent Women in the Workplace 2017 report, have found that black women suffer a double burden of bias that keeps them from the uppermost levels of corporate leadership. Under-representation on executive teams in general, and in line roles in particular, could be an important piece of this story. Corporate leaders will need a more granular understanding of the dynamics across inherent and acquired diversity dimensions to address this opportunity fully.” 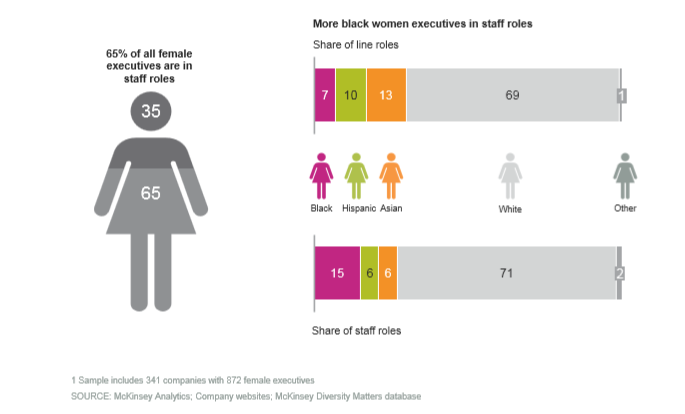 Four key imperatives in your inclusion and diversity agenda

1. Articulate and cascade CEO commitment to galvanise your organisation

Companies increasingly recognise that commitment to inclusion and diversity starts at the top, with many publicly committing to an inclusion and diversity (I&D) agenda. Leading companies go further by cascading this commitment through their organisations and particularly to middle management. They promote ownership by their core businesses – encouraging role-modelling and holding to account their executives and managers for delivery. They ensure these efforts are sufficiently resourced and supported centrally.

2. Define I&D priorities based on what drives your business growth strategy

Companies succeeding in I&D are able to clearly articulate the link between their I&D goals and specific business growth priorities. This is often the result of investment in internal research to understand what aspects of I&D act as performance enablers for specific business metrics, such as productivity, customer retention, risk management or time to market, stemming from an understanding of how I&D links to specific value drivers such as customer insight, innovation or decision-making. Leading companies are able to combine this with a detailed, data and analytics-informed understanding of their pipeline to identify the mix of inherent and acquired diversity attributes that are most relevant for their organisation and should be central to their I&D approach

3. Craft a targeted portfolio of I&D initiatives to transform your organisation

Leading companies use the above thinking to prioritise the portfolio of I&D initiatives they invest in, ensuring alignment with their overall growth strategy. They recognise the need for this to go hand in hand with building a truly inclusive organisational culture. They use this combination of ‘hard’ and ‘soft-wiring’ to create a coherent narrative and programme which resonates with their employees and other stakeholders and helps drive sustainable change.

Leading companies recognise that, while there is an imperative for an overall consistent direction for their I&D strategy, there is both the opportunity and the need to adapt this to different parts of their businesses and the varying geographic and sociocultural contexts in which they operate. Across several of the researched companies, this translated to a degree of local customisation of overall I&D goals and priorities (eg, reflecting varying regulatory contexts and differing starting points), and differing extents of wider local stakeholder engagement and cross-sector collaboration. In some companies this took the form of active pursuit of an advocacy and anti-discrimination agenda that not only motivated employees but also fostered local partnerships with other companies in the industry. In each instance, global I&D teams were careful to ensure ownership by local teams and business units, while providing adequate central support.

BAME
Gender Diversity
talent
Enjoyed this story?
Sign up for our newsletter here.