Resetting capitalism: how organisations can work for progress, people and planet

Capitalism as we know it is unsustainable. It is financially unstable, bad for the environment and politically unpopular. An increasing number of voices, including some of the world's most powerful leaders, are calling for business and society to align their mission, vision and rewards for the common good. How can organisations step up and play their part in this transformation? Robert Gray looks at those businesses leading the way and asks, is capitalism really in crisis?

Capitalism as we have known it is in crisis. Environmental, social and governance (ESG) concerns are taking centre stage in business as never before, with employees, customers and shareholders expecting so much more from corporations than the pursuit of profit. Analysis by Bloomberg Intelligence shows that ESG assets may account for a third of all assets under management globally by 2025, with a combined value exceeding $53 trillion.

The rise of Black Lives Matter and heightened prominence of the environmental movement led by Greta Thunberg and Extinction Rebellion has accelerated the need to rethink our system to tackle the enormous sustainability challenges we face. Alongside this, unease with traditional capitalism has swelled over the last couple of years, thanks in part to the pandemic shining an uncomfortable spotlight on global inequality.

While many young, low paid and unskilled workers have struggled, a boom in asset values has made the rich richer. According to the Financial Times, in 2020 the collective worth of the world’s five wealthiest individuals increased by over $250bn. There’s a glaring disparity between the privileged lives of powerful, ultra-high-net-worth business titans and the vast majority of people on the planet.

The disappearance of many ‘old jobs’ as they are automated out of existence through the rise of artificial intelligence and robotic process automation risks further polarisation as those in certain roles without the right skills become surplus to requirements, victims rather than beneficiaries of disruptive new technologies. Against such a background, it’s no surprise that most people around the world feel indifferent at best about the work they do and the organisation they do it for. Disengagement is the norm.

But what is the antidote to all this? Klaus Schwab, founder and executive chairman of the World Economic Forum, has championed stakeholder capitalism, calling for a global economy that works for progress, people and planet. “We can’t continue with an economic system driven by selfish values, such as short-term profit maximisation, the avoidance of tax and regulation, or the externalising of environmental harm,” he writes. “Instead, we need a society, economy and international community that is designed to care for all people and the entire planet.”

It’s a view that chimes with the outlook of a handful of prominent industrialists. Anand Mahindra, chair of the Mahindra Group, has adopted a business philosophy he calls Rise, sparked by the realisation that his business cannot rely on a relatively narrow customer base of prosperous Indians to grow sustainably. As he sees it, success lies in creating collective value for Mahindra’s entire spectrum of stakeholders – colleagues, business associates, shareholders, potential consumers across the economy, local and global communities and the planet.

Mahindra elaborated on his approach in a Telegraph article on post-COVID capitalism. “Our core purpose is to enable others to rise by driving positive change in their lives. It does not explicitly mention profits, because we believe that if we enable others to rise we will rise with them and profits will inevitably follow.”

Such thinking would have appalled Milton Friedman, one of the most influential economists of the 20th century, who labelled corporate social responsibility a “fundamentally subversive doctrine”. In a free society, Friedman wrote in his book Capitalism and Freedom “there is one and only one social responsibility of business – to use its resources and engage in activities designed to increase its profits so long as it stays within the rules of the game, which is to say, engages in open and free competition without deception or fraud.” 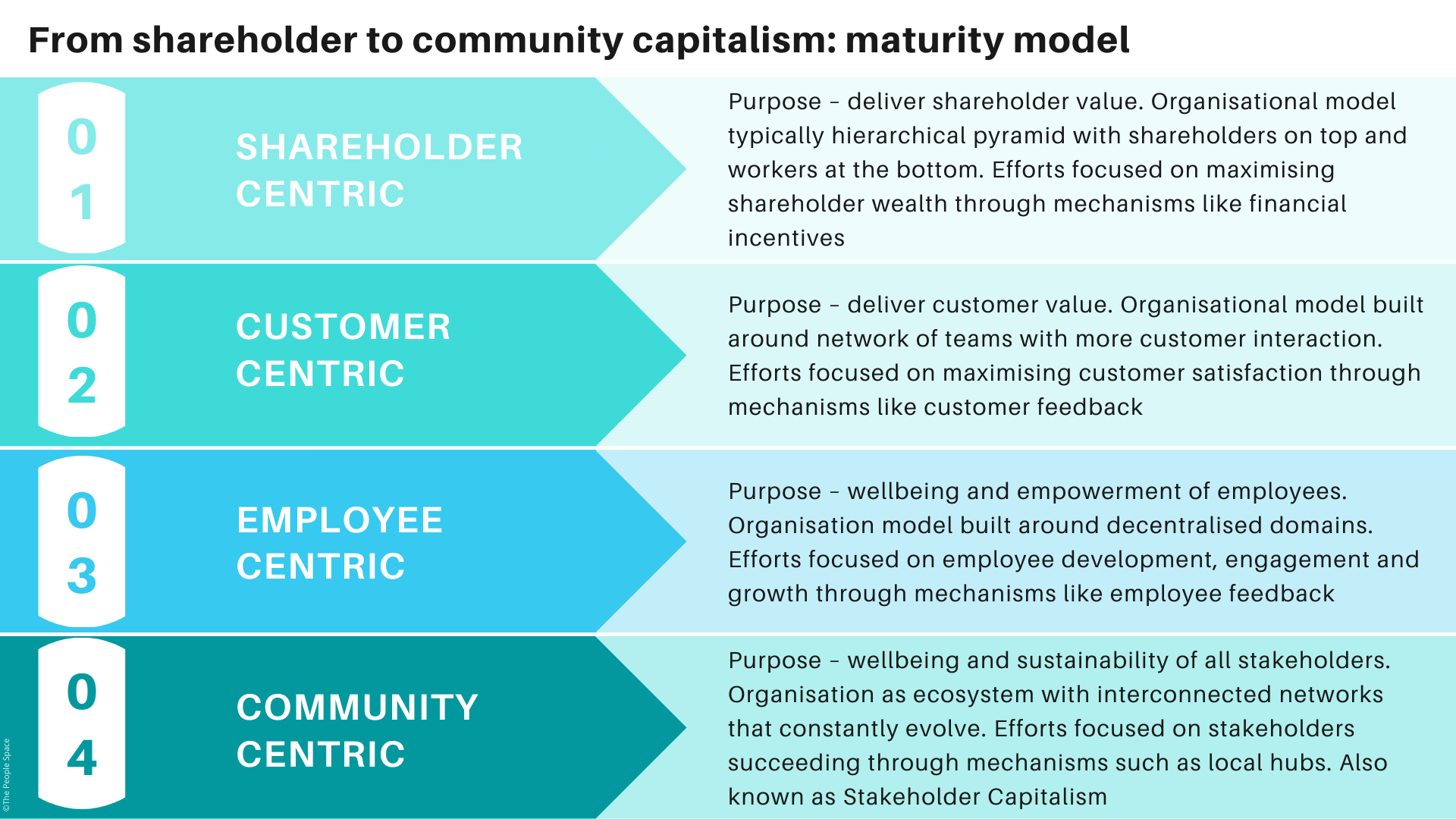 Some still concur with this opinion but it has become a minority view. Nevertheless, fear of eroding profits remains a brake on transformation. “Often what you find when you talk to senior managers in big organisations is that there can be cost penalties for those that go out on a limb doing it when others in the industry aren’t,” says Mark Fenton-O'Creevy, professor of organisational behaviour at Open University Business School.

One way around this, Fenton-O'Creevy observes, could be for leaders in large organisations to gently lobby for legislation that creates a fair playing field. In this age of intense pressure to meet sustainability targets, governments around the world may be more receptive to such overtures than was previously the case.

The pandemic has certainly been an accelerant but, even before it hit, interesting new models were emerging. One mould-breaker is tech company 10Pines, founded in Argentina in 2010, which now has around 85 employees. In this highly transparent business, salaries are agreed through open discussion with colleagues and every year 50% of profits are shared among staff.

There are some challenges with this employee-centric model, concedes 10Pines co-founder Emilio Gutter. One is cultural mismatch with certain clients – it is hard for its people to work with clients who show little trust in their employees. Plus, egalitarianism has a downside when it comes to weighing up risk.

“Our decision-making process requires a lot of alignment,” says Gutter. “Allowing everyone to express their opinions also opens the door for expressing fears. Some decisions are uncertain by nature and require taking some risks, so it’s a challenge to avoid creating a very risk-averse environment when everyone can point out all the reasons an idea might fail, which are plenty when diving into the unknown of something new.”

However, Gutter says the advantages outweigh the drawbacks. He is a firm believer that more organisations should stop talking about people as resources and become more employee-centric by giving more autonomy to their employees and showing greater trust in them. This can begin with small things, like letting people decide whether they want to go to the office or work from home and plan their schedule…but extends to bigger things, such as involving employees in major decisions that will affect the future of the company.

“CEOs and top executives should spend more time listening to their employees, not just the senior-level executives but everyone in their companies,” says Gutter. “It’s really hard to be an employee-centric organisation without knowing how employees really feel or what they think.”

10Pines’ model applies some principles of sociocracy, an employee-focused approach which aims to hold in balance being productive and being equals by 'packaging' authority into domains and distributing that authority into teams, often called ‘circles’.

In this way, explains Ted Rau, operational leader, Sociocracy for All (SoFA), no member’s voice can be ignored, and people start taking each other more seriously because they know that by the end of the discussion everyone has to find consent. This includes decisions on leadership: to stay in the role, a leader needs the consent of the team they lead.

“This system rewards different behaviour from hierarchical systems because now the trusted and knowledgeable people get selected into leadership and not the loudest,” says Rau. Plainly, this is not a system that will appeal to noisy and ineffective leaders.

Another model that has gained some traction in recent years is community capitalism which, as the name suggests, prioritises the wellbeing and sustainability of the community – whether that be geographically local or a community of shared interests. An interesting example is Buurtzorg, which in a little over a decade has revolutionised healthcare in the Netherlands through 1,000-plus small, self-organising teams that deliver home nursing care all over the country. They use Buurtzorg’s ‘onion model’ to leverage a variety of available resources to provide clients with the best possible care.

Founder Jos de Blok believes capitalism has brought a lot of damage to healthcare professionals and patients. He created Buurtzorg so that nurses could work based on their professional ethics with the autonomy to do what’s needed. It’s a model he argues could work across many sectors, even in banking. “As a bank, your purpose is to sell many financial products to earn a lot of money. But a bank could say, ‘now we have a higher purpose as a bank. We want to reduce the financial problems of people and find good solutions for that. Then we will have a connection with clients based on trust and sustainable value for the future’.”

In de Blok’s opinion, moving to a community-centric model requires the right “worldview” – one with less focus on earning money. Making it happen may need businesses to become more selective about their shareholders, although the rise of ethical and ESG-driven investment should make finding investors who are keen on the model less of a problem than was once the case.

“If you want to not only talk the talk, then you have to be transparent about what you are doing – clear on the way you are doing it and on how you will share your profits,” advises de Blok. “You can’t hide behind a marketing way of doing things. If it’s not real, people will see that in the end.”

“I am very fond of saying that most large organisations are finely tuned to meet the challenges they faced 20 years ago,” says Fenton-O'Creevy. “Mindset does need to change. There are a lot of things that people take for granted in their industry and these have become so entrenched that you don’t think about them anymore, they are part of the invisible background. Rethinking those kinds of things is quite difficult, although the pandemic has loosened up a great deal of that. People have managed to do in organisations things they didn’t believe possible.”

So will we, as organisational leaders, help to reset capitalism? Or will the new post-pandemic world of work reset us?

AboutGet in TouchBecome a Brand PartnerPrivacy PolicyTerms of Use
© 2015-2021 The People Space. The People Space is a trading name of On and Off Communcations Limited (7051898).
Website by BrightPie.