Creating a winning culture of invention and discovery

Problem solvers, innovators, collaborators and revolutionaries: this is how North American utility giant Southern Company views its 32,500 employees. By harnessing their creativity, the company is future-proofing its business and has created an innovative culture in the process 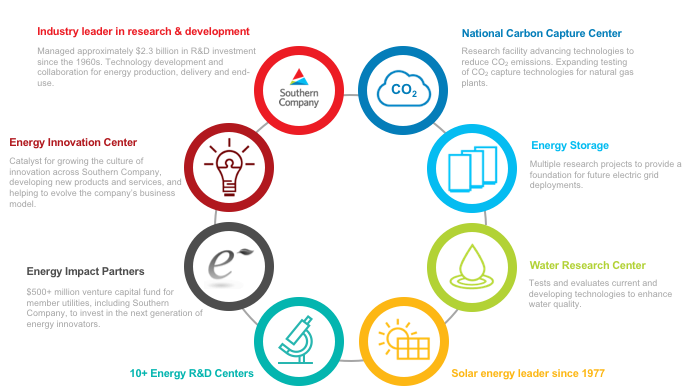 Southern Company is one of North America’s largest utility companies, serving nine million customers and operating nearly 200,000 miles of electric transmission and distribution lines and more than 80,000 miles of natural gas pipeline. Headquartered in Atlanta, Georgia, it has operating revenues of some $23 billion and employs 32,500 individuals at electric utilities in four states and natural gas distribution utilities in seven states.

Originating from a holding company founded by engineer and builder James Mitchell a century ago, it began life as an electricity company before becoming one of the largest gas providers following a merger with AGL Resources in 2016.

Like all energy companies, Southern is acutely aware of the need to innovate to find answers for some of the sector’s most pressing issues, such as delivering better, more reliable and more efficient energy, as well as finding solutions in areas such as electric battery storage and electric car technology. As Michael Britt, vice president Energy Innovation Centre at Southern Company says: “The monopoly utility provider is not long for the world, so what role will we play in the energy value chain and how should we position our company to not just survive but thrive in that future?”

The company knew it was sitting on a precious resource that could help with answering these questions: its employees. The challenge was how to tap into these employees’ talents.

What Southern Company did

In 2014 Southern launched SO Prize, an internal competition for system employees that aimed to harness the power of innovation and collaboration. The goal was to help the company "look around the corners of the future" and position itself for continued success. The competition would recognise employees who devised the most inventive solutions to allow the company to continue to successfully serve customers in the future, and to stimulate fresh ideas that could potentially drive future growth for years to come.

The idea took hold within the company and teams made up of employees from different operating companies and subsidiaries, collaborating across geographic and business unit lines, submitted some 1,000 ideas between them. Six winning ideas were chosen, ranging from an alternative to hydrogen to using data to identify customer priorities and actively provide individualised solutions to customers, and in 2015 the Energy Innovation Centre was opened to provide tools to help employees bring their ideas to life. This includes a crowdsourcing ideation platform that has since been used to support multiple system-wide, company-specific or area- focused online ideation challenges.

One challenge launched by the EIC was the ‘One-Day Challenge’, a monthly session designed to engage employees across 11 states. These challenges enable employees to virtually collaborate and ideas are assigned to different business units for evaluation.
One of the keys to the success of this approach has been top level buy-in, explains Britt. “There was a lot of communication from our CEO. He was briefing the board on a regular basis and the winners got to share their vision with the board of directors.  Many of these folks might never get in front of that kind of audience so it's really a terrific opportunity,” he says. 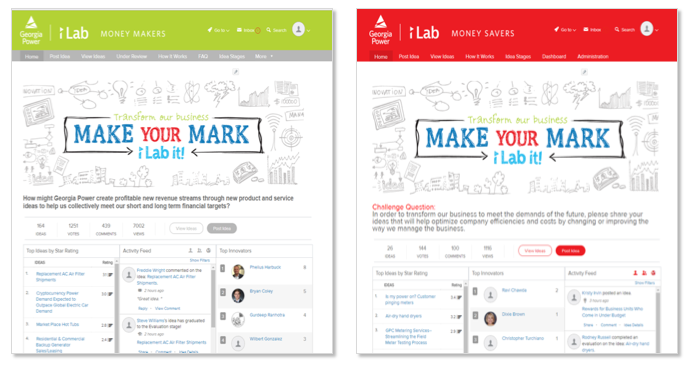 Another powerful lesson has been in the framing of the challenge. Using methodologies such as design thinking, Southern Company worked closely with its operating companies and partners to create the challenges.

“One of the interesting things we found is that the human brain is set up to solve problems with constraint. So, if you throw out an open-ended question such as 'how do we save money?', 'how do we make money?', it's too broad, the brain can't process it. Then you get poorly thought-through ideas.

“But if you provide constraints, such as how do we grow with minimal capital investment and help people in rural areas of our service territory, that then creates the ability for the brain to tackle the problem in a new way and to begin to think creatively,” Britt explains.

So, the lesson is to make sure your challenge question is good and that it is targeted with constraints. Southern Company patents some of the ideas and the originator’s name is on these patents. It also shares the revenue going forward even if the employee has left the company. “It is fairly unusual for a North American company to share in the intellectual property with the employee,” says Britt.

One concern was employee engagement with the competition. “If you think about a power company, a very small number of people are actually in front of computers. Most people are in a power plant, in trucks or in the field making sure we deliver power reliably. So, we expected only about 10% of our employee base to engage,” admits Britt.

However, to date some 42% of employees have participated in challenges and more than 3,200 ideas have been generated, with hundreds moving into the pipeline for advancement and implementation.

Britt says the strategy has helped position the company as one with a culture of innovation and generating pride among employees.

“Employees see their ideas actually coming to fruition and that they don't just fall into a black hole. We respect every idea – that's been at the heart of this from day one. Every single idea receives a disposition from the innovations centre that we share with the employee so they can see on our dashboards how it performed in terms of voting and peer evaluations,” he explains.

One lesson he offers is to benchmark employee engagement before implementing an innovation approach like this. “As part of our engagement survey we have questions about innovation and employees’ perception of the company as an innovative company and that has definitely moved on the dial significantly, but we started it after we had done SO Prized and had quite a bit of engagement with the employee base, so I wish we had had the foresight to measure it beforehand.”

But Britt (pictured below) adds: “Through these challenges and ideation platforms we've been able to engage our employees in ways that we never would have anticipated.” And it is this engagement and recognition of the power of its employees as a problem-solving and creative resource that helped Southern Company to win the talent and analytics award at the Business Culture Awards 2019. 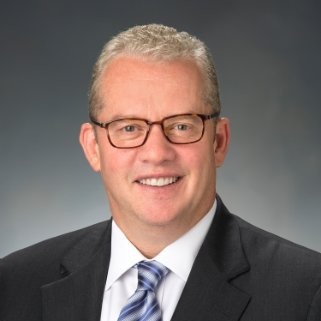 Register your interest for this year’s awards. Entries open 2 April 2019

Employees see their ideas actually coming to fruition and that they don't just fall into a black hole. We respect every idea – that's been at the heart of this from day one