Tale of a Twitter spat: does employee engagement add any meaningful value?

Employee engagement is in a big mess and evidence about its effect on performance is low. But not everyone agrees, finds Rob Briner 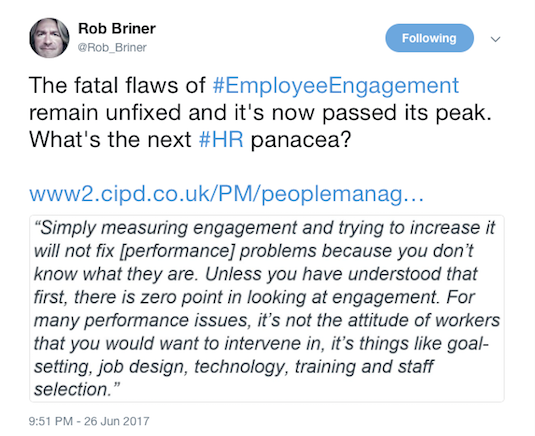 I usually quite enjoy a Twitter mini-spat. Not so much because arguing is entertaining – though it can be – but more because of what it can reveal about opinions, the ways they get formed and just how different they can be.

This particular spat started, as so many do, when doubts were raised about a deeply-cherished idea. The idea, in this case, was employee engagement. The doubts, raised by me, concerned its panacea-like status within HR and whether doing stuff around employee engagement added any meaningful value.

I’ve had serious doubts about employee engagement for a long time. Of course, I have nothing against the idea that how people think and feel affects how they behave at work. How could anyone, particularly a psychologist, be against that general idea?

These problems have been around for a long, long time and, as I pointed out in my Tweet, are largely ignored and remain unsolved. It’s almost as though employee engagement advocates just don’t care about this mess or are so confident in their own personal experience they don’t think the well-documented issues around definition, measurement or evidence are important or apply to them.

So what did I actually say? My Tweet linked to a recent People Management article which analysed the current state of employee engagement. I mentioned that its fatal flaws remained unfixed and wondered what the next HR panacea might be given that we do seem to be well beyond peak employee engagement.

I also included a quote from me reported in the article:

“Simply measuring engagement and trying to increase it will not fix those [performance] problems…For many performance issues, it’s not the attitude of workers that you would want to intervene in, it’s things like goal-setting, job design, technology, training and staff selection.”

I often get the chance to ask HR practitioners exactly why they are bothering to measure engagement. What actually is the pressing problem that will be fixed through doing engagement surveys and trying to increase engagement? So far, the answers I get are always vague but involve things like turnover, commitment and performance, always performance.

So what are next obvious questions to ask? What is the specific performance issue that will be fixed by enhancing engagement? How do you know low engagement is the cause? Will increasing engagement fix it better than doing something else that’s quicker and cheaper? Here, too, the answers are always vague.

The Tweet got a few likes (even a hastily removed one from Gallup), a couple of Retweets and a couple of interesting responses. One was from Jane Sunley from Purple Cubed, a consultancy that sells employee engagement stuff. She said employee engagement was misunderstood, that it isn't an HR initiative but part of the organisation’s DNA. Well perhaps. She insisted there are great metrics and simple, yet robust, measures. Possibly – but where are they? I’ve looked pretty hard and seen lots of evidence but none that shows robust measures.

Another response was from Eugenio Pirri, chief people and culture officer at Dorchester Collection, who does employee engagement stuff.

He agreed a little but also said that on the ground it is possible for organisations to analyse their own data to examine links between engagement and performance and then to adjust and adapt and keep improving. 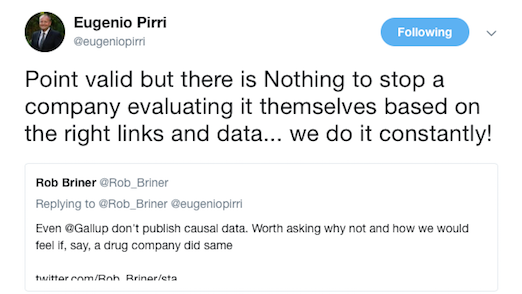 Quite possibly he’s right. But again, such claims are really hard to verify. In my limited experience, very few even large companies appear to have the expertise or energy to analyse the data they’ve got to see what, if any, causal links there are between increases in engagement and increases in performance and, crucially, if they are worth having.

A lot of debates about evidence-based practice in HR, and elsewhere, are really not about the evidence as such but rather about things like vested interests and sunk costs. If my business depended on persuading clients to buy the employee engagement products I’d made it would be really hard for me to accept criticisms of the idea. Likewise, if I’d put a chunk of my company’s HR budget into employee engagement activities and sold it to the senior team as something important it would be pretty tricky for me to contemplate that it may all have been for nothing or not much.

There’s another reason I quite enjoy a Twitter mini-spat: it can lead to further debate, discussion and constructive argument. As a result of our interactions I’m delighted to report that both Jane and Eugenio kindly invited me to go and see what they do and to look at their data. Maybe it’ll turn out we don’t think that differently after all. But where’s the fun in that?

Rob Briner is professor of organizational psychology at Queen Mary University of London and a PS Contributor
Employee Engagement
Enjoyed this story?
Sign up for our newsletter here.
WANT TO GET FUTURE FIT FAST?
Sign up for our FREE newsletter!