Which remote or hybrid work model is best for diversity, equity and inclusion?

Employers across the world are beginning to mandate where and when they want their staff to work post the pandemic. But what could be the diversity, equity and inclusion impact of these emerging work models? The People Space looks at the four dominant models starting to surface, while Peter Howarth, joint managing director at our brand partner Armstrong Craven, gives his verdict on each 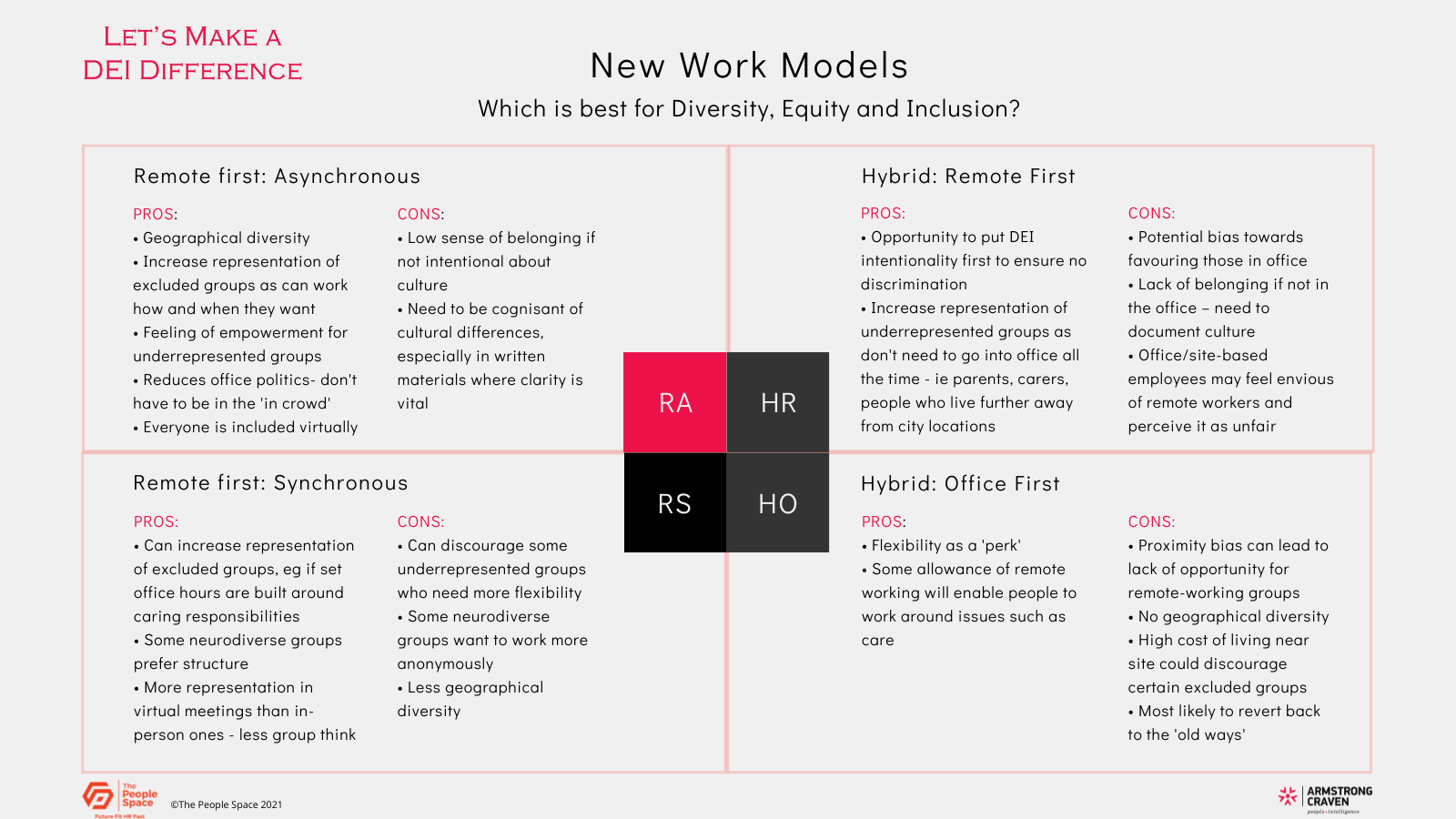 What is it? The organisation does not have a permanent office/location. Everyone works remotely but the work does not happen at the same time. Staff can work when and where they choose.

DEI impact: “It’s the most flexible work you can imagine,” says Paris Will, research officer in behavioural science at the London School of Economics. “And it brings geographical diversity because employers aren’t tied to location-based hiring. It has the potential to truly foster inclusion if staff aren’t having to deal with ‘signals’ that create bias.”

However she adds: “It comes at the cost of social cohesion. It could create a low sense of belonging and exclusionary factors could begin to creep in – for instance, those working at the same time as managers might get greater visibility/preferential treatment.”

But Chris Dyer, author of Remote Work: Redesign Processes, Practices and Strategies to Engage a Remote Workforce and founder of 3,000 employee strong PeopleG2 has been asynchronously remote since 2009. He says: “We actually have better DEI because we attract people who are able to work how they want to work, and office clique-ness is avoided. The chances of people clumping together are lessened.”

While some suggest this model hinders diversity of promotion, Dyer asserts it can be the reverse. “Being asynchronous means we just have to work harder at having conversations. We always start by asking who wants promotion [some, perfectly legitimately, say they want a temporary career plateau because they’re raising kids] and then try to assist.”

He adds: “To make sure promotions don’t become self-selecting, we ask people who traditionally may not have wanted leadership to see if they want to be a ‘part-time leader’. One woman who admitted she’d never have raised her head above the parapet is now on our senior executive team.” 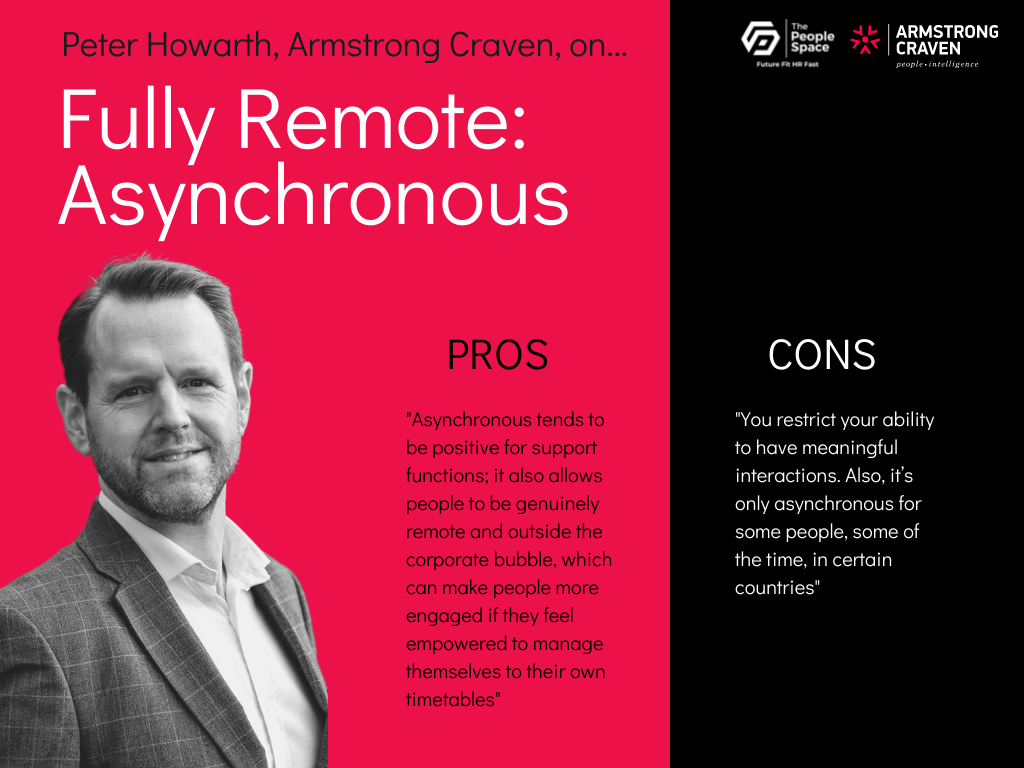 What is it? The organisation does not have a permanent office/location. Everyone works remotely but operates within core working hours.

DEI impact: Several firms – including PwC – are now opting for core hours but having staff remote. “Here colleagues can interact more; it’s much like being in the office,” says LSE’s Will. She adds: “Zoom can actually be a more equalising platform because it’s fairly clear when someone is dominating. Research points to the fact that this working model combined with virtual meetings platforms provokes more opinion, with all groups represented, and there being less of a chance for group-think.”

Says Dr Audrey Tang, chartered psychologist and author of Be a Great Manager – Now: “While neurodiversity is a broad spectrum – from autism, to ADHD and dyslexia – there is a general argument for saying that a core hours’ model offers structure to neurodiverse people.”

But she adds: “Dyslexics tend to want to help more anonymously, so Zoom-style meetings will not work. On the other hand, working remotely will relieve the pressure that some feel that they are being checked-up on. What’s critical, though, is that acknowledging that core hours mustn’t translate to greater oversight, as this can cause more anxiety for the neurodiverse.”

In the last few months, Dropbox has unveiled its own model, Virtual First, the default being working remotely but using face-to-face collaboration hubs as need dictates. It will also involve a core hours element – what it calls a ‘non-linear working day’ – of around four hours per day when everyone is online.

Laura Ryan, its director international human resources, says: “For the design of the model, the principle is to create a level playing field. We’re only three months in but we feel there is an opportunity for staff to be more included and we’ve gone into it with a learning mindset.” She adds: “We felt there is a DEI opportunity in this model to promote equity in all we do. We’re excited by it.” 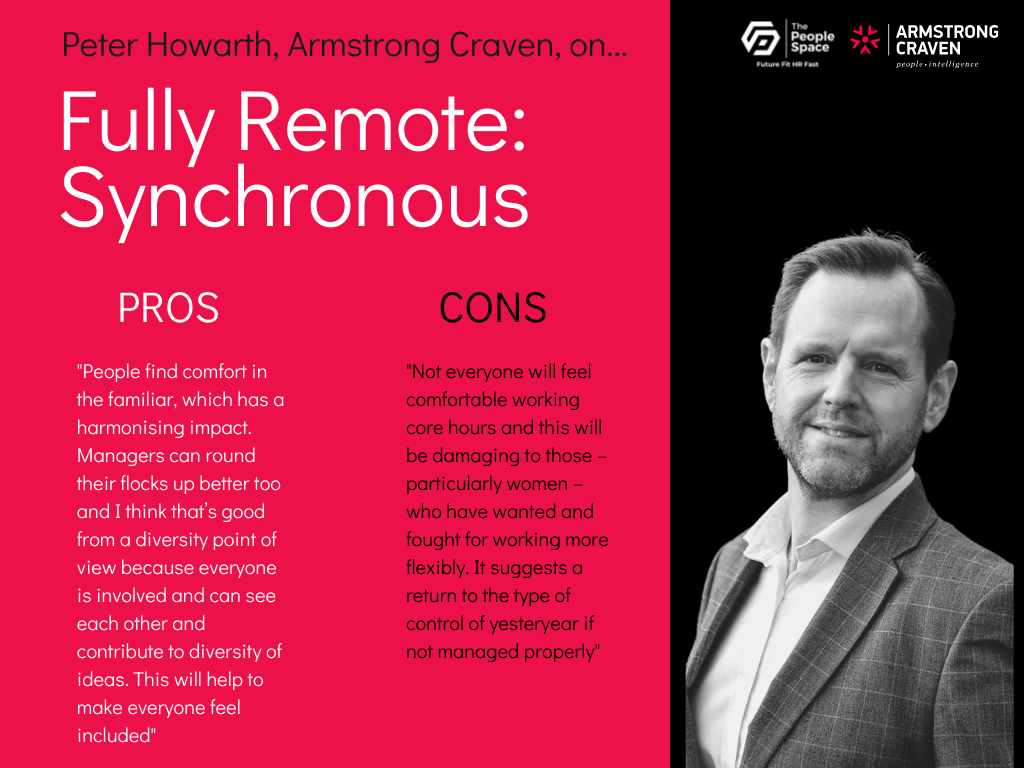 What is it? The organisation has an office/location. The majority or staff work remotely but some work in office/site as, for example, some come to the office periodically, for example for meetings or collaboration sessions.

DEI impact: Gallup-Certified Strengths Coach and founder of Achurch Consulting Rebecca Achurch has a more upbeat assessment of the remote-first hybrid model than some, arguing that if done correctly it has the potential to unlock diversity. “It’s a hard model, as people are neither in the office nor fully remote. But while most organisations design their working practices and hope DEI follows, this has the opportunity to put intentionality of DEI first by forcing managers to tighten up all the processes that could hinder it.”

She says: “It will necessitate protocols being set up to prevent biases creeping in and will force organisations to model what it is that they want – performance-wise and culturally – from their people.

“Introverts will finally be given a voice about how they want to work, while the office (when it is used) will become a transformed place – used more as a ‘venue’ and a place for what richness of talent can show.”

But others argue theory won’t match practice. “People will make quick decisions based on whom they trust and that will still tend to favour office-first staff,” says Lauren Romansky, managing vice-president at Gartner HR.

“The remote hybrid model depends on regular contact time to nip things in the bud but the bond people have in teams could be fractured by it,” adds Deepak Shukla, founder and HR director of marketing agency Pearl Lemon. “Right now, as a country, there is a huge belly of people uncomfortable dealing with things and this model could make things worse.”

Jason Fowler, VP, HR director UK & head of HR Northern & Western Europe at Fujitsu, agrees. “We’ve got to be really careful we don’t create a two-tier workforce, where we’re saying you can do your job at home, but you can’t have a career at home. At Fujitsu we’re not mandating either in the office or at home, rather we have a ‘work your way’ ethos.

“What we are doing, however, is starting to categorise roles into different ‘personas’ and outlining the expectations of these roles in terms of giving clarity on when people will need to congregate to a physical place. Alongside this we’re changing our performance measurement to include more regular check-ins with people so that there isn’t the risk of creating a negative DEI impact.”

He adds: “The last thing we want to do is replace physical presenteeism with digital presenteeism. We will look at the impact this model has. We want to be an enabler of purposeful work, and we hope people can integrate work with what they want to do with their lives.” 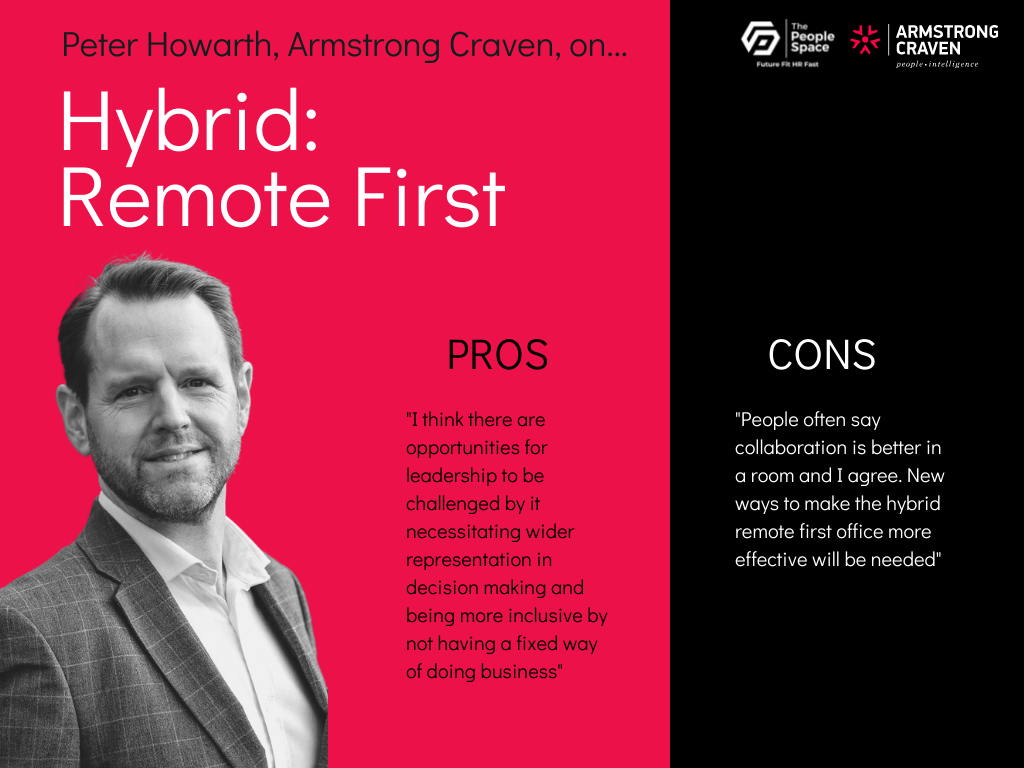 What is it? Most employees work in an office or on site – this is the norm. But some employees may be able to work remotely some of the time.

DEI impact: “This presents the biggest DEI risk,” argues Gartner’s Romansky, “because without seeing this new model as a complicated change project, power will simply concentrate around a particular type of representation – typically people that are able to be in the office more; those who are early career and don’t have childcare.”

According to PeopleG2’s Dyer this model has the greatest risk of reverting back to ‘old ways’ rather than creating a new blueprint for work because it recreates a preferred tier and reinforces one main demographic – those in the office compared to those not – with promotion and career development going to the former.

“This is managing by what you see and it’s fundamentally bad. Remote with great cultures can have a supercharging effect but all too often remote comes with a bad culture, which won’t work,” he says.

Adds LSE’s Will: “Although this model’s impact on informal networks [such as LBGTQ+ and women’s networks] is so far unclear – with the suggestion that being fully remote may help people come out of their shells and be a strengthening force – it’s still a fact that those in the office will be getting preferential treatment. Worse is that non-office workers may start to be singled out as a group not motivated as much as office employees.

“Because it’s always easier to communicate in person, ‘in-groups’ and ‘out-groups’ will form and the characteristics of the ‘in-group’ will begin to congregate around common characteristics, thus forming exclusionary groups.” 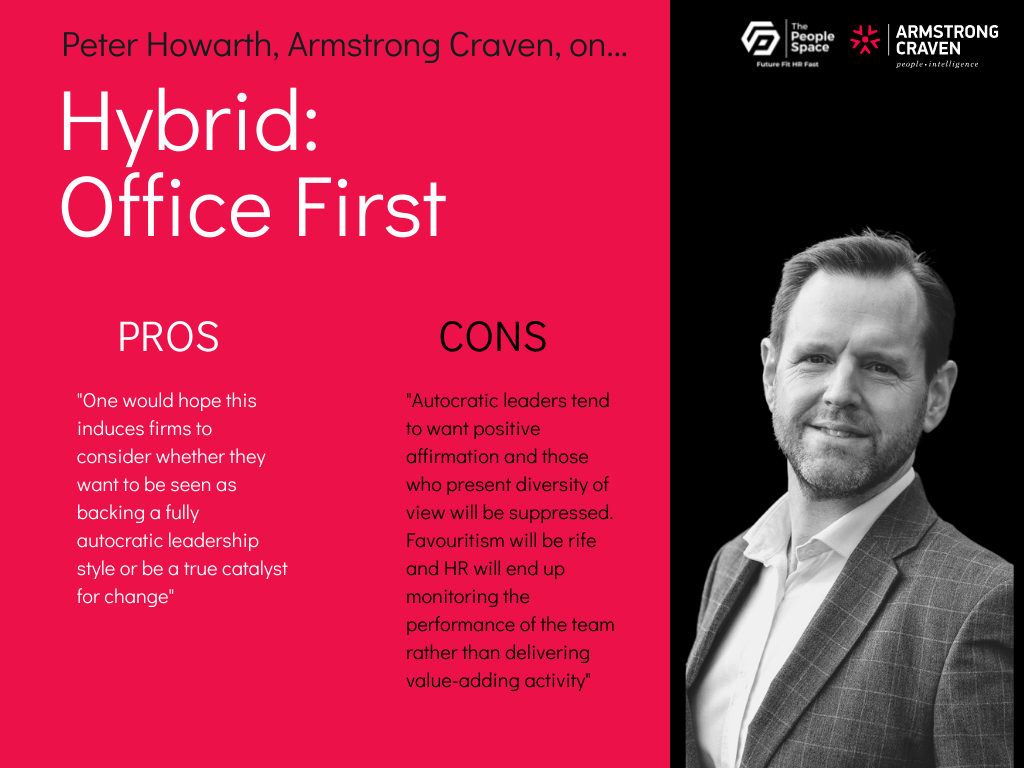 Published 14 July 2021
Future of HR
Diversity and inclusion
Recruitment
Enjoyed this story?
Sign up for our newsletter here.