“I need neither a holiday nor do I complain” - are robots the future of hospitality?

Two years ago in July Japanese travel and hospitality group HIS opened the world’s first robot-staffed hotel and it is now planning to export the concept. So will hospitality still need the human touch or are more robotic hotels on the way? 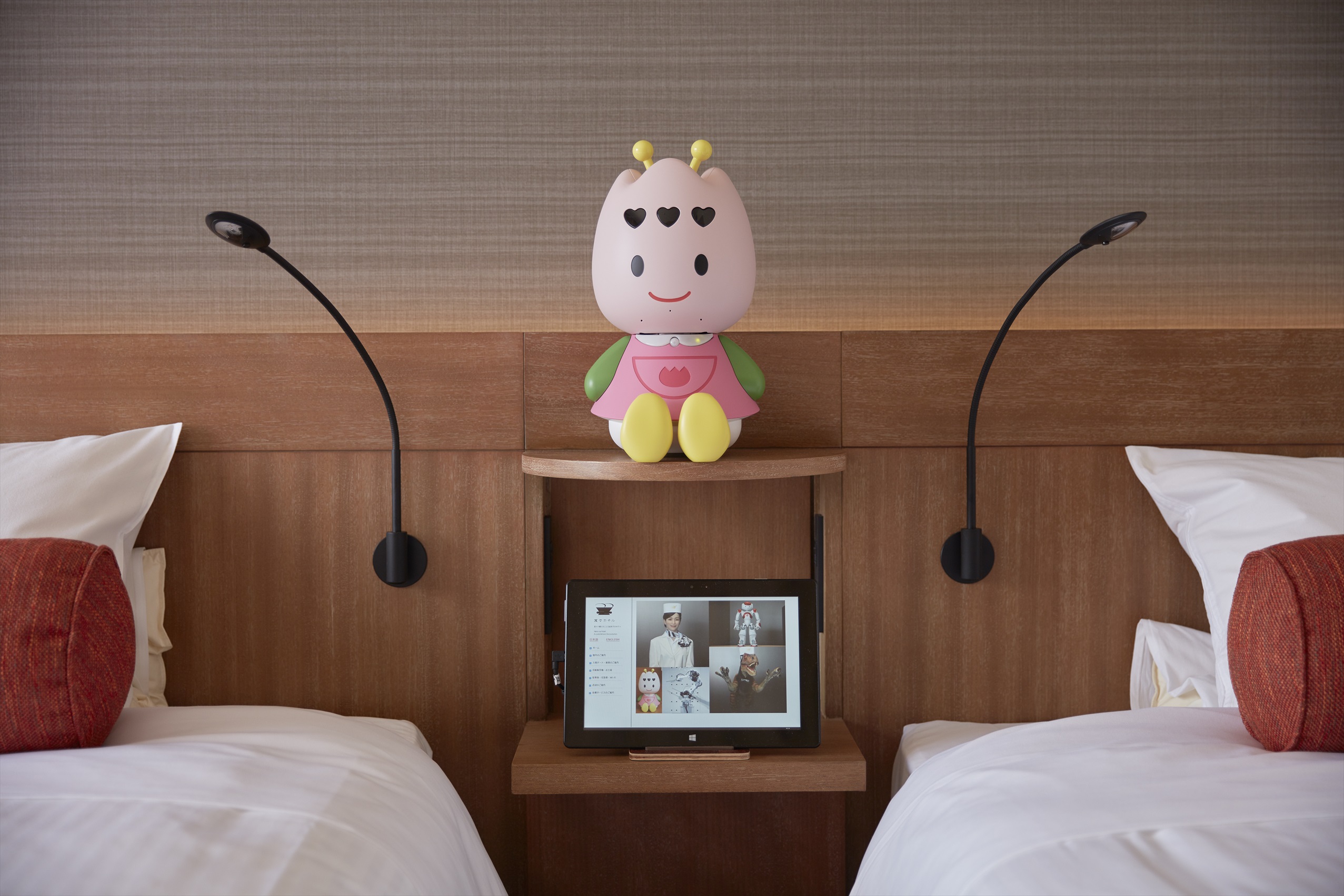 In July, it will be two years since the opening of what Guinness World Records officially calls the world’s ‘first robot-staffed hotel’.

The Henn-na Hotel in Sasebo, Nagasaki, certainly provides an unusual customer experience, what with its robot receptionists, robot baggage attender, robot porter, robotic in-room concierge and facial recognition to enter bedrooms, among other uses of automation and robotics.

Being greeted by a dinosaur in English may unnerve some people (a quick look at TripAdvisor shows customer reaction is mixed and there is still the need for the human touch at times, especially at check-in it appears) but then Henn-na Hotel is located at a theme park, the Dutch-style Huis Ten Bosch. And behind what some people may think of as a fad or mere entertainment – the use of both humanoid and non-human looking robots – is a serious business model focused around productivity and efficiency.

“Not only did we revive [the park] but we have also transformed it into a touristic city destination by launching the Henn-na Hotel – a promise of continuous change, focusing on energy and services provided by robots,” says Hideo Sawada, chairman of Huis Ten Bosch owner HIS Group, the Japanese-listed company that employs 14,380 people across the world in its travel agencies, hotels and theme parks.

“We also have developed the robotics industry on the site and plan to farm crops with the highest productivity in the world,” he adds, underlining that Japan is still one of the world’s leaders when it comes to finding efficiency gains in business through automation.

Since opening on 17 July 2015 the 5,530 sq m hotel has received 50,000 guests in its 144 rooms (a second phase opened in March 2016). It services these guests through ‘employing’ 180 robots and just seven people. Aside from the actroids there are robot window cleaners, robot lawnmowers and robot vacuums.

“We started at the time of opening with 30 people and have reduced that to seven people now,” says a company spokesman. “We have paid attention to the personnel expenses to improve productivity. Most of the business is carried out by robots but it isn’t 100%, so humans are supporting the robots.” 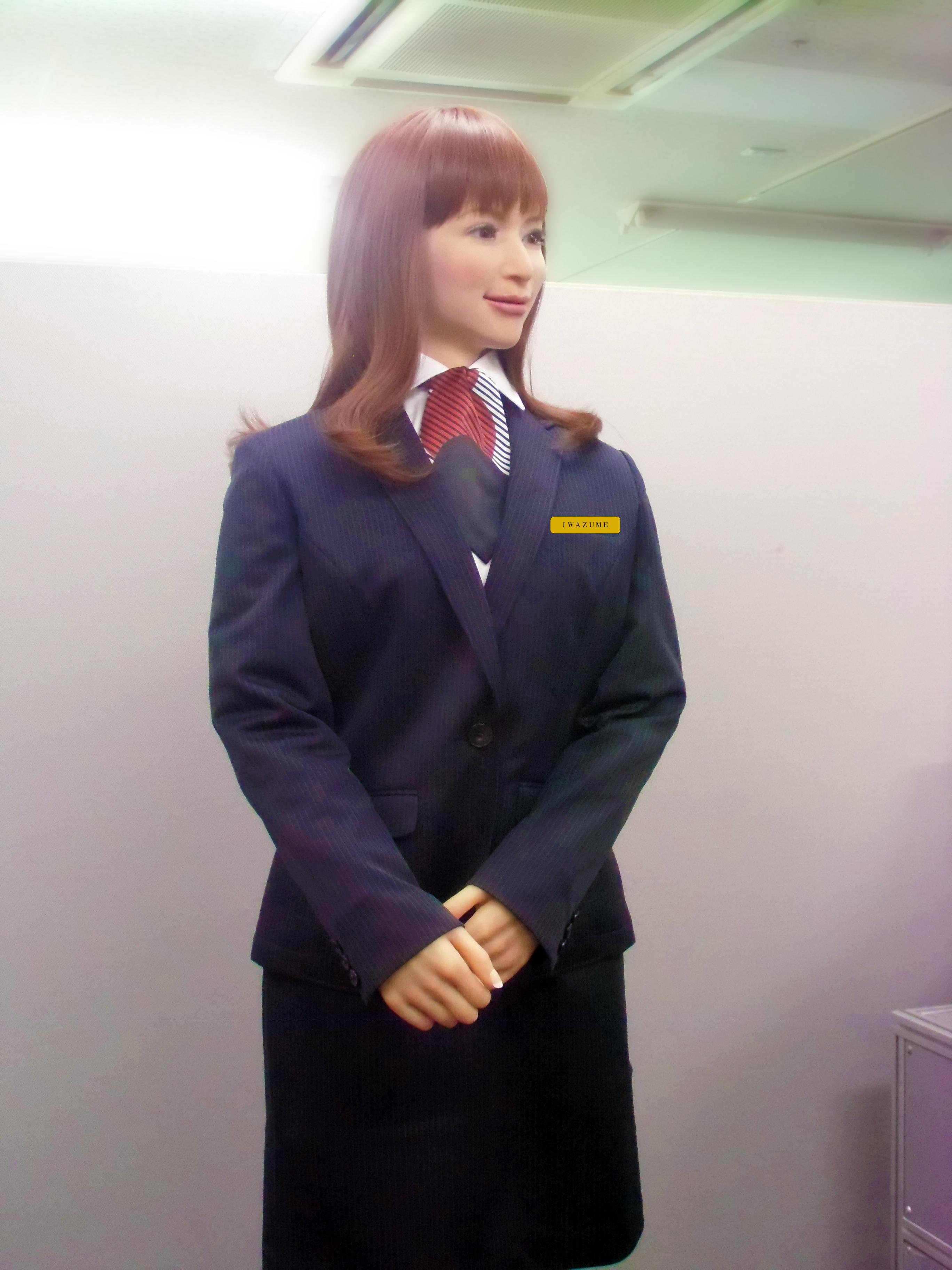 The human employees are on duty 24/7 so can assist in an emergency. The hotel contains CCTV cameras so that when guests have a question a human can intervene – either through instructing the robot or appearing and performing the task him or herself. Looking at TripAdvisor reviews, the time this has been most needed is at reception, especially for foreign travellers who are required to provide a passport.

This is a lesson the company has learned since opening. “The one big change has been in the front reception,” says the spokesman. “Japanese law requires guests to fill in a registration form. We have now introduced a tablet which takes the information from a website registration when the customer’s name is input. This saves wasteful time.

“Overseas customers also had to give us a passport, which a staff member dealt with. We have now mechanised this to enable check-in to be smoother.”

Other changes have been the introduction of more languages at check-in. At launch the robots only spoke Japanese or English but Chinese and Korean have since been added.

Hospitality is a sector in which many believe the human touch will still play the predominant role. At a recent Purple Cubed breakfast briefing Sean Wheeler, director of people development at Principal Hotels, said: “In hospitality you’ll still need people to look after people and engage them.”

But HIS believes robot-staffed hotels can bring benefits to the customer as well as to the operator.

“It enables the hotel to be low-priced so more customers are able to afford it. Henn-na Hotel is below half the price of the top hotel in Huis Ten Bosch. The idea is that service and price are kept low using smart technologies,” says the spokesman.

Feedback on the hotel experience from online reviews shows that certain robots are more easily accepted by customers than others. The facial recognition system is popular. This records an image of each guest’s face, allowing for keyless locking and unlocking of guest rooms (although for those who are uncomfortable with such technology key cards are available on request).

Tulip, the chirpy pink and green robot with three hearts on her forehead that sits on a bedside table, is also popular. She turns lighting on and off when asked by the customer (saving costs as often guests leave lights on in hotels), sets alarms and can tell customers the weather among other services.

Lack of queues is another benefit mentioned, with customers able to purchase food and room items such as towels from the vending machines rather than wait for room service.

Sawada believes automating services like these not only reduces costs for the business and customer but frees staff up from mundane tasks to concentrate on more creative ones. He is not the only one.

At Aloft Hotels, part of the world’s largest hotel company Marriott, customers at Dallas Love Field can receive extra towels, toiletries and other services from a robot butler, Botlr, who is contacted via a smartphone app.

We have ended up keeping these people but using them differently, using a different part of their strengths and talents

Meanwhile, at the prestigious Dorchester Collection, the emphasis is on artificial intelligence (AI). It has been working with AI for two years through the development of a tool to pull all feedback from review sites together. The tool can read 7,000 reviews in less than a minute and understands human traits like sarcasm and humour.

According to vice president of people and organisation development Eugenio Pirri: “It has helped us to focus. We have gone leaps and bounds in engagement scores as we are concentrating on what matters to customers. We employed people going through these reviews, taking days and days – in some cases we have now gone from four days to three minutes to get the same data.

“We have ended up keeping these people but using them differently, using a different part of their strengths and talents.”

Pirri confirms Dorchester Collection will not use customer-fronting robots, as they do not fit the brand. But HIS is so confident of its approach that it opened a second robot-staffed hotel, near Tokyo Disneyland in March, with new assistant Tapia replacing Tulip, and is opening a third in Aichi-ken this summer. Sawada has confirmed plans to open 100 hotels in the next five years, including overseas.

There is clearly still some way to go before robots can completely replace human employees in hospitality and before humans will accept their use. But consider how far artificial intelligence has come in the two years since Henn-na Hotel launched.

Also consider the value proposition: if costs are kept low and location, comfort, safety and assistance where needed are assured, why wouldn’t we see more such models in the future? It was not that long ago that customers had to speak to a person to order a pizza or to check in for a flight. It is now generally accepted that robots can play assistive functions, working with humans, in some people-focused sectors, such as hospitality, care and education.

Two years on, Henn-na Hotel may have its detractors and the experience is not for everyone. But, as with all business, it is about extracting the best value – for the business and the customer. Some customers will be happy with speed, low cost and a somewhat stark guest experience.

Employing robots, not people, is one approach to improving efficiency in a sector facing increasing global competition. To (mis)quote one of the big screen's best loved robots, Star War's C3PO, human-cyborg relations: "What could possibly have come over Master Luke? Is it something I did? He never expressed any unhappiness with my work. For I need neither a holiday, nor do I complain.”

It is now generally accepted that robots can play assistive functions, working with humans, in some people-focused sectors, such as hospitality, care and education