In May 2020 The People Space and 10Eighty held a week-long series of webinars to discover the practical steps HR directors were taking to deal with the COVID-19 pandemic. We catch up with David Frost, organisational development director at Total Produce, to discover the lessons since learned and which of the changes will now be permanent 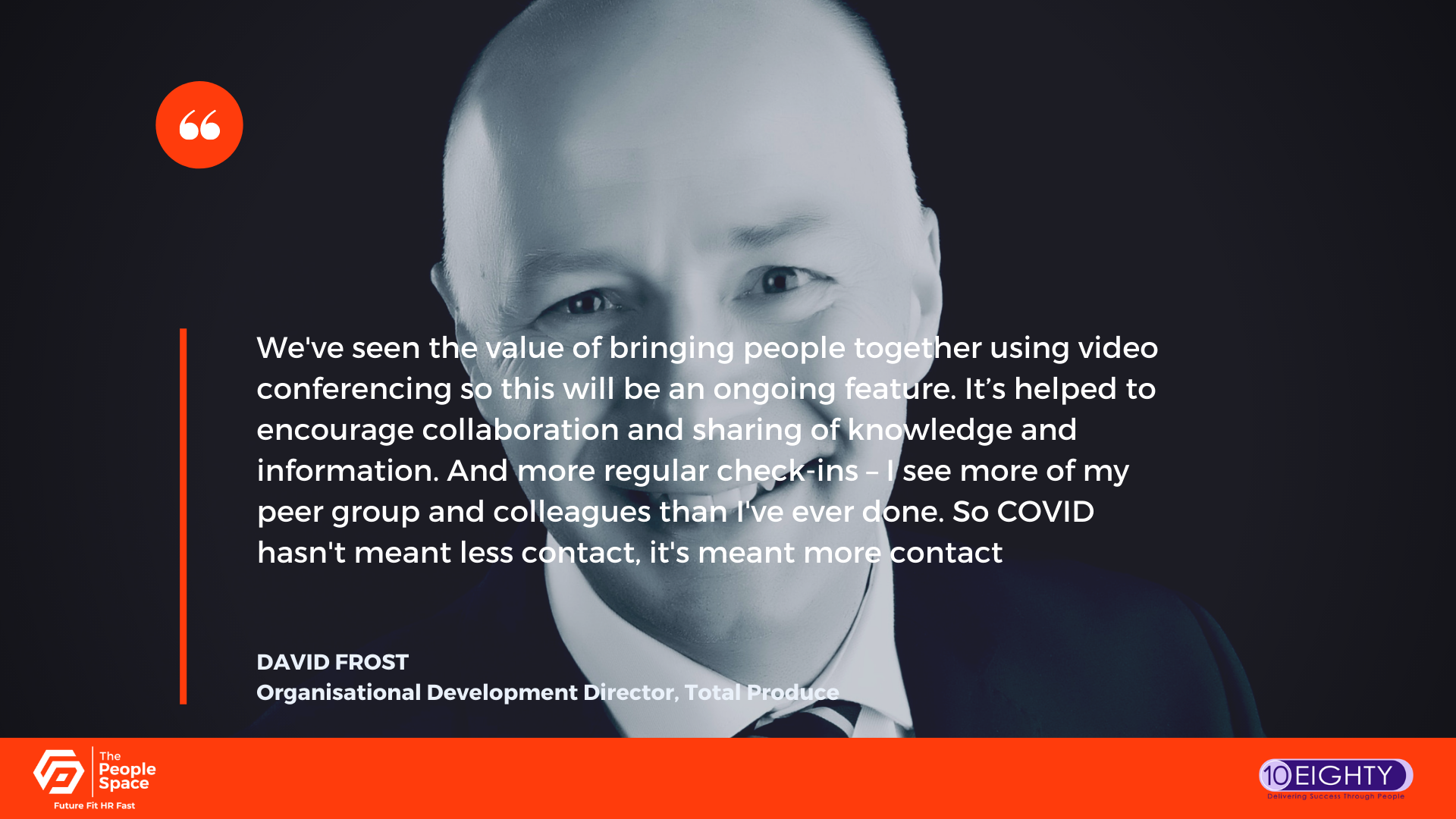 Because the nature of our business is supplying fresh food, we saw a big demand for the product. It spiked at the beginning of the first lockdown and then came down to more normal level, but that more normal level has continued. From a trading perspective, volumes have been pretty similar to what we might normally see. And that demonstrates that people are still eating roughly the same amount of food, they are just buying it more through supermarkets and home delivery. Our half year results came out in August and it was a robust set of results, though no one is by any means complacent or over celebrating because we recognise that lots of people are having a very tough time.

We expect to continue that pattern going forward but what none of us knows is as we eventually come out of furlough schemes and the economy has to stand on its own feet what will that look like in terms of the unemployment levels? We haven't seen the full impact of that, obviously.

Around 10% of our UK workforce of 1,500 people in the UK were food service related. We have now gone through the process of reorganising those areas of our business on a more permanent basis. and as a result of that, we have seen 150 redundancies. There’s no denying the need to have flexibility and agility. We’ve been very impressed with how people have just got on with it, frankly. We are a decentralised business model and people run their local patch and have taken measures that they felt appropriate for them. So for example, we've had a business in North America that's provided counselling support to people they felt would benefit from that, so there’s been a structured approach to doing that. We've had another business where the CEO has taken personal ownership of speaking to all of the employees on a regular basis.

New actions and approaches we will keep

Where there'll be some permanent changes we are doing more communication from the top, from the centre. So historically we wouldn't have done a great deal of communication at a group level. We were allowed to sit behind the scenes to some extent. It's very much about the businesses doing what they need to do, and we want people to feel affiliated to like their local business. But people have appreciated group level communication. The key messages are how the business is doing overall, so a bit of reassurance and acknowledgement and thanks to people for what they're doing. It demonstrates our CEO’s understanding of what's happening in different parts of the world and gives people a bit of a context. We see this now happening every three to four months tagged to key events, such as results or a Christmas message. It’s frequent enough so that it is meaningful rather than bland.

A core message is that safety is the most important thing. So things like, please do not travel unless it's absolutely essential and safe. We have a classic cascade process and my PA Caroline circulates across the whole of the UK. She's been mostly working from home but one day had to be in her office, which is on one of our operational sites. She sent out the communication and the general manager of the site sent an email within five minutes of receiving it to the CEO to say, Rory, I just want to say thank you. I really appreciate this. It means a lot. Five minutes later, Rory phoned him and they had a half hour chat. We use this site as a benchmark for safety practices and the CEO was able to say he was impressed with what they’d been doing. And then the GM came out of his office to Caroline and said the CEO knew about what they were doing here and it had made his month. I love that simple example, the power of community. That’s the impact. That reinforcement means this communication will stick. That guy's going to be telling his mates and it will spread around and all the employees will now know what we're doing here. Those little acts become legend. It’s the tiniest of things but has a big impact. So ongoing CEO group communication will stick.

We've seen the value of bringing people together using video conferencing to share what's happening, so this will be an ongoing feature. It’s helped to encourage collaboration and sharing of knowledge and information. And more regular check-ins – I see more of my peer group and colleagues than I've ever done. So this hasn't meant less contact, it's meant more contact.

Previously we thought we couldn't run a whole learning and development programme remotely. Our international key talent programme was centred around two big residential events. And this, our third, is probably better than the previous two, We've done more with the group than we normally would have done, because we made more of an effort to bring them together on a regular basis. We've had more speakers. We’re seeing no reduction in the impact of the programme. We know we can give really good outcomes without physically bringing people together, so there'll be less of that.

We’ve used the time during COVID to launch a modular based programme covering a whole range of leadership and management topics that we've offered to people around the world. They sit with a trainer in groups of around eight and people are just mopping it up. In terms of measuring its impact, we’ve got a methodology of using some scoring processes for people to self-assess. They have a quantity structured approach at the beginning to assess competencies and so on. At the start they have to sit with their line manager and do an initial review process to agree why they're going on these modules and then there'll be a review process again with the line manager.

Interestingly, we had planned this only for middle management but got asked if we could do a senior leadership version. I'm talking to some MDs, regional executives and very senior folks who've been in the business for a long time. That wouldn't have happened without COVID, I'm convinced, because there's this been a shift of mindset in terms of people recognising they need to keep their learning going, and that this is a great time to learn, because if they were working from home, they had more flexibility in their diary so can watch a webinar which they would have struggled to do in the office. Launching an online programme into a traditional company like ours in the past would probably have been very difficult, but now it's the only way you can do it. That’s going to be a our permanent feature of the business.

We’ve been spending the time over the last couple of months developing a more robust way of assessing how engagement is being managed across the organisation. As a result of what’s been highlighted through doing video conference calls with HR colleagues around the group and seeing how people are handling communication, safety management of COVID and so on, you start to get an insight in terms of how different businesses are approaching issues.

We’ve got some great practice. We've got some businesses that don't really fully understand engagement in the same way. So we've just drafted a policy document for the whole group around engagement and culture, which is a huge step forward. And we've launched a detailed survey questionnaire across all the businesses to capture key HR data and give us a much clearer picture in terms of where we've got a good practice or where we've got some concerns. The output will be used in future reports and to use those pockets of good practice as examples and also to identify where we need to drive improvement and facilitators to improvement. That would have happened anyway, but it's come to light as being particularly important at a time like this, so it's got the attention of the board in a significant way.