How to improve HR capability in DEI

Eight in 10 companies are just going through the motions when it comes to diversity, equity and inclusion. Is it any surprise when four in five HR professionals rate themselves as ‘beginners’ when it comes to DEI – the lowest of 20 capabilities studied. Peter Crush examines why the DEI dial is not moving and how HR can improve its capability in this priority area 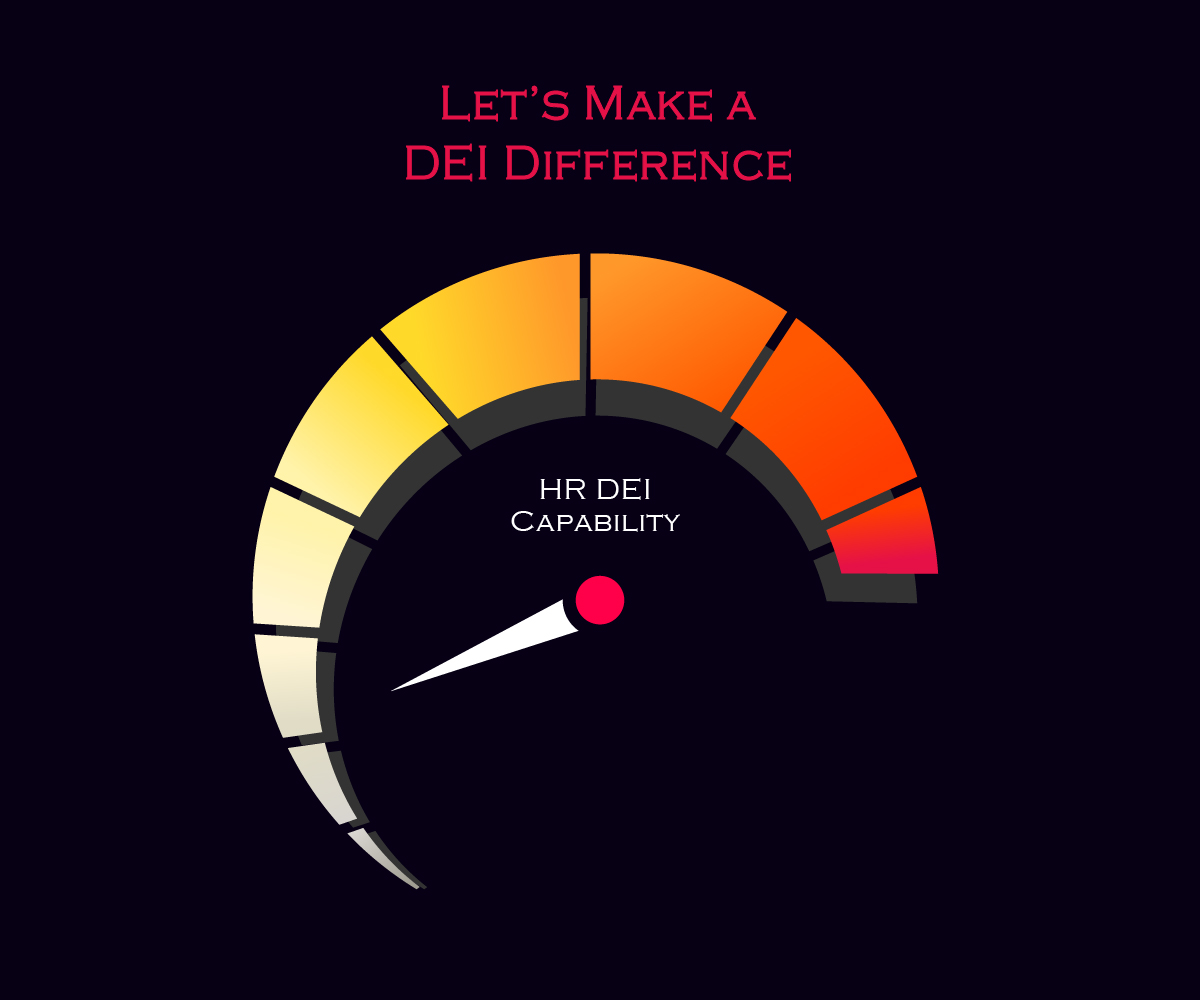 Sheryl Miller, c-suite coach and author of Smashing Stereotypes: How To Get Ahead When You’re The Only____In The Room describes herself as one of life’s great optimists. But get her talking about HR’s success (or lack of) in moving the diversity, equity and inclusion (DEI) needle, and the founder of the Stilettos Network (which champions a more gender equal society) quickly loses her calm.

“I’m not going to sugarcoat it. HR’s got a bit of a case to answer,” she opines. “It’s quite clear HR struggles with the right response about what to do about DEI. And that’s an issue with the profession. HR should be all over this. In any other corporate scandal you see other representative bodies take action, but all it has to do is call out a hiring decision and somehow it’s seen as being radical.”

Miller isn’t alone in decrying what appears to be very little action – at a time when the DEI agenda has never been so prescient. Some of the eye-rolling is familiar territory. “CEOs don’t suddenly wake up being evangelical; if they’re going to be at the DEI party they need strong HRDs to push back and challenge, and influence things getting done,” argues Rachel Davis, joint managing director at talent insight firm Armstrong Craven, pointing to the still prevalent view that HR directors need an active and listen-to seat at the table.

But with diversity and inclusion there is a sense that even bigger barriers are at play. “At a fundamental level there is the issue of what are the motivations for doing it,” argues professor David Collings, associate dean for research, Dublin City University. “For some it's merely a response to an event – such as Black Lives Matter, Pride or International Women’s Day – but that’s not DEI,” he says. “True DEI is a lens through which the whole company looks. When it’s truly ingrained it looks like something different.”

Adds Stephen Frost – who acted as a diversity and inclusion advisor to both the UK government and the White House and was head of diversity and inclusion for the Olympic and Paralympic Games – somewhere along the line DEI has morphed into simply a compliance issue too. “Here, you’re just box-ticking,” he says. “You’re doing something like gender pay reporting to fulfil a regulatory demand. But the problem with box ticking is that this is about achieving minimums not maximums and it fails to get embedded into organisational design,” he argues. And here’s something you don’t hear too often: his assertion that HR itself isn’t diverse. “It’s dominated by white women; so there’s no lived experience about what to focus on first.”

The evidence largely bears out these comments. Research by engagement consultancy Inpulse finds 33% of 11,000 employees it polled up to December 2020 said they did not feel their company took diversity and inclusion seriously. But most critical is Elevating Equity: The Real Story of Diversity and Inclusion by global industry analyst Josh Bersin. It makes for uncomfortable reading.

According to the research of 804 HR professionals fewer than 12% of companies compensate or track senior leaders for achievement of specific inclusion or diversity goals, while 76% of companies have no diversity or inclusion goals of any nature and 40% of firms see DEI as a risk mitigation and compliance issue. In addition, only 12% of companies hold managers responsible for recruiting diverse candidates and only 11% of recruiters are evaluated based on sourcing from underrepresented groups. 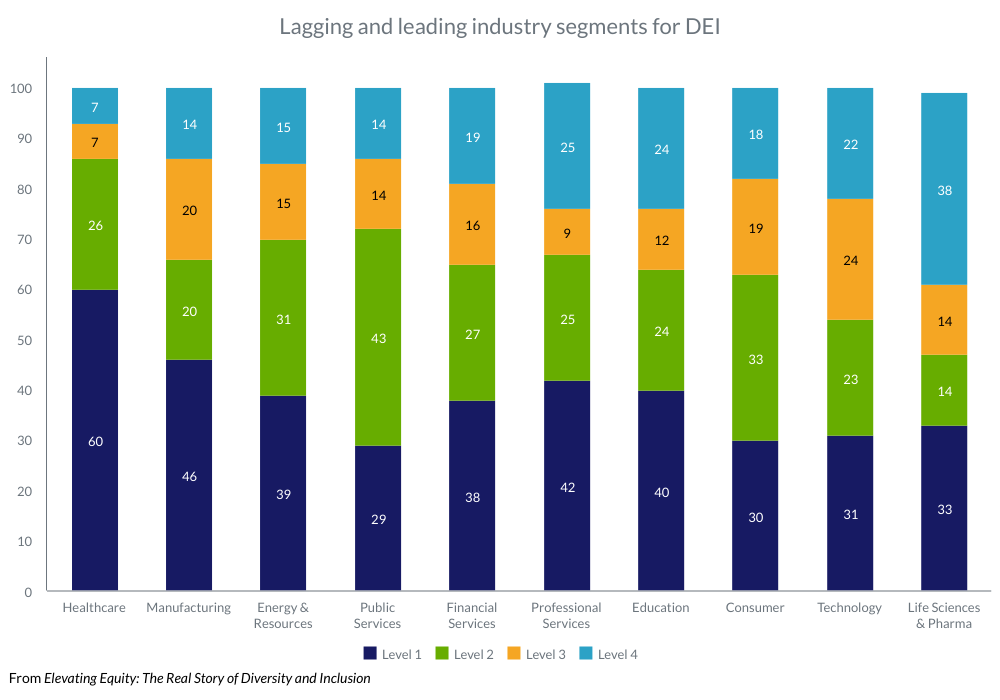 Bersin concludes that roughly 80% of companies are just going through the motions and not holding themselves accountable. But perhaps more shocking is another piece of research by Bersin of more than 3,500 HR professionals that finds 80% of HR professionals assess themselves as beginners in DEI, with a mere 3% claiming deep expertise in the area.

“HR thinks this stuff is simple, but actually DEI is quite hard, and then there’s the fact DEI is a business issue, not really an HR one as such, which is why hiring a chief diversity officer won’t work alone,” says Bersin.

“DEI isn’t a compliance issue or a purely HR issue but how you define your organisation. The whole business has to be wrapped up around being diverse. Your average HRD is not a DEI guru; is under-trained in it; hasn’t been brought up dealing with it and is uncomfortable with it. Not only is HR capability low but HR professionals also feel uncomfortable bringing it up.”

An example of this is found even in an area often considered the easiest to tackle first – gender equality. “The overarching sense I get is of an understanding of needing to do something, but HR isn’t quite sure what,” suggests Sheree Atcheson, former diversity, equity and inclusion leader at Monzo and author of upcoming book Demanding More.

Atcheson believes that even though compliance might be blamed for DEI being a box-ticking exercise, it at least sets the agenda because it gives HRDs data. “Without data there’s a lot of shirking of responsibility,” she says. “HRDs can’t be echo chambers. They can’t do anything without data. All firms as starting point do need to know who’s being promoted, appointed and why barriers to entry or promotion might exist.”

Adds Davis: “HRDs might well know that diversity needs to happen, and yet they don’t change things like entry qualifications – which mean applicants still come from the same talent pools.”

So what are the answers? According to Collings too much time is spent looking at the diversity part of DEI and not enough on the inclusion, and this is a distraction. “When companies focus on inclusion, they sense check everything that happens in areas that take top billing, such as gender and race, to the obvious exclusion of neurodiversity; identification; disability and other forms of diversity,” he says. 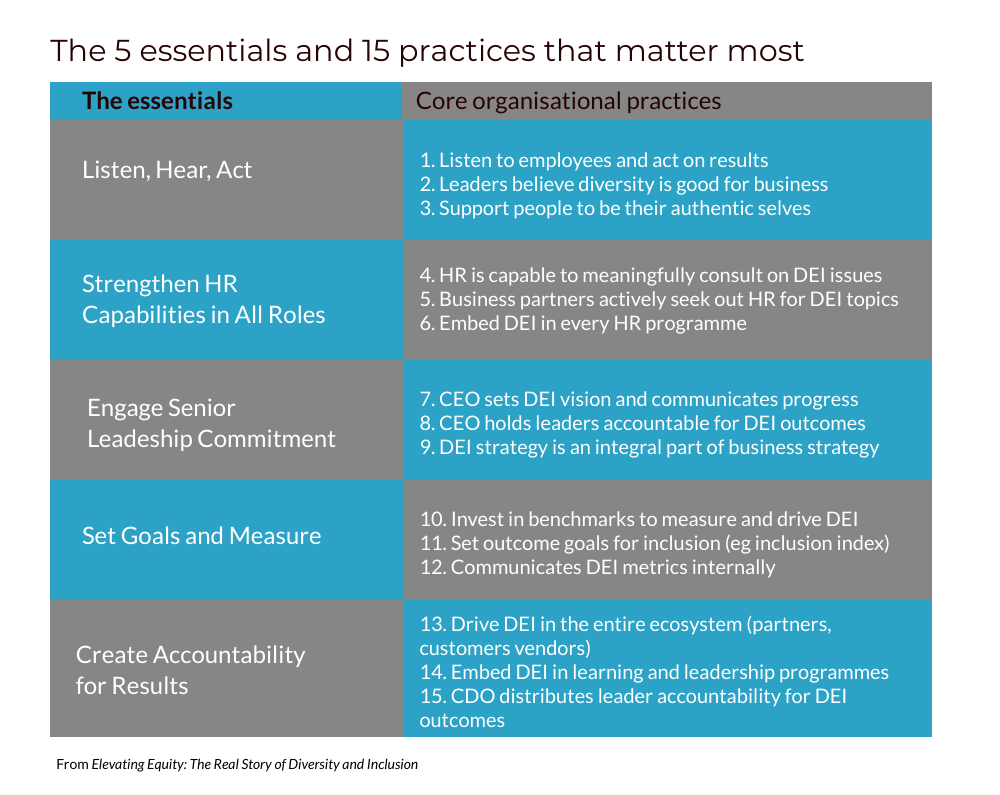 Bersin’s research finds five essential strategies and 15 ancillary practices that have the greatest impact on business and workforce outcomes. Interestingly most of these are not typical DEI practices but instead revolve around listening, HR capabilities, leadership commitment and accountability. What does not differentiate DEI business and workforce outcomes are the traditional activities and approaches HR has undertaken, such as mandatory training and programmes such as women in leadership, or whom the head of diversity reports to. 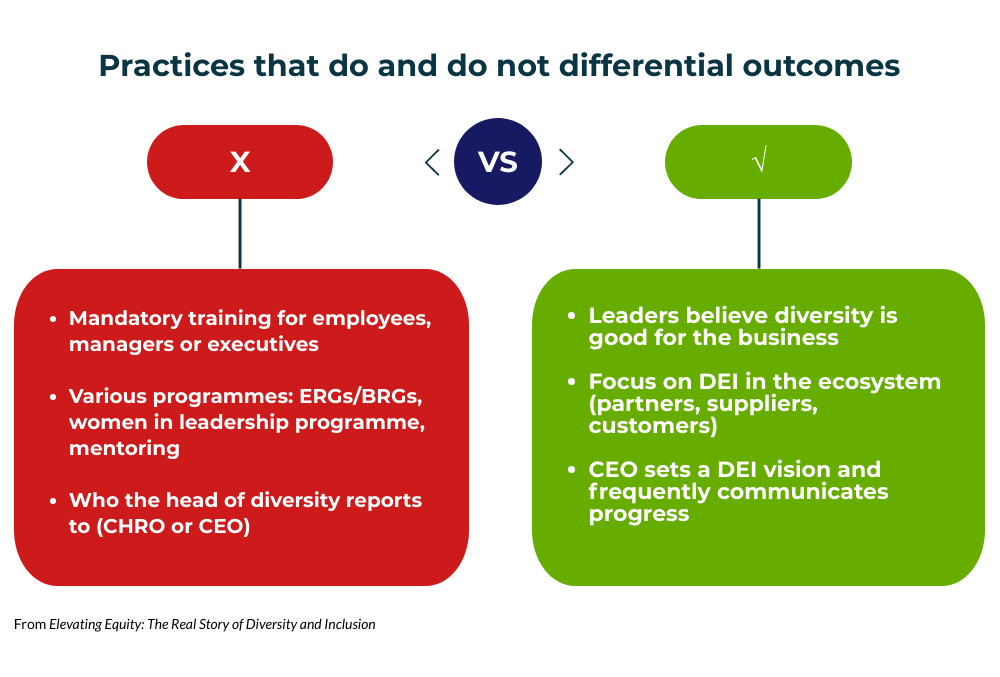 At advertising agency AMV BBDO chief diversity and HR officer Kelly Knight understands a much broader approach is required. “What’s lost in translation is that DEI is not gender or ethnicity or about BLM, because that would make it very reactive. We say ‘what are we doing to make people feel more comfortable at work’ – which is saying focus on inclusion, because that way we catch everyone,” she says. “As a profession we all need to stop thinking about how we could be offending certain people and start thinking about what works for all people.”

So while AMV BBDO does offer the full gamut of networks – a diversity committee, outreach to schools and colleges and the like - Knight also admits she can’t solve societal issues overnight – and that’s not what it’s about. “No-one wants to be hired to fill a quota,” she says. “But while I don’t believe in quotas (in fact 75% of the leadership team are women), it’s at least important to have targets to work towards. We want to reach goals set by our trade body.”

She adds that big DEI targets are unlikely to alter any time soon while her firm and others are on recruitment freezes, so it just has to keep plugging away in areas where the dial will move slowly.

“The point is you just need to start having conversations and be willing to tackle things,” she says. “The latest issue is that people don’t like the acronym BAME. But I say, how else are you going to know who is in your firm, to enable people to be the best versions of themselves. At the end of the day, you still need to have conversations that will actually get round to something specific.”

Bersin’s research also finds that high performing companies in DEI live by the culture, not just the metrics (a subject The People Space will be examining later as part of this series). Building society Nationwide is one organisation that views DEI as a cultural way of thinking rather than an initiative. Jane Hanson, its chief people officer, also looks after DEI and says: “In 2019 we reviewed our approach and decided upon an ‘inclusivity-first’ approach. We’ve been really careful about this so as not to create the wrong type of response,” she adds, “because it can still be quite a polarising topic. By linking inclusion to our mission and purpose, though – which is to reflect all in society – we think we’ve struck the right balance. We’ve set measures, but only to those reflective of wider society.”

Is this enough, though, or should bigger changes start to happen? “HRDs have to move DEI away from protected characteristics, which is about data. But it’s also an industry problem about changing the conversation about what DEI is,” says Miller.

Frost, who admits DEI took years to bed-in at LOCOG, adds: “The HR sector has to be full of people who know what they’re talking about in the area – to know what’s useless or not.”

Armstrong Craven’s Davis says HR can seize the DEI opportunity by heeding the evidence and holding a mirror up to the organisation.

“We can’t all tar HR with the same brush, but HR needs to imprint on CEOs what it is that diversity and inclusion means. While it’s a whole-business issue, HRDs still have to paint the picture. But they need to back it up with data. Anything that comes across as gut-feel simply won’t be listened to.”

Your average HRD is not a DEI guru; is under-trained in it; hasn’t been brought up dealing with it and is uncomfortable with it. Not only is HR capability low but HR professionals also feel uncomfortable bringing it up