Strategies to build a collaborative culture

Chris Williams, co-director of Oscar winning animated film Big Hero 6 says collaboration is the most crucial skill to his team. But, he acknowledges, it's not easy. Management thinker Erica Dhawan believes it all starts with simply learning how to get along. Here she offers four essential guidelines to doing so

As the first ‘mash up between Disney and Marvel Comics’, the animated movie Big Hero 6 required a combination of emotion and adventure. Its production was ‘uniquely challenging’, said codirector Chris Williams – requiring, for starters, the building of a supercomputer system that ultimately became the seventy-fifth largest in the world. Robust technology in place, the final cut boasts a level of detail unknown in animated film in 2015, including an urban setting, San Fransokyo, replete with 83,000 buildings and 260,000 trees. And, of course, there’s the film’s emotional core: a cuddly robot, Baymax, who walks like a penguin.

Big Hero 6 was awarded an Academy Award for best animated feature in 2015. Supercomputers aside, what did Williams consider most crucial to his team? Collaboration. But he acknowledges the challenges. ‘In some ways, [collaboration] fights human nature,’ he told an audience at the Academy of Motion Picture Arts and Sciences. ‘We all want to be told, all the time, that … every thought we have is gold. But if that’s all you ever get, the story’s not going to get any better.’

It’s one of the greatest challenges to any business; one I’m asked about most often. How to establish a collaborative environment? After all, as Williams says, it just might be that unexpected, outside input that shifts an idea from the everyday to the extraordinary.

While Big Hero 6 proves that there are exceptional rewards for those who master the art of sharing ideas, in reality it’s often necessary to start with the basics – simply learning how to get along. Indeed, this is the heart of collaboration and, without this skill set – which can be learned – achieving true teamwork across an organisation is complicated, if not impossible. Here are some essential guidelines to improving communication among employees and teams.

‘When I was working at Citigroup we used to say that the traders were “speaking their position”,’ says Leah Johnson, a communications strategist who spent years in companies like Citigroup and S&P. ‘For example, if you’re holding a lot of a certain financial instrument that you want to sell, you’re going to talk it up. That’s what teams or groups within organisations do.’ Understanding the other person’s position is the key to better communication. When working with another department, consider its end goal, the shared goal that drives tasks and motivations. It might not be the same one that drives you. In fact, it probably isn’t. ‘It’s not rocket science – traders want to do right by their clients. Public relations is looking for a good story to feed the media. Investor relations is looking to engage the analysts that interpret their business,’ says Johnson. These are three equally viable and equally necessary – if very different – motivators.

Here’s a big-screen example. In making Big Hero 6, the character development team spent weeks inspecting how each lead player would sit down at a table. Meanwhile, the special effects team looked for every opportunity to blow things up. The point? We can’t all be alike and we shouldn’t try.

It’s not only crucial to understand what people communicate but how they do it.

‘Different communication styles are often mandated by the nature of what you do,’ explains Johnson. After all, each team serves a specific set of people and follows a precise set of rules. These, says Johnson, ‘dictate their roles; what they feel they are safeguarding; what they feel they are advancing and what their priorities are. And that very often dictates how they can communicate internally.’

For example, IR (investor relations) tends to be proprietary about the intel it handles. And that’s really not surprising, when you consider the importance of keeping financial messaging on target – not to mention the rules and regulations that govern IR activities. Alternatively, PR executives seem to operate at consistently breakneck speed, needing everything now. They don’t do this for the fun of it, but because they are at the beck and call of journalists on deadline. Without understanding each team’s specific inspiration, these vastly different styles of communication can be alienating – a reason for employees to escape to their individual silos and create a sense of disengagement among colleagues.

Differing teams aren’t the same as opposing teams; save the battle between accounting and marketing for the summer softball league. Perhaps you think other departments move too slowly? Or too fast? Don’t expect others to operate by the same rules that govern your actions – even if your colleagues live in the same town and shop at the same grocery store.

‘When we are sitting in the same room, sharing geography, we tend to assume we share the same way of operating’ said Johnson. In fact, ‘the way you see the world is totally different from the way other people see the world. You have certain pressures, certain issues that others don’t have.’ Try to observe, not judge. And when you understand the other person’s issues, you’ll know better how to work with them.

Even when the other team is across the ocean and the physical distance is greater, the approach is the same – it’s merely another opportunity for understanding. Johnson describes a common challenge in her business experiences in Japan. ‘If I ask my Japanese colleagues to do something,’ she says, ‘they may not be willing at first blush to say no to me.’ It turns out that the Japanese believe turning down a request causes them to lose face and they will rarely say ‘no’. But they may not follow through. Understanding this, Johnson usually follows up with appropriate decision-makers after a request is made (especially when a request has been made in front of a group).

Change through determining culture and incentives

Knowledge is the foundation of change. To achieve effective transformation, you first need to understand the thoughts, ideas and biases that drive your team or business. Ultimately, this information will reveal the issues, attitudes and processes that need tweaking – and it can inform managers how best to manifest change.

When a company is experiencing divisiveness among teams, you can’t simply initiate ‘a lot of training sessions on talking to each other,’ says Johnson. The effort will come off like window dressing; employees will probably just zone out and chalk it up as another wasted hour ‘doing the values thing’. To forge better relationships, you first have to understand each team’s culture and know what drives its members. Next, ask (and be ready to answer) the crucial questions: ‘What’s the point of change?’ ‘What modifications do you want to make?’ ‘Why?’ And, importantly, ‘What’s in it for employees?’ Any less, says Johnson, is like ‘driving long distances without a GPS’.

Finally, understand the incentives to change – and discuss these incentives with employees. Some departments may be more difficult to convince than others. For example, why would the top money-making department feel the need to do anything differently? Understand team members’ thoughts and concerns. Be ready to address them from the start. And for those who simply refuse to budge? Perhaps share the wisdom of Benjamin Franklin, who once said, ‘When you’re finished changing, you’re finished.’

Erica Dhawan, pictured below, is founder and CEO of Cotential and was named the ‘Oprah of management ideas’ by Thinkers50. This extract is taken from Philosophy@Work: Reflections from the world’s leading business thinkers (published by Unbound) 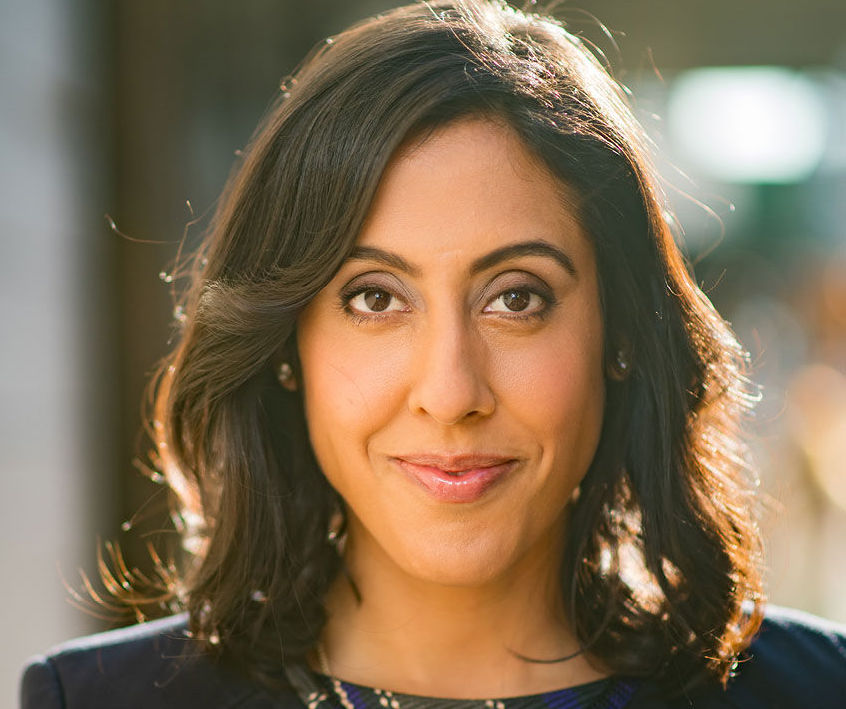 Published 14 September 2022
In some ways, [collaboration] fights human nature. We all want to be told, all the time, that … every thought we have is gold. But if that’s all you ever get, the story’s not going to get any better
Enjoyed this story?
Sign up for our newsletter here.
WANT TO GET FUTURE FIT FAST?
Sign up for our FREE newsletter!