Digital marketing agency Fountain is using an artificial intelligence-based wellness tool that analyses organisation communication data to flag potential wellbeing issues in teams before they happen. Co-founder and director Rebecca Lewis Smith tells The People Space’s editorial director Siân Harrington about the impact it has had and shares her lessons on how to get employee buy-in for predictive analytics technology 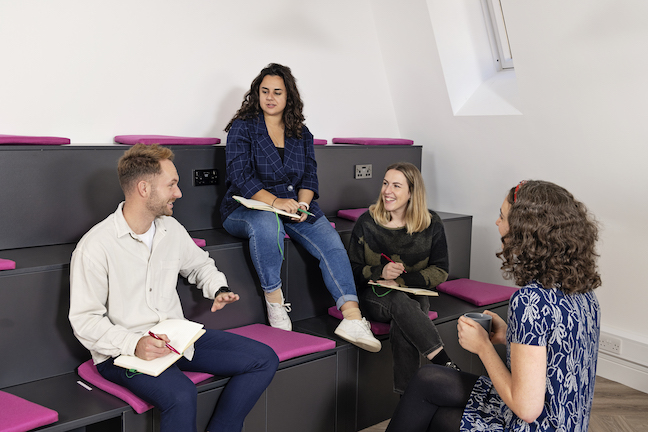 Fountain Partnership is a data-driven digital growth agency employing 49 people in the UK and in Calgary, North America. Headquartered in Norwich, it is 13 years old and works with a broad range of clients across fintech, train lines and e-commerce. In 2021 co-founder Rebecca Lewis Smith stepped down as managing director, giving the reins to a new leadership team, and moved her focus to culture and wellbeing. Being a data-driven organisation (and being a self-confessed data geek herself) she was keen to explore new data points that would help the company understand more about how all the different areas of the business were performing, including the wellbeing and engagement of employees. “We are trying very hard to make sure that everyone is looked after and that wellbeing is a focus alongside commercial outcomes,” she says. “You can't outperform a bad state. If you're in a really bad mood, you're never going to perform at your best at work.”

Lewis Smith wanted to build on Fountain’s culture as one in which employees can grow and support each other. It is important to the business that both its employees and clients feel loved – indeed, one of its values is ‘heart’. As Lewis Smith says: “You're never going to be able to make your clients feel loved and listened to if you’re not feeling valued and supported internally.”

The company had been using the GallupQ12 employee engagement survey since 2018, tracking culture and engagement on a quarterly basis. Each employee also had one-to-one coaching. Within coaching sessions the coach completes a form which includes a wellbeing score, with zero meaning someone is struggling badly and five meaning they are on top of the world.

These two pieces of data have been invaluable in measuring individual and organisational health, especially during the pandemic, at the start of which engagement scores “fell off the cliff,” and during which, thanks to homeworking, “you couldn’t see if someone's stressed; you didn't know what's going on outside this little box on the screen,” says Lewis Smith. But, while this data was useful, it was not enough, says Lewis Smith, because it didn’t give the wider context. The company wanted deeper insights in order to head off issues such as burnout or falling engagement before they became critical.

Fountain turned to one of its clients, AI-driven software company FACT360, to help it unearth these deeper insights about the health and wellbeing of its people. It piloted FACT360 Wellness, which uses AI and unsupervised machine learning technology to analyse millions of communications circulating within an organisation to predict behaviour based on historical norms.

FACT360 Wellness looks at how employees communicate with each other through five key wellbeing factors: work-life balance, collaboration, sentiment, responsiveness and participation. The analysis operates at network level with insights displayed by organisation, department and team. Results are not linked to named individuals and the FACT360 wellness algorithms do not read nor understand individual email, instant messages or any other type of conversational data.

At Fountain the focus is on responsiveness (how quickly employees respond to communications) and participation (who is communicating with whom and how often). As the company has a flexible working policy, with people working at times of the day that best suit them, the work-life balance measure is not appropriate – it looks at communication patterns outside set working hours. Lewis Smith says the organisation also felt the sentiment analysis might cross a line, so it decided against including that.

“Participation and responsiveness are incredibly good markers,” she says. “So often when people are very stressed their responsiveness goes down. So being able to see, for example, that the paid search team’s responsiveness across the board has started to dip means that it could be that they're not working well together, which we should get ahead of, or what we've ended up identifying is that there is too much work on for them and they're in that space of stress where they're not saying ‘Hey, we have too much on’. So it gets ahead of that. Equally being able to see where there are people within the business or groups of people who are forming little silos of communication is useful.”

With 90% of the company’s internal communication taking place on Slack, the tool concentrates on picking up anomalies in this communication flow.

“We spoke to FACT360 about the fact that we didn’t want to analyse the content of Slack messages and that we wanted it done on a team basis, not individual,” explains Lewis Smith. “We have a very high trust organisation. We have a lot of autonomy and a lot of ownership. We didn't want our team members to feel like we were looking over their shoulder and that they were feeling spied on. It was important we didn’t do anything that would make people question whether we were seeing the messages they’re sending when they let off steam.“

To get buy-in from employees Lewis Smith surveyed the team to see what they felt about the introduction of such software. Communication was explicit about what the technology would be doing and how it worked. According to Lewis Smith, just one person followed up to confirm the organisation would not be reading the text of messages.

With Fountain being a small business, one issue was that some teams comprised just one person. For example, says Lewis Smith: “We have a conversion rate optimisation team and then we have a developer who works closely with them. So I said, listen, we'll put you all together. And the developer said: ‘Hey, why don't you keep me separate because I'd be really interested to see who are the people that I'm working with the most?’

“Our approach with anyone where it was going to be a team of one, which means that we can really drill down to them, was that we just had that conversation with them and every single one of them said, ‘yeah, not a problem’. Enjoying data is a big part of working at Fountain and I have a sneaking suspicion that had I said we're going to be able to see everyone, people would have been like, oh, can I see my own results?”

The tool allows an organisation to export historical data into it as well. So when Fountain went live with it, it was able to look at the months before the pandemic and the start of the pandemic and then everything onwards. Its people and culture team have access to the results through a dashboard and report weekly on the data, flagging up any unusual behaviour. The tool uses interactive data visualisation software Microsoft BI, which the company also uses for data analysis for some of its clients so its people are well versed in it. 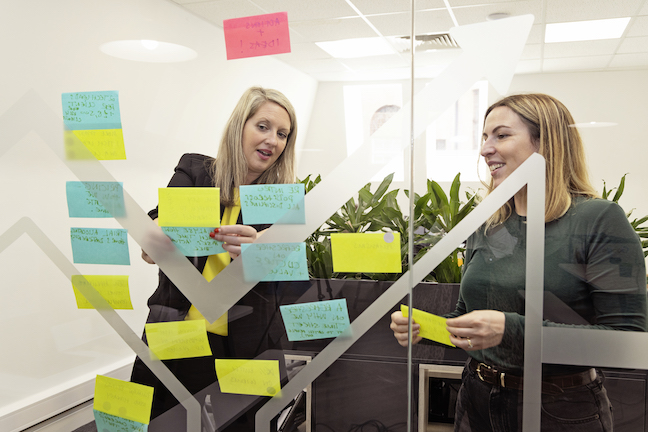 According to Lewis Smith, the tool has enabled the company to tackle a number of issues before they became critical. One important one has been to make sure leadership focus is distributed well across all departments. Another has been to spot when employees are becoming overloaded.

“Because we're an agency environment where we are billing out people's time we're constantly balancing our capacity and our time. And our project managers are very skilled at working at that. If we know that there's an issue, then we shift capacity. But, especially in remote working, there have been moments where we haven't had visibility on an issue, for example we lose visibility on how overloaded a team is.

“That's where responsiveness has been a key tool in saying a whole team is getting less responsive. It’s an indicator that something else is happening. And that could be that there's too much work on their plate or that there are other pressures on them meaning they’re not behaving in the way that the norms of the business generally go. And then we look into it and it's because they are overloaded. FACT360 Wellness alerted us to an issue that we were able to solve. Had we not got there we would have ended up with really stressed people. Instead, we were able to get ahead of it a week into the month, rather than at the end of the month and with some burnout along the way,” says Lewis Smith.

It has also helped the company unveil insights about people working remotely. Its Slack channel includes many social elements, such as a dog channel and recipe channel. Says Lewis Smith: “We can see interesting information about how people are connected with their colleagues, whether they're feeling at home and whether they've got that social side of things working out for them as well.”

The key is that the data is predictive, whereas Fountain’s other data sources are retrospective. Combining all the sources of data has proved the most insightful. “Our engagement score is looking one of the highest it's been since the pandemic started and we check out wellbeing scores weekly and for the last two weeks there hasn't been anyone three or below. And I put that down to the fact we're getting an earlier warning signal on wellbeing than those coaching conversations,” says Lewis Smith.

Trust has been key to introducing and embedding the tool, as has clarity about what it is being used for. “If, for example, we had treated responsiveness as a metric that you're going to give people as a goal – ie you have to be X responsive – that would have been damaging for our culture,” explains Lewis Smith. “whereas we're using it as a wellness red flag rather than ‘this person needs to be more responsive’. It's looking at where there's a change, where there's a moment. For example, where this team is not communicating well outside  itself and it’s getting more and more closed in. That's a trend. I think any business that tried to use it as a policing tool would find it challenging.”

“It is like a warning flag system. You can't always see what the issue is but you can see that something is brewing from the data. And what we're recognising is that if we match the FACT360 data with our wellbeing and our engagement scores you can see where issues arise ahead of the curve. So it's giving us a bit more insight to be able to get ahead of problems before they materialise.”

• Ensure you get buy in from the team and make sure that it's communicated with trust.

• Have a plan for its use, which is not about holding people to account using it but instead using it as a wellbeing tool.

• Give yourself time to play with it before you embed. Dive into the data. “It’s fascinating – like a study in human psychology,” says Lewis Smith.

Rebecca Lewis Smith, pictured below, is co-founder and director of Fountain Partnership 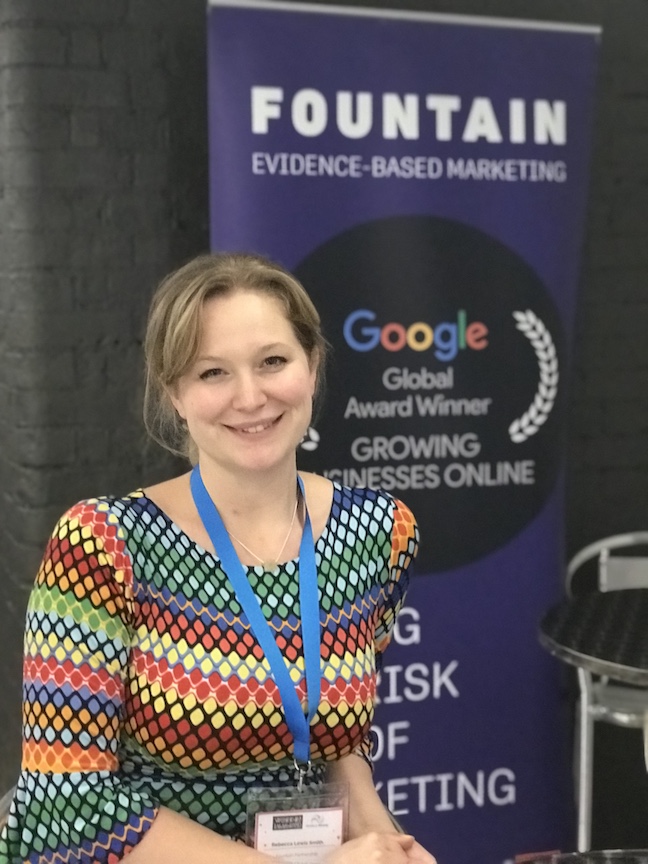