The six 'Influencing' tactics you need to master

There is no magic-dust, 'abracadabra' mantras nor potions of magic that could suddenly transform you overnight into an 'influencer'. But there are tactics to help

There is no known science behind that much sought after Midas touch. But certainly there exists an alchemy of effective practices that can create organisational gold. This alchemy is called 'influencing skills'. And there are several tried and tested tactics and collective didactics which one needs to practise to the levels of its mastery that could make you an effective influencer.

As you master these tactics, you need to first appreciate the under-story. Unless you as an influencer get the specific 'diagnosis' and the situational 'prognosis'  right, none of these tactics will give you the desired results. It's like medicine.... unless the doctor has a correct 'diagnosis' (he determines by close examination the nature and circumstances of the diseased condition) or gets his 'prognosis' right (he is able to forecast the probable course and outcome of the disease), he will end-up prescribing the wrong line of treatment. At times this could even be fatal. So too in relationships.

You therefore need to first understand the person you are trying to influence, his or her life purpose, characteristics, drivers, motivators, switch-ons and switch-offs and the actions that you as a leader or a peer are attempting to influence. 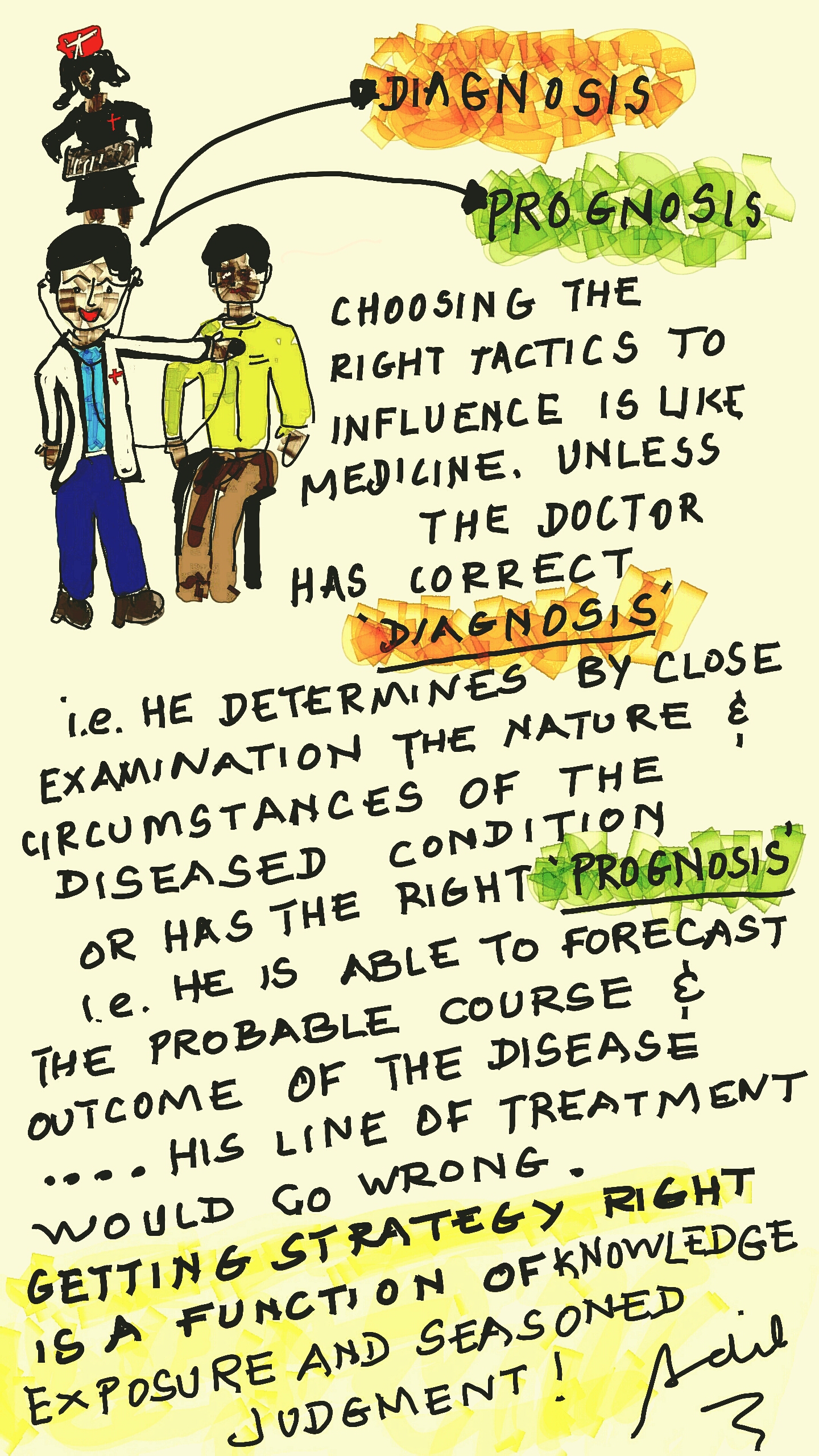 The six tactics of effective influencing

The best tactic to influence is to intellectually appeal to the 'influencee' (the person you wish to influence) with facts, data, knowledge and analytics, thereby appealing to his or her rational and logical thinking. If the issues that need to be influenced are objective and not emotional then there cannot be a better tactic than this. In fact, the appeal of this tactic can be further strengthened by adding positive emotional garnishing to the rational logic, wherever that is possible. Generally, this works like magic to influence positive behaviours and outcomes. Unless you get this logic right, you will never be able to break through the citadel of resistance.

While intellect can be influenced by logic and reasoning, if there is continued resistance from the person being influenced, 'intelligence' needs to be added to the influencer’s approach. This tactic involves collecting external market data, relevant experience sharing by others and exposure to the best practices. This strengthens the appeal of the rational logic through transferable lessons from relevant case studies and practices. Drawing from appropriate research data to back the reasoning of the influencer is a positive step.

Effective influencers have on several occasions broken through the stubborn resistance of influencees by directly studying their situations, adversities and deficiencies and thereafter recommending to them how the influencee could actually succeed in overcoming their specific problems by showing them proven remedies, therapies, options and solutions. This is like 'direct dialysis' of the influencee's system, assuming that by directly offering solutions to the problems and helping to cope with them, the chances of the influencer's logic and thus his or her acceptability would be enhanced. At times, direct confrontation with data and evidences works. But for that you should rather be extremely prepared and have huge control over your temper as initial inadvertent response to this strategy is denial and rejection, even in the face of overwhelming evidences. But if positively handled, this can be the turning point.

Deep knowledge of the influencee, his or her choices, preferences and lifestyle would help the influencer determine the currencies, domains and other relevant inducements that would appeal and make the influencee retract his or her stubborn stance. Offering membership to exclusive powerful clubs, exchanging insights into rare confidential research or knowledge, sharing of scarce resources and so on can be pressed into effect.

Occasionally, withdrawing the influencee's benefits, memberships and inducements directly by the influencer or through friends who may be within the powerful 'circle of influence' may work as an effective tactic to influence or pressurise the resisting peer or associate.

Tactic 5: Positive escalations through higher or other more powerful influencers/agencies

Here the influencer shifts levels and goes to the next higher level – internationalising or globalising an issue when localising fails. Tactics here would include raising the level higher to more powerful decision makers or bodies by getting them to understand your issue and thereby in return pressurising the person who needs to be influenced through them, their power or their sanctions for a cause. Offering to give up or withdrawing from an office or position so as to be able to pressurise objective listening is a part of this tactic. Mustering collective strength of similar others ( we call it 'interest aggregation' ) to influence the more powerful body or higher level agency to intervene also works.

When your earlier tactics to positively influence fail, there may be a need to play hardball and put more teeth into your earlier attempts to reach-out and influence action. There are situations of conspiracies and palace intrigues where dirty tricks may be played out to your detriment. Your positive efforts to influence and target 'win-win' may fail. Just because you don't attack the tiger, it would be foolish on your part to assume that the tiger won't attack you! It would be inappropriate to politicise this but it would be foolish not to recognise dirty games when they are being played out against you. When positive strategies fail, negative escalations with an overarching view to influence become critical, with the intention to create a more responsive environment. In such situations small skirmishes are bound to happen.

Some tactics to play hardball could be :

The idea behind all such tactics would be to positively influence and pressurise the stubborn or illogical stance of the influencee and make him or her move to the logical conclusion that the influencer hopes to originally arrive at.

Selectively, the right tactics have to be applied. What, however, is the 'right' influencing tactic? This continues to be a riddle and demands much from the insights, experience, maturity and seasoned judgment of the influencer. Right diagnosis and prognosis help but judgment is the best in choosing the correct influencing tactics to be adopted in difficult influencing times.

These influencing tactics when applied correctly can help individuals, groups, corporates, other organisations and even nations. Governors, managers or peers. Most admirable leaders influence action. Hidden in this ability to influence 'action' lies a leader's success.

So, master the didactics of influencing and you will be an ever sought after leader.