Leaders are misreading an impending talent shortage as a fleeting economic cycle rather than permanent structural change. And they believe technology will overtake people as their organisation’s most valuable asset
Sian Harrington
PS Editorial 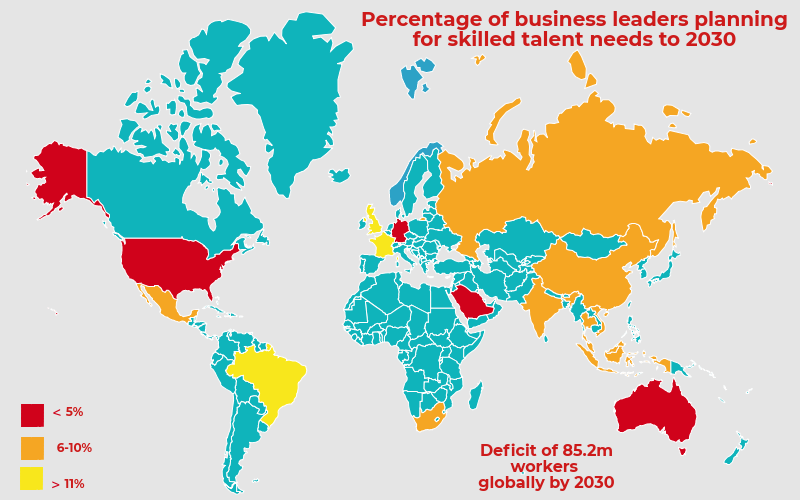 The lack of skilled workers to drive business strategy could be the defining issue of the age, threatening the profitability of organisations and the gross domestic product of nations, concludes a study by global organisational consulting firm Korn Ferry.

Significant shortages will hit companies and nations as soon as 2020 while the deficit could reach 85.2 million workers by 2030, says The Global Talent Crunch survey. Without interventions, firms could fail to generate $8,452 trillion by 2030 while the resulting increase in salaries for skilled workers could add $2,515 trillion to annual wage bills globally.

However, while business leaders generally recognise they will need to redeploy their existing talent if they are to be successful in the future, few are taking the necessary action. “If companies can’t buy the talent they need from the market, they must find alternative ways of filling critical roles,” says the report.

Leaders across the world have blinkered themselves to structural change, instead adopting a business as usual approach to recruitment, retention, engagement, advancement and the development of skilled workers

Despite the increasing talent shortages, 64% of leaders expect to increase their staff by more than 20% by 2025 to meet their growth plans. And 95% are confident their organisation can meet its future talent needs. Just 42% think the talent crunch will affect their organisation’s growth and profitability.

However, unless the supply of skilled workers increases, talent shortages will only grow more acute.

According to the study, leaders are taking a starry-eyed view of the future, especially in the UK where only 47% believe there will be a talent shortfall by 2020 and 32% predict a surplus of highly skilled workers by 2025, rising to 71% who think there will be a talent surplus by 2030. This compares with 79% of US business leaders who expect a talent shortage by 2020 and only 17% of global executives who predict a surplus by 2025.

Less than half of UK leaders (45%) also think that reskilling and redeploying their workforce will be critical to success, with 53% saying a talent deficit will not limit their growth or reduce profitability.

Chinese leaders are also overly optimistic, with only 35% believing a shortfall will exist in 2030. According to Korn Ferry’s research, China can expect a short-term labour surplus but deficits of highly skilled talent will start to take hold in 2030.

There is a dearth of long-term talent planning, says Korn Ferry. Some 84% of companies surveyed have a formal forecast and plan for skilled talent to deliver their strategy, but under one in 10 (9%) have plans extending to 2030. In the US, only 2% of companies have a plan for skilled talent up to 2030. In the UK, of the companies that rate people as the highest priority in their business strategy. 69% lack a formal forecast for their talent needs.

Part of the problem is the pace of change in business, with leaders struggling to visualise what their workplaces will look like in the future. But existing organisational obstacles are also in place: pressure for short-term shareholder return preventing them from investing time and resources into planning as well as high turnover in the c-suite stopping them from focusing on transformative issues.

Where is the talent coming from then?

Many leaders have misplaced confidence that they can find skilled workers in other countries, says Korn Ferry. The majority plan to expand in markets with a more plentiful supply of skilled labour. But this shows that executives have an almost universal blind spot about the chronic shortages worldwide.

“The talent shortfalls nations and companies are experiencing are not part of a short-term economic shift. They’re a structural change. Companies need workers with creativity, emotional intelligence, diplomacy and negotiation skills to navigate the new world of work,” says Alan Guarino, vice chairman, CEO and board services at Korn Ferry.

Contingent workforces are seen as the salvation by some, with increases here identified by 78% of leaders. However, as Korn Ferry points out, skilled talent shortages will affect all sectors and there is no guarantee that the right, flexible workforce supply with be available to meet needs.

Business leaders are prioritising technology over talent, with nearly three-quarters (74%) saying technology will overtake people as their biggest value creator by 2030. Half expect 20% of more of their organisation’s role to be obsolete by 2030. CEOs are particularly likely to think this way, with 46% believing that a third or more of their workforce will no longer be needed in just over a decade.

The US is more bullish about this, with half thinking technology will make people largely irrelevant while in China only a quarter feel this way. While technology will have an impact on job tasks, recent studies have shown jobs will be created and it is more likely that roles will change rather than become totally obsolete. Regardless, skilled talent will only become more valuable.

It’s about tech and people

In high growth companies, 91% of leaders say they will need more highly skilled workers as a percentage of their workforce, while in China, the US and Singapore 100% of high growth leaders believe this. They think technology’s growth will make companies value human skills more and view the technology/people partnership as key to future success. They are far more likely to think companies underestimate talent as an organisational risk.

CEOs talk the talk but don’t walk the walk

People are our greatest asset? Think again. Talent is rarely leaders’ top priority, says Korn Ferry. People was a top priority for just 13% of business leaders while the leadership team was the least frequent focus (11%).

Leaders across the world have blinkered themselves to structural change, instead adopting a business as usual approach to recruitment, retention, engagement, advancement and the development of skilled workers, says Korn Ferry. Organisations needs to develop a vision and employ models and scenarios to plan and prepare for ways the future may unfold. Otherwise they will stumble into the future without the time to make up lost ground.

Korn Ferry interviewed 1,550 business leaders in multimillion-dollar organizations about their views on talent shortages and strategies. Respondents included CEOs, COOs, heads of strategy, and other senior business decision-makers at C-suite level or C-suite minus one.

Published 7 November 2018
Skills
Ai in Work
AI in HR
Digital Workplace
Enjoyed this story?
Sign up for our newsletter here.