Three ways to reinvent managers for the hybrid workplace

We’ve reinvented work so many times yet we keep talking about the manager as a static role. As employers emerge from the pandemic with new work models, the role of the manager needs to be redefined, says Lynda Gratton, professor of management practice at London School of Business and founder of HSM
Sian Harrington
PS Editorial 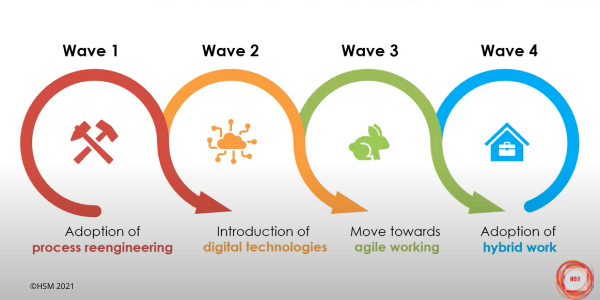 Remote first. Hybrid work. Back to office full time. Organisations across the world are grappling with the best staff deployment model to achieve their post pandemic business objectives. But whichever approach they take one thing is clear. The role of the manager will need to change as we move to the new reality of work.

What exactly that change will look like is a question Lynda Gratton, professor of management practice at London School of Business and founder of HSM, is exploring together with former IBM CHRO Diane Gherson.

“Managers have always been important and we need managers more than ever right now,” says Lynda Gratton, professor of management practice at London School of Business and founder of HSM. “Yet many managers are overwhelmed by the amount of work they have to do. What’s going to become of the role of managers as we move into new reality of hybrid working?” she asks.

Managers are now in a weird quandary of having to know and connect with their people, not perhaps managing their work and certainly not being involved in many of the administrative and communication activities they used to be involved in

If a recent HSM webinar is anything to go by, managers are struggling to cope after a year of dealing with pandemic changes. When asked how they would describe the everyday experience of being a manager today, it was striking how many negative sentiments were shared: “exhausting”, “harder than ever before”, “disconnected”, “juggling” and “stressful being” common themes.

Feeling overwhelmed and lacking time is nothing new. As Gratton points out, the work of the manager has been a difficult job since the 1940s and that unrelenting pace is mentioned regularly in research going back to that decade. Yet many activities have been put in place to remove some of the overwhelm in what Gratton calls the four waves of transformation (see picture above).

Gherson notes that the role of the manager has changed so much over time that some companies are now referring to the manager as ‘leader of people’ rather than ‘leader of work’.

“Even if we go back 10 years managers were managing budgets, they had a lot more authority than they do now because with process reengineering a lot of authority moved to a higher level in the organisation,” she says.

“Then along came agile and you start to see people moving fluidly in and out of the manager’s unit working on different projects, so the manager doesn’t even have that day to day responsibility for their people. Digital technology has taken a lot of communication and administrative responsibilities off the manager’s plate.

“So managers are now in a weird quandary of having to know and connect with their people, not perhaps managing their work and certainly not being involved in many of the administrative and communication activities they used to be involved in. It’s a different place but it hasn’t been re-organised into anything useful in terms of training and preparing people for the role.”

While each of these waves continues as the others build on them, managers are now facing the fourth wave – hybrid work – and this requires them to take on nebulous tasks they never have had to encounter before, says Gratton. She breaks this down into four areas:

1. Managing through an experiment
This is a journey. We don't yet know how to manage hybrid work. What Gratton and Gherson are seeing in the companies that they’re close to is an emphasis now on experimentation.

2. Issues of fairness and equity
How do you manage completely different types of workforce? Not everyone can work wherever and whenever they want in terms of place and time. And even if they can, there may be issues around fairness if managers take different approaches – for example if an organisation allows the manager to make the decision about who comes in and who works from home.

3. Extraordinarily complex scheduling
Expect digitalisation to play a major role here in scheduling people, office space and projects. As Gratton notes, much venture capitalist money is going into scheduling software, a sign it sees this as a key growth area in the future of work. But the manager will need to think about the principles behind the scheduling. You can’t have everyone wanting to come in on a Wednesday and Thursday, for example.

4. Information and knowledge sharing
This will be part of the everyday activity of the manager.

These are skills that not all managers are interested in, says Gherson. “Managing a remote workforce requires a level of commitment that managers didn’t have before. They could just pass someone in hallway and ask how they are doing. Now they have got to pick up the phone and have one-on-one discussions with people or one of their competitors will pick up that phone and that person will leave. Secondly, work is now done less through hierarchy and more through networks. ”

In other words, companies need to ask more of their managers in terms of connecting to and emotionally bonding with their people. This is a wake-up call, says Gherson, because the job market is hot in many areas. According to Gratton, some 40% of people are looking for new jobs at the moment.

The challenge, she says, is that managers are saying they are completely exhausted yet in organisations we are talking about a Nirvana where, in the hybrid world, managers are going to have the energy and skills to coach, facilitate, champion people, help with mental health, improve inclusion and so on.

Gratton calls these uncaptured actions that good managers do the ‘invisible thread’. This is the connective tissue between the team, allowing for team cohesion and growth. In the world of hybrid work, where there is less visibility and interaction with the team, managers struggle to maintain this 'invisible thread'.

“My worry is that when we get into hybrid we're not going to go to these sunny uphills but we actually get to a place which looks remarkably like the existing one, which is massive frustration and exhaustion. What are the practices and processes by which you actually allow managers to do the ‘invisible thread’?”

While Gratton’s research is continuing, she has formulated three ways to capture the ‘invisible thread’ and the changing role of the manager in hybrid work, based on ongoing discussions with organisations.

3. Focus on upskilling managers
Help managers create social capital by crafting management roles so that making time to learn is a criterion for progression. One of the reasons managers don’t do the invisible thread is that they can’t, says Gratton. “In some cases this is because they're not capable of doing it but in quite a lot of cases it's because they don't know how to do it.”

As we move to hybrid work we have got to start thinking more about the training of managers, Gratton concludes. Delivering the ‘invisible thread’ aspects of the role requires managers to understand social capital and networks. Here HR can play a role, helping them realise what social capital is, explaining the power of networks and measuring a manager’s social capital.

HR can also craft the job for learning. “I feel we haven’t thought enough about job design,” says Gratton. “We've tended to bring in practices and processes to reinforce behaviour, but what we haven't done enough of is to go back to the design of the job, how managers spend their time, their objectives and who they interact with. We can craft the role so people can learn more. As we move into hybrid work, upskilling and reskilling managers is going to be crucial to us.”