Skills, trust and technology: leadership in the Fourth Industrial Revolution

How can business leaders best serve the interests of all of their stakeholders while navigating a rapidly changing technological and political landscape? CEOs from four of the world’s largest companies offered their perspective at Davos
Sian Harrington
PS Editorial 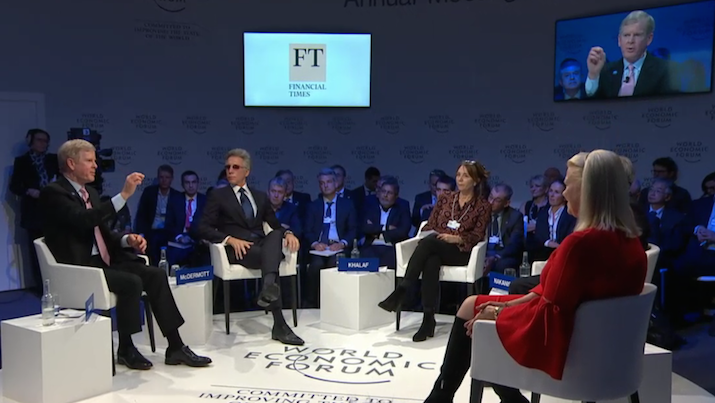 The Fourth Industrial Revolution is leading to a “trust headwind” and “skills crisis” as people feel disenfranchised and left behind, according to IBM CEO Ginni Rometty.

Business needs to change what it focuses on in this digital era, she says. “There is so much focus on the technology and not enough on the other side. It is incumbent on business to address the trust headwind around data and privacy, and skills.”

Rometty was speaking at a panel session on business leadership at the World Economic Forum’s annual event at Davos, where she was joined by SAP CEO Bill McDermott, Hitachi CEO Hiroaki Nakanishi and Procter & Gamble CEO David Taylor to discuss the impact of the Fourth Industrial Revolution on business and society. Here is what they feel about the biggest issues:

It’s like precision medicine, if it is not precise the doctor can kill the whole body rather than addressing the issue. My biggest fear is that the urge to regulate is so strong it could derail the entire digital economy

Skills: the rise of the ‘new collar’

“When I say skills crisis, I believe 100% of jobs will change,” says IBM’s Rometty. “ In the last 10 years two-thirds of jobs created in the US were digitally enabled. So, there is a major skills concern.

It’s the end of viewing jobs as white or blue collar. New collar means everyone can participate and business can no longer just look for people with a secondary or tertiary qualification. Business needs to invest in education, scale apprenticeships and find new models to give people pathways to get into new work. At IBM the latest cohort of apprentices includes a former FBI agent, a barista, nurse and fire officer.

“New collar is positive. We have to look at jobs and change the paradigm of hiring. Provide employment for a whole segment of population that feels disenfranchised. If we don’t bridge this skills issue, as it is moving so fast, we will have unrest,” says Rometty.

“We are going to any corner of the Earth we can to find the necessary talent to sustain our company,” he says.

“One example is autism at work . We are committed to hiring 1% workforce from people somewhere on the autistic spectrum. When you go somewhere that not everyone is, you get competitive advantage.”

“Equity is not about one big thing, it is the thousands of things you do over and over again,” said Rometty. “ From returnships to salary audits, and technology that continually checks bias to leaders being held accountable for equality, there are myriad things business can do to help advance equality and fairness.”

“Diversity is fact, inclusion is choice,” says McDermott. “It’s about culture, accountability, commitment, transparency and communication. For example, if you get young people in and promote them way too fast, they will surprise you on the upside every time.”

P&G’s Taylor is emphatic. “Diversity is an absolutely critical part of winning in the future.”

There is a huge inclusion problem with technology as it moving faster than people’s skills. The panel agreed this was the fundamental issue and that government could not solve it alone. Business has a “serious duty” here.

McDermott points to an SAP survey with the World Economic Forum that asked 10,000 people in 29 countries how they felt about technology. Was it going to make life better or not? The view was split.
“Technology is the baseline for winning. Businesses have to be intelligent businesses, they have to have a strong handle on the demand chain, play in an omnichannel world, and need brands that create literal fans – people who love that brand. Technology is the driving force of innovation and growth but not everyone knows this,” he says.

Data: there’s no such thing as a dumb platform anymore

The issue is not data but trust in data. Companies will succeed or fail on data. Of all the world’s data, big platforms only have access to 20%. The other 80% sits in other companies. “We need to be very clear how we differentiate between process and data,” believes Rometty. “It’s about how people in the company do their work, everything from design experience and speed to net promoter scores and tools. Companies need to declare what their principles are around data and be prepared to be audited. At IBM the data belongs to creator.”

The concern is that every government wants to do something about data now. If regulation is required, it needs to be precision regulation, the panel argues.

“It’s like precision medicine, if it is not precise the doctor can kill the whole body rather than addressing the issue. My biggest fear is that the urge to regulate is so strong and it could derail the entire digital economy,” says Rometty.

The panel agreed three areas of regulation were important for society and trust in business:

People trust their CEO and management team more than public officials, says McDermott. “It means business leaders have a covenant to keep in check. They need to partner with the public sector and be authentic and empathetic with our people.  Active CEOs and management are critical.”

People want to know how the enterprise contributes to society, says Nakanish. Business has to give a clear view of its activities. Consumers want transparency and choice, adds Taylor. When you have both and treat people with respect, you get trust.

Is the short-term focus on shareholders thwarting this? “Purpose is a three to five-year parameter. Are companies too tactical in the short term to protect this? Maybe less frequency than quarterly earnings would enable people to focus less on every bump in the road on the way to the finishing line,” says McDermott.

However, Nakanishi disagrees. “The reporting period not as important as how to share a common goal among all stakeholders.”

Rometty, meanwhile, believes this is a false argument. “If you set expectations and communicate them properly you can align to all stakeholders.”

CEOs have moved the focus purely from shareholders to a much broader group of stakeholders, agrees Taylor. “In the past, performance alone would build a brand. Now if the brand doesn’t have a point of view and behaviours are not consistent with the values a company espouses you have a real issue. Companies have to be clear what their purpose and values are. It’s a high bar and going up.”

Business: a force for good or sociopathic?

“I believe companies can be a force for good and growth,” says Taylor. “P&G touches five billion consumers a year. We can communicate important societal messages – creating an equity beyond share performance. We do take positions on important principle issues that conflict with values. We can lift society.”