The most underutilised weapon in the battle against gender inequality? Men!

Progress in gender equality has stalled. And while many books and programmes focus on how women can lean in, it is when men fully participate in combating gender-based disparities that change often occurs. So, ask Harvard Business School’s Colleen Ammerman and Boris Groysberg, why don’t we see more of it? 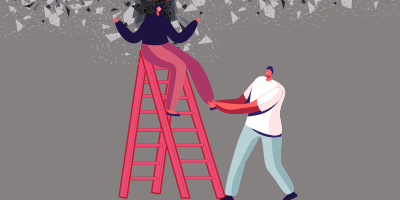 In 2019 JPMorgan Chase agreed to pay a $5 million settlement in a class action suit initiated by a male employee who was prevented from taking advantage of the bank’s 16-week leave for primary caregivers. The employee was told he could only qualify for the leave if he demonstrated that his wife couldn’t be the child’s primary caregiver. Meanwhile in 2020 a lawsuit filed by a former SoulCycle employee alleged that the company’s CEO chastised an executive about his upcoming leave, scoffing that “paternity leave is for pussies.”

These are not the only corporations to face legal action from men denied parental leave or who faced lack of support in doing so. And this, say Colleen Ammerman, director of the Harvard Business School Gender Initiative, and Boris Groysberg, professor of business administration in the Organizational Behavior unit at Harvard Business School, is a reminder that policies and cultures that treat men and women differently not only put a ceiling on women’s careers but also constrain men’s choices.

In their latest book, Glass Half Broken: Shattering the Barriers That Still Hold Women Back at Work, Ammerman and Groysberg focus on the pervasive organisational obstacles and managerial actions that are still creating gender imbalance some half a century since the corporate world started to wake up to the lack of female progress at work, and offer some strategies designed to overcome and mitigate these barriers at each step in the career path.

As Ammerman and Groysberg show through their book, companies have thrown millions of dollars at programmes to combat gender imbalance and there are countless articles advising women on how to alter behaviour to overcome the challenges. But there is one area that we have perhaps concentrated too little on – the role men themselves play in helping to enable female equality.

“At an individual level, men who are loath to work closely with women can of course have a damaging effect on the careers of their female colleagues. But men who are apathetic about gender equality also, without necessarily meaning to, stymie women’s advancement,” say the authors.

So why aren’t more men stepping up? For, when they do, they can have a game-changing impact. Scholars have found that men’s efforts to combat sexism or support gender inclusion are often seen as more legitimate and viewed more favourably than women’s are. One series of studies found that women who push for more gender balance in hiring and promotion are perceived as less competent, while their male peers who advocate for gender parity face no such perception. As Ammerman and Groysberg say: “Men’s voices are critical because of, not in spite of, their gender. When men speak up against gender disparities or gender discrimination, they not only become visible as allies who can be counted on to support industry or company initiatives to advance parity, they also foster awareness and acceptance about gender inequity as a shared problem, not a special interest.”

Or, as John Tracy, chairman and former CEO of Dot Foods, puts it: “From a business perspective, why in the world would you want to go out and only recruit from a portion of the talent pool? It makes no sense.”

Indeed, not only is men’s participation necessary to change the practices and norms that limit women’s advancement, but men themselves also stand to gain from disrupting the status quo, say Ammerman and Groysberg. The gender hierarchy that disadvantages women creates pitfalls for men, who are penalised if they don’t adhere to an idealised and rigid standard of male behaviour.

“For men, showing vulnerability and empathy, being warm and agreeable and expressing emotions (other than anger) have all been shown to elicit criticism. Even though these characteristics and behaviours are known to create greater trust and effectiveness within companies (indeed, executive coaches often work with clients to improve and enhance these exact traits), men who enact them are viewed as less competent and likable,” they say.

This is one of the numerous reasons why men may “retreat to the sidelines” in the fight to create workplace cultures where women can succeed. Some fear the stigma that comes along with prioritising caregiving, so fail to step outside traditional expectations. Some buy into zero-sum thinking about women’s gains as men’s losses. Others feel uncertain about their place in the conversation about gender equality. They may be anxious that efforts to advance women’s opportunities will be met with suspicion or dismissal by women, especially in the #MeToo era. How can men understand what it’s like for women?

But also countless studies have shown that men see gender as less of a barrier than women and that obstacles to female advancement are largely a thing of the past. In a 2020 Gallup poll, 42% of US men claimed that equality in the workplace has been achieved— double the proportion of women who agreed. As Ammerman and Groysberg note, if men tend to see structural barriers as minimal to non-existent, is it any wonder that they feel little incentive to advocate for women? Indeed, recent academic research has found that men’s lower support for workplace diversity initiatives is tied directly to the fact that men are less likely than women to believe that gender discrimination is the cause of unequal outcomes.

But even men who don’t view the world this way, who believe gender discrimination should be rectified, don’t always take action. One issue is a sense of unease as to whether their voice should be part of the debate. Should they take the lead on trying to solve these problems or else step back so women can be empowered to lead instead?

One series of studies looking at men’s participation in workplace gender parity initiatives found that men were indeed less engaged in such programmes than women, and their lower participation was driven by feelings that speaking up about gender issues wasn’t their place, even if they believed that promoting gender parity was important.

Crucially, say the authors, the research revealed that men’s sense of psychological standing could be shifted simply by talking about their stake in gender equality and highlighting the importance of men’s role in such initiatives. When companies and individuals frame the work of increasing gender equity as a collective imperative, men are empowered to take part.

Men’s interactions with other men are also key to advancing, or impeding, gender equity. By interrupting moments of bias or bigotry, men can foster, day by day, more gender-equal cultures. “Even minor instances of discrimination or harassment add up, and when men call them out, they delegitimise the attitudes and behaviours that marginalise their female colleagues. But there is a gap between men’s acknowledgment that sexism is wrong and their comfort with confronting it,” they say.

When men withdraw from the women they work with, they limit opportunities for their co-workers to learn important business information, hear about projects they could pursue, and increase their visibility, say Ammerman and Groysberg. Because men make up the majority of high-level decision makers, it is especially critical that they choose to develop and sponsor women.

But ultimately, enabling men to more fully show up in their lives outside of work is critical to advancing women’s opportunities in the workplace. Without a change to men’s roles, women’s careers will continue to be constrained by outsize burdens outside the office.

Men’s sense of psychological standing could be shifted simply by talking about their stake in gender equality and highlighting the importance of men’s role in such initiatives. When companies and individuals frame the work of increasing gender equity as a collective imperative, men are empowered to take part