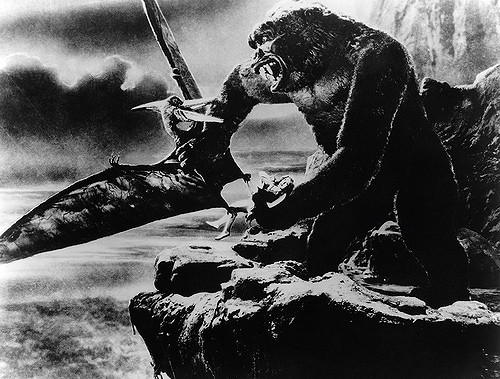 According to an unconfirmed anecdote, the Hollywood producers who were presented with the first script for King Kong said at the time: "Great story! But take out the ape." In our projects dealing with the digital transformation in organisations, we quite often feel like the screenwriter.

"And the organisational changes?"

"Hmm ... oh yeah, those ... let's worry about those later, these stories with agility and sprints and MVPs and positive error management culture ... very exciting, very innovative. But that's too complex, irritating, and creates unrest ... and opens a big can of worms ... after all, this is not California. Let's focus on what's important and start with an AR or AI pilot. A use case would be great!"

Organisational changes must take hold and momentum must be built up that drags people into the new direction like a vortex, before old thought processes, routines and comfort zones can be torn down, enabling new elements and ideas, new partnerships and the seedlings of a new culture to merge into a transformational engine. New technologies and ideas do not work in an old framework. History has shown this over and over, and not just in regards to technology.

That sounds disturbing and, admittedly, it is. Because change, by definition, has an open outcome. And it carries manifested risks – not least for one’s own career. And from a subjective perspective, they often outweigh the opportunities. Even if we know that change is necessary and unavoidable, as a decision maker we do not necessarily want to play the hero. We never want to be the one to get burnt: "I am going to go ahead and introduce the new technologies and set up a use case and take the first step into the digital age for our company. And those difficult soft topics, the agility and culture ... what topics?"

It turns out, however, that it's actually the others who get burnt, those who do nothing, who risk nothing, who manoeuvre and delay and skilfully throw away the opportunity while the iron is hot. When King Kong finally hit the cinemas in 1933, at the height of the worst depression America had ever seen, the film grossed a spectacular $1,761,000 – and in one shot revived the production company RKO. King Kong was a manifested disruption – the first film in a whole generation of highly successful horror stories, the first film starring a 'monster' in a lead role, the first film with a non-literary monster, the first film to seriously rely on special effects. Could it have been a disaster? Of course! If they had focussed on the essentials – and omitted the ape.

New technologies, roadmaps and mission statements are at best supporting elements. They are the necessary resource, backdrop and environment for the digital transformation, but they cannot turn it into a blockbuster.