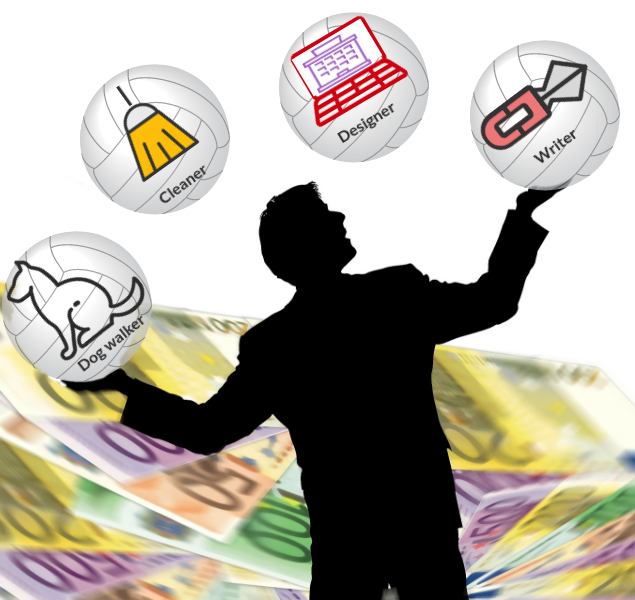 There has been much discussion about the 'gig economy' and its presentation as the future of work. It's now the life of 20-30% of all working people in the UK and the USA and that number is expanding fast. The happy picture of the wonderful gig world that awaits has been realised by a few but many are in a very different world. Yes, there are many enthusiastic freelancers happily working for a range of organisations with a good lifestyle but there are also even more enforced freelancers who do so out of desperation not out of choice.

The corporate world has been keen to promote the gig business model as an advancement of flexibility for workers to live the lives they want rather than being tied to standard employment practices. This is only half the picture. Yes, for the talented few the gig world has delivered freedom and a good life, but others have found themselves locked into a world of low wages, low hours or both and suffering from financial problems and stress.

Five decades ago the majority of people had a working life with one, or just a few, organisations. They were employees. In many countries the workers' rights fought for over the previous 100 years had come to create vital protections such as sick pay and regulation of dismissal to ensure due process. Over the past 25 years the financial cycles and changes in society boosted both the number of organisations an individual might work for over their career and the number that felt that self employment, at the appropriate time, might fit in with their personal needs. The emphasis had moved from loyalty to one organisation to viewing yourself as a marketable commodity for sale to the highest bidder.

That’s the perspective you hear from many but this only reflects those in a position to choose – those qualified and with skills or knowledge where employer demand is greater than market supply. For the majority of the workforce not in this fortunate position employers still had, and have, the ability to choose who works and dictate terms within the basic lowest common denominator standards laid down in regulation for employees.

The arrival of the 'gig economy' was promoted not by charitable employers wishing to enhance the flexibility of their employees, otherwise they would have retained the employed status and allowed flexible working. In the vast majority of cases the sole purpose of moving to the 'gig' model, be that self employed contractors or zero hours contracts, was to reduce costs and increase profits by being able to match day to day headcount to customer demand. In addition legally demanded employee benefits could be avoided, training not undertaken, employee tax due to the Government was saved, there was less time-consuming paperwork and all other employee protections, eg concering redundancy, dismissal and minimum wage, were removed.

Thus, for the reasonable employer, this was an opportunity to be more profitable but for the unscrupulous it was a green light for behaviour that had been outlawed as being unacceptable 100 years before. The financial crisis also gave employers more power over those individuals without high market value and the associated austerity forced many people to take any job on offer to survive.

An increasing problem in the gig economy is the arrival of the 'non-living' wage. The lack of legal employment status and high unemployment in some areas meant that organisations could pay any wage no matter how low. This produced an environment in areas of economic depression where they could essentially exploit people either via low wages or by low hours or both. In these areas evidence clearly exists of people having to work well over 12 hours a day on two, three or even four jobs to get a total income they can hardly survive on, or which even, week by week takes them slowly into more debt. Meanwhile the employers in UK often received significant government grants to set up in high unemployment areas.

McKinsey figures from 2016 in a survey across the USA and Europe suggest that about 160m people are in the gig economy and the breakdown is interesting:

Thus a minimum of 30% in the gig economy, some 55 million people, have been forced into it as there is no alternative. In the UK this is reflected in the financial wellbeing of the working population. Less than 25% of the UK working population have a credit score that is rated as good. Most of those will at some point go into debt. For many this is the point of no return. Of those who do 67% will be paying interest of more than 20% and 28% will be paying more that 100%. This just makes the situation worse week to week and month to month as the financial system slowly drives them further into debt. Now in the UK the combination of low income and high interest rates as inflation starts to bite due to the drop in the pound post the Brexit vote is building a debt, and thus social, time bomb. More widely there are also questions about why the 40% seeking casual additional income are doing so. At least some of these are probably because their primary employed job is not paying enough for them to survive. Thus other than the 30% who chose to join the gig world and earn their main income from it there are questions about its true value to 70% of individuals in it. Most would probably be better off being an employee receiving minimum wages.

This also presents challenges for governments where the traditional employment model ensures consistent and high levels of tax income from employment. This is now changing and the rise in the gig economy where individuals are not legally employees is causing concern over the potential to result in tax revenues declining. This at a time when government expenditure is already subject to severe pressure.

Not only that but downward pressure on pay of those in this environment and the resultant increase in corporate profit on the other side is making the wealth divide in societies even greater. Every year over the past 20 years by most measures the rich have got richer and the poor poorer; the ratio between senior executive pay and employee pay, let alone zero hours workers, has got greater.

There are implications about health costs here as well. Individuals in these environments are more likely to be ill and stop working for periods as a result. If employees, the employer covers this cost, if gig workers, this cost is moved across to the state and thus the Government and wider society.

Further, those who think this is having no social effect should look at the election results in the USA, the UK Brexit vote and the rise in populism we see around us.

The gig economy in its current uncontrolled form is accelerating this division in society and if it continues the results could move from discontent among large numbers to social unrest. The gig economy could, long term, present a threat to the stability of societies if its negative impacts are not addressed.

Some governments are starting to try to deal with these impacts. Recently the British Government published a report on this and courts in a number of countries have held that if someone works like an employee they are an employee, despite organisations' attempts to get around the legal status to make more money.

For governments it’s about ensuring that the rise of the gig economy is good for society as well as profitable for organisations. They need to put in place basic protections for individuals so that they cannot be pushed into a spiral of non-living wages when inevitably the Government has to pick up the bill of the consequences, be they financial, health or social.

But this is also a leadership issue and an issue about the role of organisations in society. Leaders and their organisations have to make the decision if they are prepared to promote policies and action that effectively exploit people to increase investor return; or do organisations have a role as a stakeholder in society and a duty to support that society rather than to damage it long term ? This goes to the heart of what leadership is really about, just doing the job or taking responsibility for your actions and their impact on others.

The corporate world has been keen to promote the gig business model as an advancement of flexibility for workers to live the lives they want rather than being tied to standard employment practices. This is only half the picture