Five reasons why robots won't take over the world 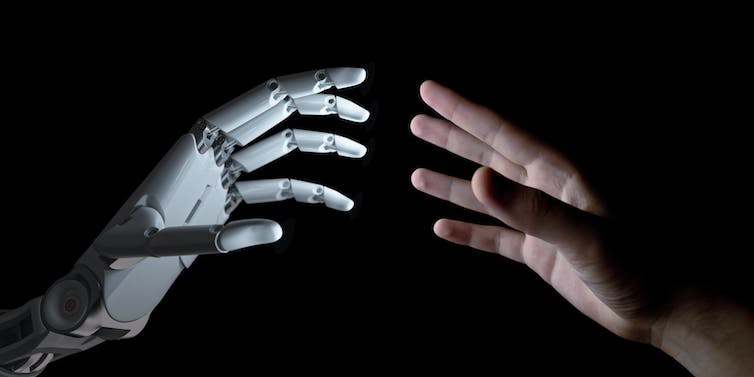 Scientists are known for making dramatic predictions about the future – and sinister robots are once again in the spotlight now that artificial intelligence has become a marketing tool for all sorts of different brands.

At the end of World War Two, it was stated that flying cars were just around the corner and that all energy problems would be solved by fusion energy by the end of the 20th century. But decades on, we don’t seem much closer to either of those predictions coming true.

So what’s with all this talk – fuelled by the likes of space baron, Elon Musk – about robots taking over the world?

Pessimists predict that robots will jeopardise jobs across the globe, and not only in industrial production. They claim robot journalists, robot doctors and robot lawyers will replace human experts. And, as a consequence of a melting down middle class, there will be mass poverty and political instability.

Optimists predict a new paradise where all the tedious problems of human relationships can be overcome by having a perfect life with easily replaceable robot partners, which will fulfil our basic needs as well as our deepest longings. And “work” will become an ancient concept.

The pessimists, however, can relax and the optimists need to cool their boots. As experts in the field of robotics, we believe that robots will be much more visible in the future, but – at least over the next two decades – they will be clearly recognisable as machines.

This is because there is still a long way to go before robots will be able to match a number of fundamental human skills. Here are five reasons why robots aren’t about to take over the world.

Scientists are far from replicating the complexity of human hands. The hands of robots that are used today in real applications are clumsy. The more sophisticated hands developed in labs are not robust enough and lack the dexterity of human hands.

There is no technical match for the magnificent human and animal skin that encompasses a variety of tactile sensors. This perception is required for complex manipulation. Also, the software that processes the input from the sensors in robots is nowhere near as sophisticated as the human brain when it comes to interpretation and reaction to the messages received from the tactile sensors.

Even if we had artificial hands comparable to human hands and sophisticated artificial skin, we would still need to be able to design a way to control them to manipulate objects in a human-like way. Human children take years to do this and the learning mechanisms are not understood.

Not all of what is technically possible needs to be built. Human reason could decide not to fully develop such robots, because of their potential harm to society. If, in many decades from now, the technical problems mentioned above are overcome so that complex human-like robots could be built, regulations could still prevent misuse.

Smooth out the edges

In our research project, SMOOTH, we design robots that we hope will operate in elderly care institutions by 2022. These robots will be used to solve repetitive tasks involving human and robot interaction, such as transporting laundry and waste, offering water to people or guiding them to the breakfast table.

It was necessary to simplify the robots as well as to carefully select the tasks they perform to ensure that they can be commercially viable products within four years.

Our approach wasn’t to solve the first three problems of human-like hands, tactile perception and control of manipulation, but to avoid those robotic roadblocks.

To address the fourth problem of human and robot interaction, we chose repetitive tasks to reduce complexity, since the expected interactions are – to a certain degree – predictable.

Robots are a reality today in industry and they will appear in public spaces in more complex shapes than robot vacuum cleaners. But in the next two decades, robots will not be human-like, even if they might look like humans. Instead they will remain sophisticated machines.

So you can stand down from any fear of a robot uprising in the near future.

This article was originally published on The Conversation on 19 April 2018. Read the original article here https://theconversation.com/five-reasons-why-robots-wont-take-over-the-world-94124
Robots
Robotics
Artificial Intelligence
Enjoyed this story?
Sign up for our newsletter here.