“Everyone’s going to want something different.” Preparing for the new workplace

Organisation, team or individual? Who will make the choice about how and where work is done going forward? Business leaders discussed this at an event organised by the UK’s CBI. The People Space listened in 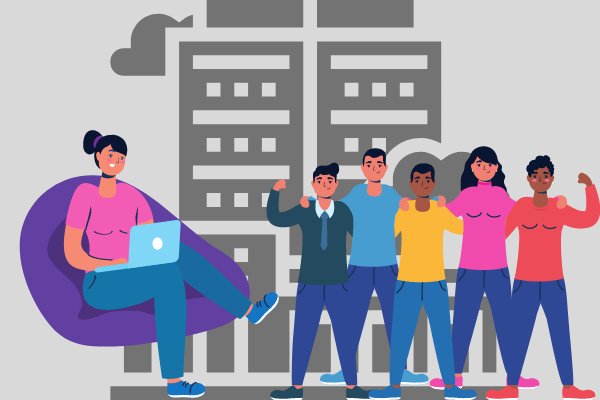 It’s a question many organisations are grappling with. How much is the new way of working going to be led by the individual and how much is an organisational decision?

“You’ve got to start by asking what’s right for the whole organisation, then go down a tier and ask how you make sure the teams are effective and functioning well together. Then have conversations around what is the individual’s preference but within that framework.

“And some individuals could say, this is my preference for how I would like to work in the future. It may be their existing role doesn’t suit perfectly but there may be roles that enable that degree of flexibility and where skills match and then employers can have the conversation about whether the individual would like to take advantage of that opportunity.”

Why is this issue particularly important now? Because businesses across the world are now planning for a post-pandemic world where people want to be more in control of where and how they work.

Looking at the white's of people's eyes

Jodie Coe, HR director at the Centre for Process Innovation, is keenly aware of this. Employing 502 people, the North-East England based company brings together industry, academia, government and investors to translate ideas into the marketplace. About a third of employees have site-based roles. The company was ahead of the curve, moving everyone to home-working a month before the UK’s first lockdown. By the middle of 2020 it was already receiving feedback in staff surveys asking whether it could become a permanent model.

“We took the strategic decision last year to move to hybrid working permanently,” says Coe. “The reason we did that is that employees were asking and we wanted 2021 to be focused on delivering the long term strategy for the organisation. So we thought, let’s get hybrid working off the table now.”

For Coe an ongoing challenge is enabling collaboration. “Getting around the table and really discussing and looking at the whites of people's eyes is really important for us to solve the problems of industry,” she says. “We’ve had to create what I call virtual brown paper exercises, which is a bit of a sticking plaster. We’re now planning to move away from rows of desks and individual meeting rooms to create collaboration spaces in the office so that people can come together and formally have these discussions. It’s important that we create the environment for those working from home to connect using technology and also create the environment physically at our facilities to enable that to happen as well. So we have to pull both levers.”

Over at Moneypenny, a 1,100 employee telephone answering company based in North Wales and with offices in Atlanta and London, group CEO Joanna Swash says she is working towards a hybrid model, something she wouldn’t have imagined previously.

“As a growing business, what was keeping me awake at the beginning of last year was the need for more office space. How do I continue to grow at this pace in the 100,000 sq ft that we're in now? And then it just changed overnight – and it almost solved that problem but it created a multitude of others.”

These included how to onboard new starters, given the firm’s heavy recruitment (some 350 people have joined since July 2020 ), how to help people struggling with technology at home and how to keep the company’s award-winning culture alive.

“There is not a one-size fits all approach,” says Swash. “Everybody is an individual and is going to want different things. And they are all going to need individual solutions.”

“There’s a big age divide there,” she notes. “The vast majority of the younger generation want to get straight back to the office and don't really want an element of home-working. We have people in the office at the moment but we have tons of space and anyone who comes in has to have a test. We have people who really struggled with the technology at home, they just couldn't do their jobs. And anybody from a mental health perspective who found it was not too good for them to be at home, they're in the office. And we’ve got the new starter cohorts – they come into the office. But sometimes older people and people in different situations need to make their life work in a bit of a different way.”

It's all about the culture

Swash believes 100% homeworking would be detrimental to the culture of the business. For that reason she envisages a 3:2 hybrid model in which technology is an enabler of culture – some of the time.

“I used to think that we had a brilliant culture because we've got the most amazing office space. But it's not that, it's a result of how you treat people, how you care for them and how you treat them as individuals. We use Facebook Workplace, which creates a sense of family. Whether you're in or whether you're not, you've got access to the same information. But we will also have whole company days in, maybe once a week, and whole team days in teams or a mixture of different people from different backgrounds and different ages,” she says.

“Our jobs have got infinitely harder. I have learned command and control doesn't work. As leaders now we have to be multi-skilled at engaging everybody. We have to look at all the details and make sure that we've got a really robust plan and not be frightened by the big problem.”

Coe says you need to look at the success of your hybrid model through different lenses. “I'm always a big believer of what you measure gets done,” she says. “So we're very clear on what our corporate measures are and we look at them through the lens of engagement. So we've got regular emojis and you click what emoji you're feeling at that moment in time, which is a fantastic tool. It takes a second and we get some really good feedback.

“Then we have a more formal net promoter score for employee engagement, which gives us a much more detailed review. And we also look very closely at productivity. We shouldn't shy away from this. We must continue to be productive with whatever we introduce.”

Swash agrees. “If you do want to work from home you will have to prove that you can work just as efficiently as you could in the office. I think that's really key. We'll do the right thing in the right way. I will take full responsibility for making sure that we can allow somebody to work from home and give them the tools and the resources that they need to succeed at that. But I have to have that level of productivity in the business,” she says.

CBI’s Fell suggests organisations spend equal amounts of time with both home-working and on-site groups in terms of working through why a decision has been taken so that people can understand and buy-in to that. He also urges companies to invest in training managers to enable neutrality when it comes to promotions and assessments.

“There are many reasons why this new way of working could be a good thing. Productivity, engagement, talent, attraction, retention and helping with diversity and inclusion. Get it right and it could be good for all those things. Get it wrong and it may not be detrimental.”

We wanted 2021 to be focused on delivering the long term strategy for the organisation. So we thought, let’s get hybrid working off the table now