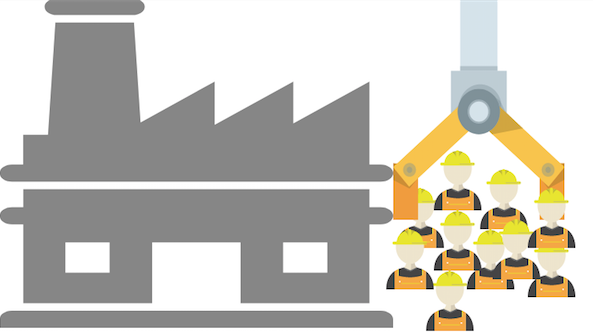 The application of digital technologies within UK industry will increase productivity and revenues, enable firms to pay higher wages and create more jobs, according to an independent review into how the country can harness the opportunities of the Fourth Industrial Revolution.

Increased competitiveness through the application of technologies such as artificial intelligence, robots, virtual and augmented reality, connectivity and additive manufacturing (3D printing) will lead to increasing sales, exports, return on capital employed and hence employment from the reinvestment of profit growth, says a report from the Made Smarter Review (previously Industrial Digitalisation review), which was announced in the Industrial Strategy Green Paper in January 2017.

With 2.6 million industrial robots expected to be deployed worldwide by 2019, the review estimates that 295,000 jobs will be lost through digital technologies but 470,000 new jobs will be created, resulting in a net gain of 175,000 jobs.

Industrial digital technologies will result in safer workplaces with fewer accidents and less exposure to harsh environments, improved job satisfaction through the replacement of dull and repetitive tasks and improved yield and quality through increased accuracy and repeatability. Human judgment and decision making will remain a core part of the workplace, says the report, Made Smarter 2017.

The findings are based on contributions from more than 200 organisations, including some of the biggest names in UK manufacturing as well as small businesses and academia. It suggests that productivity improvements of more than 25% by 2025 will eliminate the cost advantage of low-wage economies, encouraging companies to re-shore activities and locate closer to their domestic markets. Faster innovation and adoption of industrial digital technologies could positively impact UK manufacturing to the tune of £455 billion in the next decade, increasing manufacturing sector growth between 1.5-3% per year and resulting in the “conservative” estimated net gain of 175,000 jobs.

Digital technologies will themselves create new higher-paid forms of employment as many new roles emerge that did not previously exist, including those in new servitisation business models – where the customer pays for ‘use’ instead of ‘ownership’. 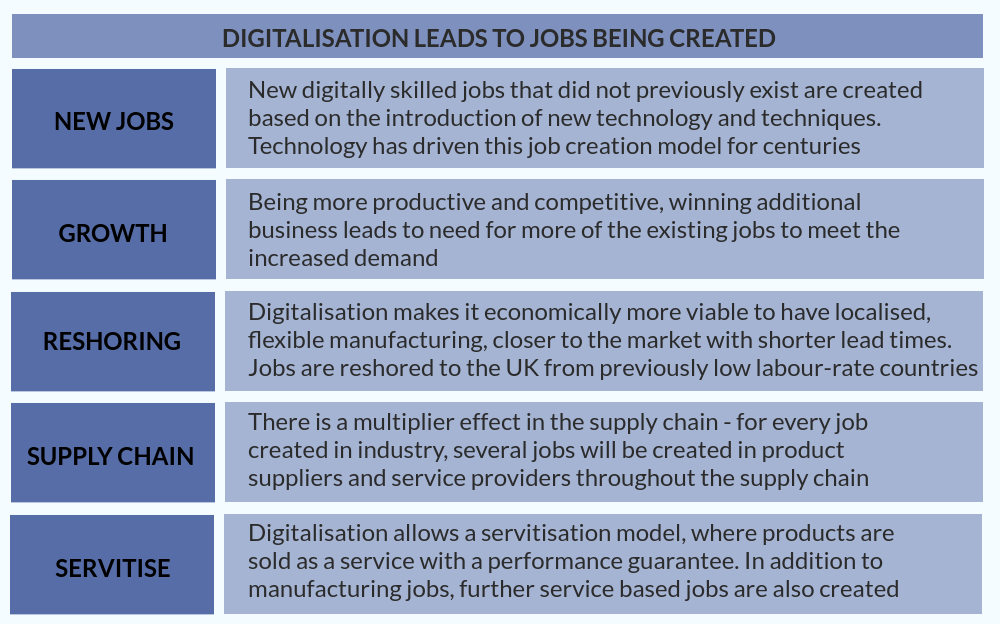 The report notes that a number of studies have shown a positive correlation between automation and jobs. Among these it cites the Centre for European Economic Research 2016 discussion paper which found that “overall, labour demand increased by 11.6 million jobs due to computerisation between 1999 and 2010 in the EU27, thus suggesting that the job-creating effect overcompensates the job-destroying effect”.

It also highlights work by the Boston Consulting Group on the effect of technology on the German economy which found that increases in employment depend on the rate of adoption of Industry 4.0 technology. Where German companies generate additional growth of 1% a year due to Industry 4.0 and achieve a 50% adoption rate of the technology, robots and computerisation reduced the number of jobs in assembly and production by about 610,000. But this was more than offset by the creation of 960,000 new jobs – a net increase of 350,000 jobs (5%). These new jobs come from demand for an additional 210,000 workers in IT and R&D, as well as 770,000 new jobs from revenue growth.

The report highlights three strategic challenges to be met if the “once-in-a-generation” opportunity to boost productivity, create new businesses, generate new jobs, support rising wages and increase exports is to be grasped.

It offers recommendations to achieve these, including building a national digital ecosystem that accelerates innovation and diffusion of digital technologies and upskilling a million industrial workers; creating 12 digital innovation hubs, eight large-scale demonstrators and five digital research centres as part of a new National Innovation Programme; and establishing a national body – the Made Smarter UK Commission – to develop the UK as a leader in the area.

Professor Juergen Maier, CEO of Siemens UK, who led the Made Smarter Review, says he has been disappointed during his more than 30 years in British industry that the country has not reached its full potential and has left too many of the opportunities of the Third Industrial Revolution to other nations.

“We have answered the call of government to set out a vision for growth and increased productivity,” he says.

“Industry is committed to working in partnership with government through a sector deal to revive UK manufacturing, and firmly believes that only this combined package of measures, which go beyond business as usual and historical offerings, will achieve the level of ambition needed for the UK to be a world leader of the Fourth Industrial Revolution. Focusing on the long-term challenge of the new industrial revolution will bring us together as a nation and make our country more prosperous.”

Improving productivity is vital for UK’s manufacturing, as well as business overall, as the UK exits the European Union and is fully exposed to the competitive pressures of the free market. According to the Bank of England around a third of UK businesses have experienced no productivity increase since 2000.

“If businesses are unable to stand on their own two feet they will fail, risking entire factories and industry-related supply chains and services. Therefore, the greatest threat to employment is not automation but an inability to remain competitive,” says the report.

The CBI says improving growth in manufacturing subsectors could boost the economy by as much as £30 billion by 2025, creating more than 500,000 jobs across UK regions. Enhancing the UK’s domestic supply chain could also create sustainable semi-skilled and skilled manufacturing jobs across the UK.

“Industrial digitalisation is a massive opportunity for UK industry and the wider economy,” says the report. “Get it wrong, and we risk further de-industrialising our economy and becoming ever more reliant on imports. Get it right, and we will have found the key to rebalancing and strengthening our economy, creating many new exciting and well-paid jobs and leading a renaissance for the UK as a true nation of creators and makers.”