Chief financial officers are almost half as likely to be promoted internally than HR chiefs, according to new research from Darla Moore School of Business which examines why this is the case 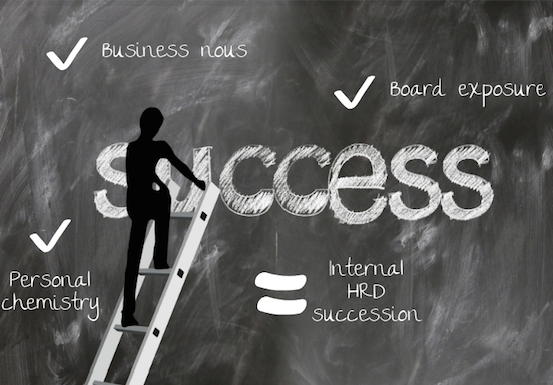 A perennial problem plaguing the HR profession revolves around the route to the top HR role in organisations. In some of my earliest work exploring the chief human resources officer (CHRO) role, the research revealed that CHROs were only promoted internally (from within HR within the organisation) at a 32-36% rate.

Some would defensively ask me: “Well, how is that different from other c-suite roles?” So, we began asking how the chief financial officer (CFO) and chief executive officer (CEO) came into their roles.

The figure below shows these comparisons in our 2017 HR@Moore Survey of Chief HR Officers. Consistent with past results, the CFO and CHRO routes to the top appear to be mirror opposites with 58% of CFOs promoted internally compared to only 32% of CHROs, and 58% of CHROs hired from outside compared to only 36% of CFOs. 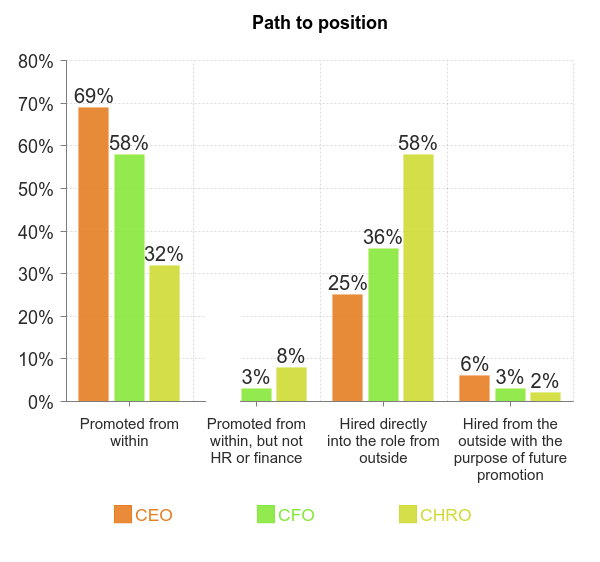 We asked about the ways in which the CFO prepared his/her potential successor and compared responses to a similar question on the 2014 survey regarding CHROs and found that the activities themselves (exposure to board/business leaders, rotations, coaching and so on) do not differ that significantly. So, it doesn’t seem to be that differences in succession practice account for the differences in internal promotion rates. So, why the differences?

When in doubt, go to the experts. We asked CHROs why they believed that CFOs are almost twice as likely to be promoted internally than CHROs. A number of explanations have been offered over time, but in response to our question, the most often cited reason was ‘insufficient internal CHRO succession’. To understand what that means, I need to put their answers into context.

If CEOs seek all three of these characteristics, one would be hard pressed to design a career path that ensures that an internal candidate demonstrates them, particularly in ways that would be visible to a new CEO. For instance, business unit HR leaders may possess strong business acumen and a business-focused perspective, and may have the opportunity to build a relationship with the CEO if they previously worked for that CEO within a business. However, such candidates do not receive board exposure as they do not have responsibility for executive compensation or talent, areas that work more closely with the board.

Leaders of executive compensation and talent gain significant exposure to the board, but come from an HR-focused background and may not have developed the necessary business acumen. In addition, they are not likely to have worked closely with the CEO to build the necessary chemistry.

In other words, one often refers to the ‘perfect storm’ of three negative forces coming together to create a synergistically negative outcome. In this case, the perfect storm may refer to three necessary conditions, each having a relatively low probability, needing to come together to form the ideal candidate. For a CEO looking internally, s/he knows (because of specific internal career data as well as any personal experience) it is necessary to be willing to sacrifice at least one of these three characteristics.

Hiring from the outside, however, presents a rosier (albeit actually cloudier) picture. An outside candidate in a CHRO role may signal to the CEO that the individual has both business acumen and an ability to navigate the board (whether true or not). Thus, the only thing left to assess is the chemistry. Too often this may be assessed in an interview and/or over dinner. Such short exposure does not expose the CEO to the ‘warts’ that are much more visible for internal candidates.

This challenge can be overcome with more proactive succession management within HR. CHROs should constantly manage a pool of three to six potential successors. First, these successors should move from reporting to one business leader to another, and usually these business leaders should be the ones on the CEO succession plan. A new CEO who has worked with three to four internal CHRO candidates has a deeper understanding of the potential chemistry as well as their relative levels of business acumen. Second, these potential successors should also serve in a board facing role, either in executive compensation or talent. These could be one to two year roles (stepping out of business unit HR roles) or they could be ‘double-hatted’ roles; a responsibility in addition to their business unit role.

When it comes to the failure to develop internal CHRO successors, it seems we have known of the problem for quite some time. Our recent work has shed light on the potential causes of the problem. Now it’s time to step up and start solving it.

Patrick M Wright is a contributor to ThePeopleSpace and Thomas C Vandiver Bicentennial chair in business and director Center for Executive Succession at Darla Moore School of Business
chief human resources officer
Succession Planning
Enjoyed this story?
Sign up for our newsletter here.