Millennials: entitled, lazy job hoppers. Gen X: cynical and poor team players. Baby Boomers: out of touch, independent, money-driven workaholics. And what about the iGen: those house-bound, tech-obsessed kids who were born with a smartphone in their hand? These stereotypes are bandied around regularly, but do five generations really want to be treated differently by employers?

For Life. For Work. 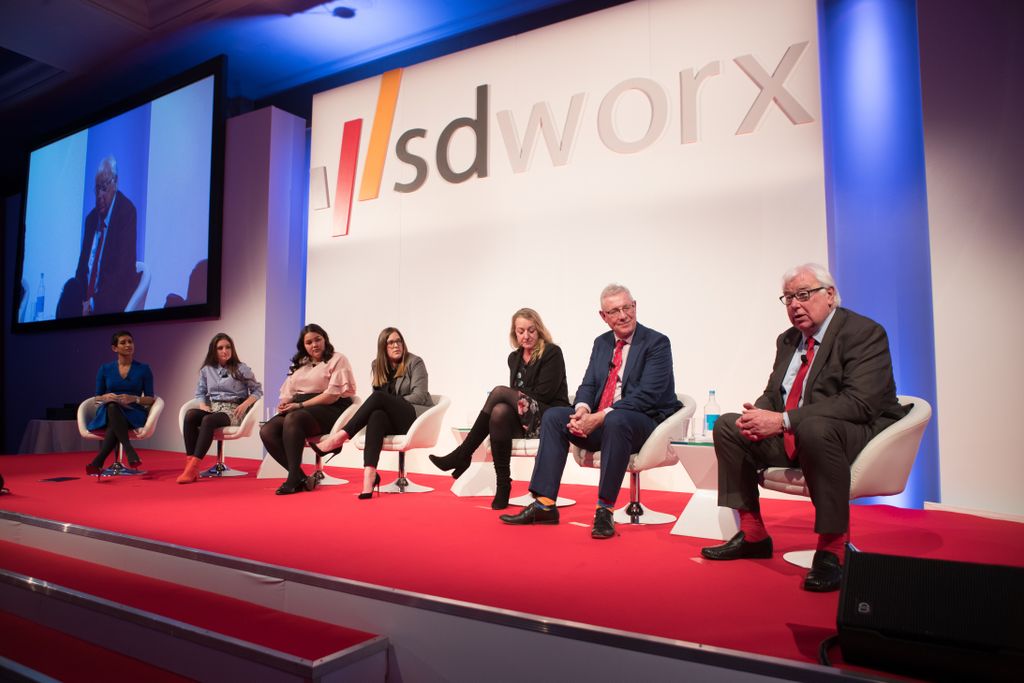 With most organisations now comprising five generations of employees, global payroll and HR service provider SD Worx decided to bring a panel together to discuss multigenerational collaboration at its European Conference last month.

The six-strong panel ranged from 15-year-old Pip to 73-year-old Stuart and had a combined age of 241.

Technology in the workplace

Let’s start with technology. Is there any difference in how each generation likes to receive communication regarding arranging a work meeting, for example? Well, our 15 year old panelist, Pip would prefer to be told via WhatsApp. But hang on, so would 56-year old Baby Boomer Henry. And 73-year-old traditionalist Stuart. Meanwhile Millennial leader Rebecca would use Skype, text or email to reach her team.

In fact, the consensus of the panel was that, preference is much less important than the method’s suitability for the message being conveyed. If it’s to communicate the minutes of a meeting, then one email to the 20 people who attended makes sense. If it’s to set up a meeting or check a date, then WhatsApp or even a personal assistant bot would work. But if it is to discuss something confidential or a serious message, then face-to-face is the most appropriate. It is important not to hide behind email and to ensure some face-to-face to build the team, the panel agreed.

What about attitudes towards work?

Unsurprisingly, this is dictated by personal circumstances and changing life-stage expectations rather than any set generational difference. So, 19-year-old Leanne has risen to a managerial position thanks to her hard work and choice to go to work rather than university. She is career-driven and thinks it’s up to the person if they want to achieve. However, money is not the main motivator, rather she is passionate about the job and wants her talent recognised.

Meanwhile, 45-year old Gen X-er Vickie grew up in the 1980s in a time of high unemployment. She was just grateful to get a job and realised she had to play the career game, so changed jobs every 18 months or so. Now she wants job security, work-life balance and a fair reward. Time is more important than money. This is similar to Millennial mother, Rebecca.

Baby Boomer Henry puts his defining moment as Punk Rock in the Seventies and the idea that you can do things the way you want to do them. He likes independence and dislikes rules. At 56, he recognises that his is the ‘lucky’ generation, benefiting from home ownership and pensions, and “can’t wait to get out of work”, even though he enjoys it. War baby Stuart came into work at a more formal time, when you called your work superiors Mr and Miss and were loyal to one employer. He worked for CEGB (the Central Electricity Generating Board) for 40 years, moving internally 17 times. He still works today, enjoying going to work and interacting with people of all generations. Meanwhile, iGen-er Pip is driven by challenges and hopes work will help her to build her skills.

How do they feel they are perceived at work?

Stuart says it is easy for older people to feel patronised and take offence but the key thing is to feel you are making a meaningful contribution. As one of the youngest managers, Leanne is no stranger to comments such as “I could be your dad” or “So, the film Titanic is actually real history to you”. But she has never been told she is too young to be a manager. Meanwhile, Rebecca is half the age of one of her colleagues and calls him her “work-dad”.

All generations expect to be treated with respect and to respect their colleagues. If you’re not using WhatsApp someplace in your workforce communication, you are missing out. And, at the end of the day, there is no evidence of inter-generational conflict so be careful of stereotyping. Every individual is unique and the job of employers is to bring everyone together to benefit from each other’s skillsets, learn from each other and collaborate while enabling each individual to feel empowered to be themselves and to have a voice.

If you’re not using WhatsApp someplace in your workforce communication, you are missing out