The more diversity talk at the top, the less diversity action

Diversity fatigue, high turnover of D&I heads and a negative correlation between talk and action means female leadership diversity is still a ‘war of attrition’. We need a better return-on-rhetoric 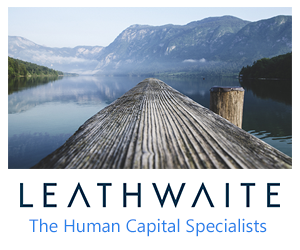 When Shemara Wikramanayake was appointed CEO of Australia’s Macquarie Group in July 2018, the press was breathless with excitement. A woman at the top of one of the big 50 global banks. The first female leader in Macquarie’s history. The only female leader within the top 20 Australian companies by market capitalisation. Bravo, or should I say Good on Ya Sheila?

Buried beneath all this is the fact that Wikramanayake had transformed the asset management arm of the Macquarie, creating a business that manages AUD 495bn ($370bn) and contributes two thirds of group profits. Now call me a drongo, but could this perhaps have had just a little impact on the appointment?

Of course, the reason Wikramanayake’s gender made the headlines is because across the corporate world, and despite many millions of pounds being invested in diversity and inclusion (D&I) efforts every year, female representation at leadership level is still woefully inadequate (and that’s before we talk about BAME representation). Yet the World Economic Forum estimates that closing the gender representation gap could add $250bn to the UK GDP and almost $2trillion to that of the US.

Which is why a report from human capital specialist Leathwaite makes interesting reading. For it finds that, the more corporations talk about female representation at leadership level, the less successful they are at embedding it.

Leathwaite measured the female percentage representation in the executive committee and supervisory boards against the use of the word ‘diversity’ in their annual reports among the 50 largest companies in the US and UK. It found the level to which companies mention diversity in corporate reporting is negatively correlated (-0.27) to the female representation within the leadership of their company. 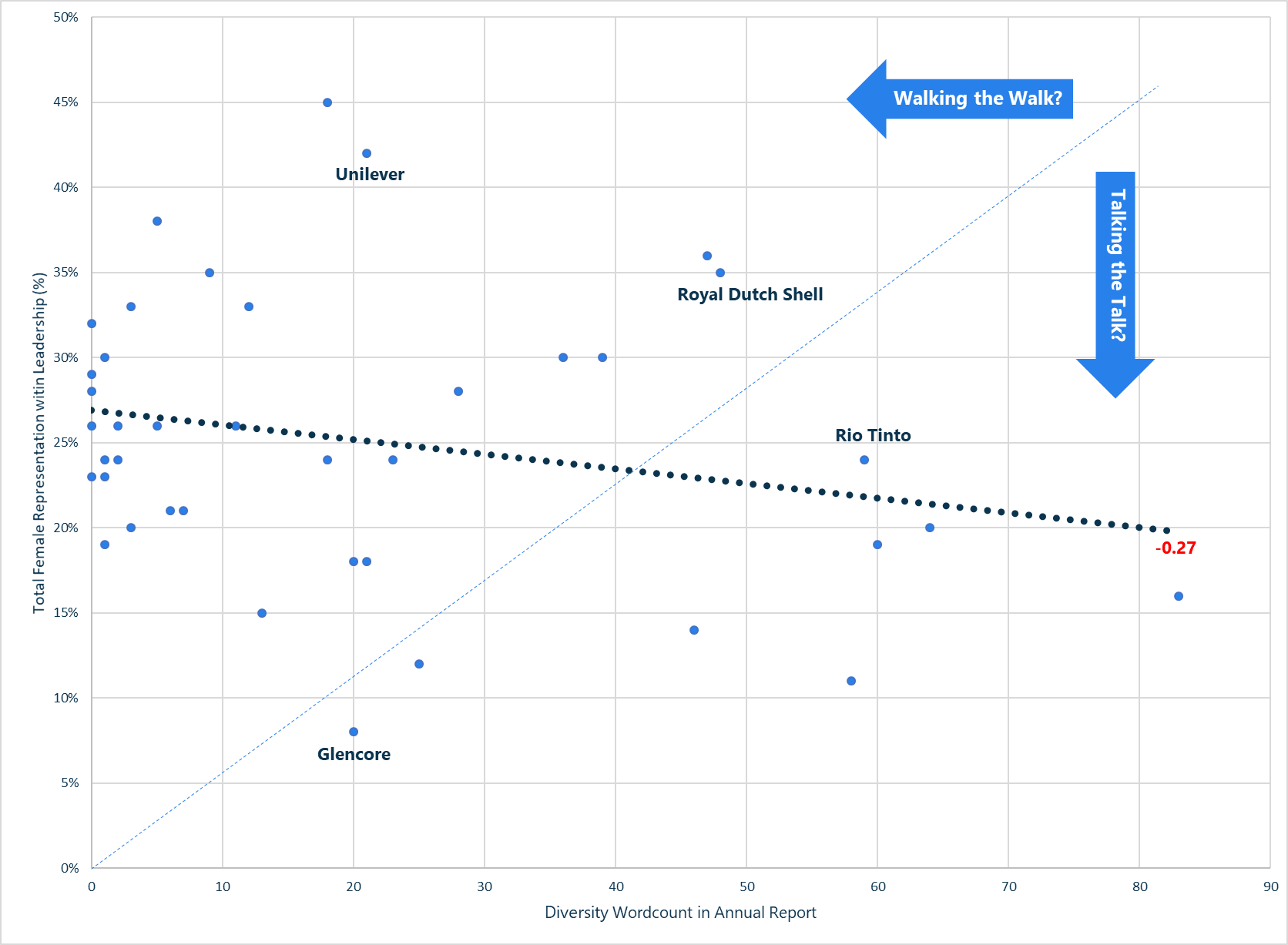 “No one can say the corporate world isn’t trying where diversity and inclusion (D&I) is concerned. But who can demonstrate a better return-on-rhetoric, where diversity at the top table is concerned? Despite significant investment and profile, corporate D&I remains a war of attrition, with women leading only 4% of the world’s largest banks, 3% of food processing companies and 6% of the world’s largest pharmaceutical companies,” say the report authors.

“In an era where the next quarter is as long-term as it gets for many, trying to build a sustainably diverse workforce is juxtaposed against short-term thinking, and in many cases, it is the same people in the c-suite who are ‘on message’ about diversity, that are driving this short-termism.” 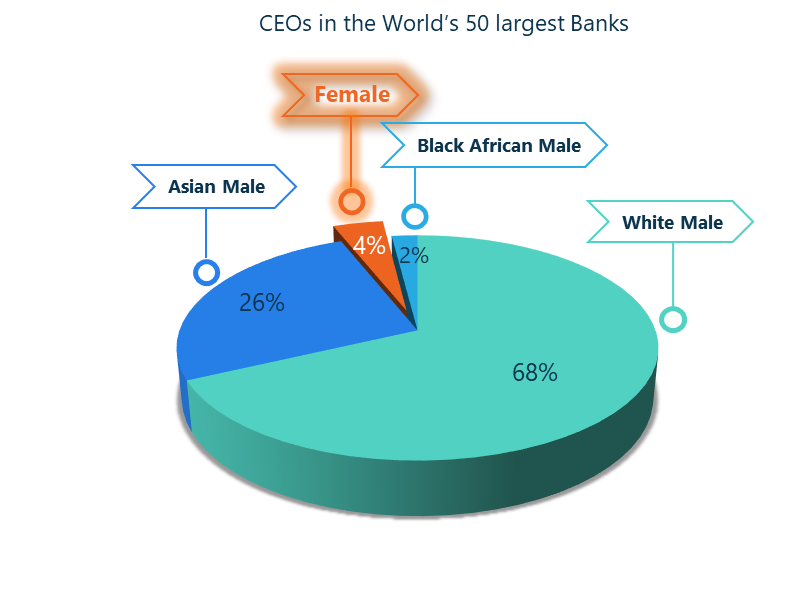 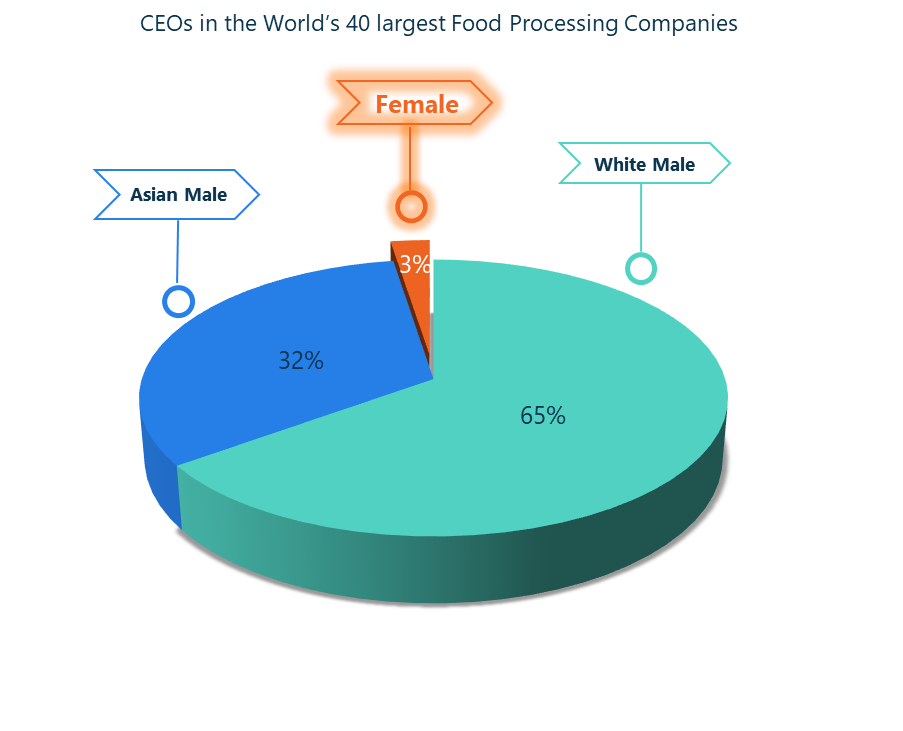 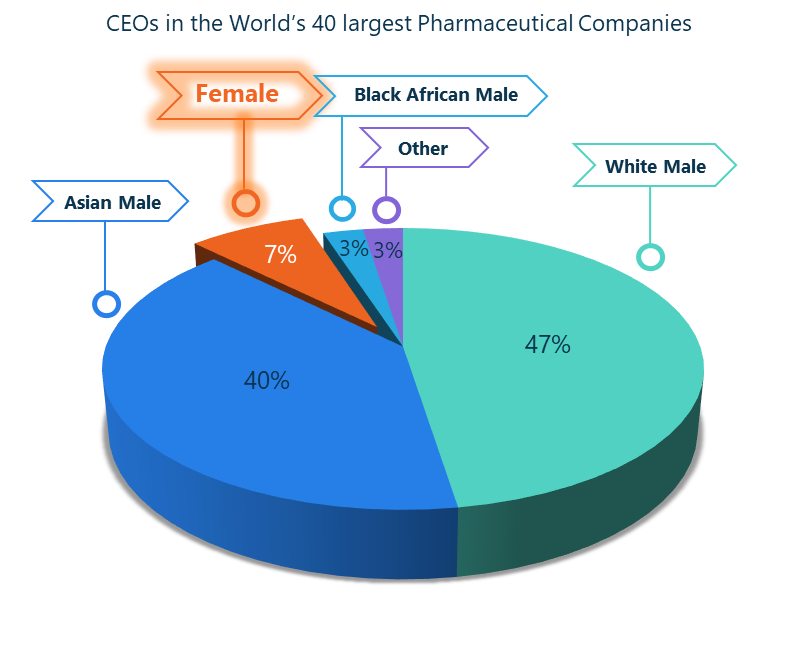 Leathwaite identifies three issues frustrating the ability of existing D&I efforts to deliver the changes both desired and required:

The ‘inclusion’ in diversity and inclusion, the practical application of diversity or the ‘effective management of differences’, is under-represented and its importance critically misunderstood by many. This can lead to the assumption that simply having the right demographics alone is enough to harness the power of a diverse team.

“Ensuring that the optics around the table are right, is not enough – inclusive management drives creativity & engagement within the workforce and ensures that the backgrounds of the workforce are best-leveraged,” say the authors.

The apparent lack of progress on D&I is leading to a level of inertia internally. This can manifest itself in hopelessness as staff suspect leadership is just talking the talk without truly buying into the argument. D&I can look like an “unwinnable war”, with the workforce looking the same as ever and management being told to build a diverse team without receiving the training and tools to achieve this. As Leathwaite says: “Like pounding the treadmill daily and still weighing the same (or more) at the end of the week, the danger with corporate messaging on D&I is that it starts to feel very repetitive very quickly if people do not see change and results.”

There is also the danger of incumbent staff feeling marginalised, if they feel talent is secondary to box-ticking. Leathwaite points to anecdotal evidence suggesting that white male middle-management in some organisations is becoming disenfranchised and where internal promotion paths are concerned, feels significantly impaired relative to the external field before the race is even run. It calls this the “marginalisation of the many”.

Or not. What do whizzy tech start-ups do when they realise they have fallen foul of discrimination law or have developed a corporate culture straight out of a Lads' magazine (and more importantly, have been found out)? Appoint a head of diversity and inclusion of course. This high-visibility role provides the overarching frameworks, strategies and policies to enable diversity to become ‘real’ throughout the organisation. But, as Leathwaite points out, often they are on a hiding to nothing from day one.

“At best, heralded as an inspirational thought-leader and agent for change, and at worst maligned as a professional conference-hopper with no concept of practical business operations, the head of diversity & inclusion receives a significantly mixed-press in the corporate world,” it says.

“Placing the responsibility for progress on the shoulders of just one person is akin to hiring a fitness coach and firing them when everyone in the company doesn’t lose a kilo – they can draft fitness plans and suggest dietary information, but not everyone in the organisation will embrace and apply it most effectively,” says Leathwaite.

Perhaps that is why the average tenure for a head of D&I is just 31.5 months. “Heads of D&I are not staying put long enough to gain traction. When compared to the generally accepted view that the average c-suite tenure is more like five years, this feels like an overly liquid part of the talent market,” says Leathwaite.

So what can corporations do about this? Check out our story here for Leathwaite’s eight strategies for effecting diversity change.

AboutGet in TouchBecome a Brand PartnerPrivacy PolicyTerms of Use
© 2015-2021 The People Space. The People Space is a trading name of On and Off Communcations Limited (7051898).
Website by BrightPie.