Managers are struggling to operate strategically and lead innovation in Asia

Managers in China, Singapore and Hong Kong are not finding the space to try new ways of doing things, add value and help ensure future competitiveness according to a Roffey Park study 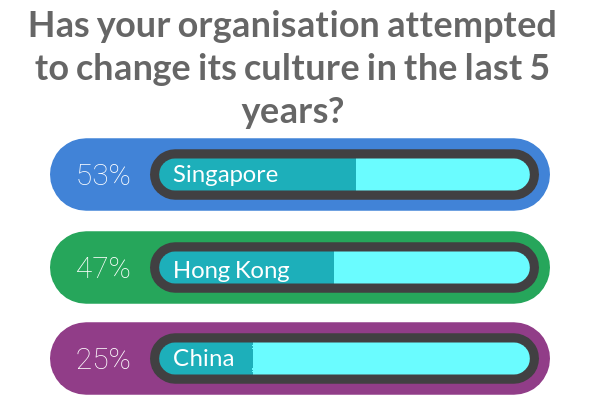 The most common leadership capability gaps in Singapore, Hong Kong, and China centre around the ability to foster a learning culture and engage employees in a shared purpose, according to Roffey Park’s second Working in Asia: Key HR and Leadership Priorities 2017 report.

The report, which covers the views of employees on working life across Singapore, Hong Kong and mainland China finds gaps also emerge in leaders’ capability to balance task and relational aspects of their role, in particular setting clear expectations and connecting with employees on a personal and emotional level.

These gaps are evident when barriers to organisational change are considered. The most common barriers, aside from individual resistance, are issues such as lack of direction, lack of employee involvement and lack of clarity about the purpose of change. It would seem, then, that there is much scope to enhance current leadership practice to better fit the prevailing context and challenges.

Strategic thinking and the ability to learn and innovate are crucial in a business environment characterised by constant change, shifting consumer demand and changing competitive landscapes

The majority of managers in Singapore, China and Hong Kong believe their organisation has the leadership and management capability to deliver against its strategic objectives –56% of managers in Singapore, 62% in Hong Kong and 65% in China. In Singapore and Hong Kong, c-suite leaders and non-managers were more likely to agree that their organisation had the leadership capability it needed compared with senior and middle managers.

Despite finding that the majority of managers had a positive view of leadership capability in their organisation, there appear significant and consistent gaps in capability across the three countries surveyed. The two main gaps appear to be the ability or opportunity to think strategically and set direction, and the capacity to learn and innovate. Roughly one in two managers across Singapore, Hong Kong and China view the ability to see the big picture, identify opportunities and set direction as key leadership capability gaps. Roughly similar proportions identified a lack of ability or capacity to facilitate learning, creativity and innovation as key capabilities missing from leadership. Both these, strategic thinking and the ability to learn and innovate, are crucial in a business environment characterised by constant change, shifting consumer demand and changing competitive landscapes.

It appears from our data that managers are struggling to balance operational and strategic pressures. One third (33%) of managers in Singapore identify this as their top challenge, alongside maintaining employee engagement (31%) and managing politics (27%). A similar proportion of managers in China (34%) identify strategic pressures as their key challenge. It would seem, then, that perhaps as a result of pressures to do more with less, managers are not finding the space to try new ways of doing things, add value, and help ensure future competitiveness.

We asked managers responding to our survey about the effectiveness of their line manager’s using questions based on the SCARF model, a model of human motivation. SCARF has five domains of human social experience: Status, Certainty, Autonomy, Relatedness and Fairness. SCARF is based on the premise that our brains are wired to minimise threats and maximise rewards. Across the five domains, leaders tend to be rated less well on the Certainty (‘setting clear expectations’ in the survey) and Relatedness (‘connecting with you on a personal and emotional level’) dimensions. It seems, then, that leaders may be struggling to balance more task-related functions with more interpersonal aspects of their role. 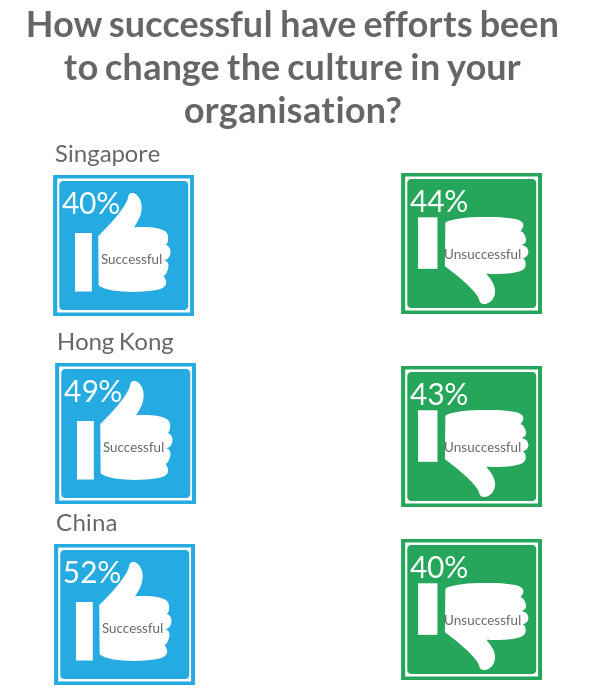 Managing change continues to be a challenge

The risk here is that other, more systemic barriers to change are overlooked in favour of an explanation focused on the reluctance of individuals to change ways of working. Some 40% or more of managers across the three countries identify a lack of leadership, employee involvement, transparency around the purpose of change and lack of proper communication as barriers. One is left wondering whether if these issues were properly addressed, individual resistance to change may be less of an issue than currently people seem to think.

While individual resistance to change is the most commonly identified barrier to change, it appears that the majority of organisations could be doing more to support employees to cope with that change. Only 37% of managers in Singapore, 40% in Hong Kong, and 49% in China say that their organisation is helping them to cope with change.